We Are All Pamela Geller 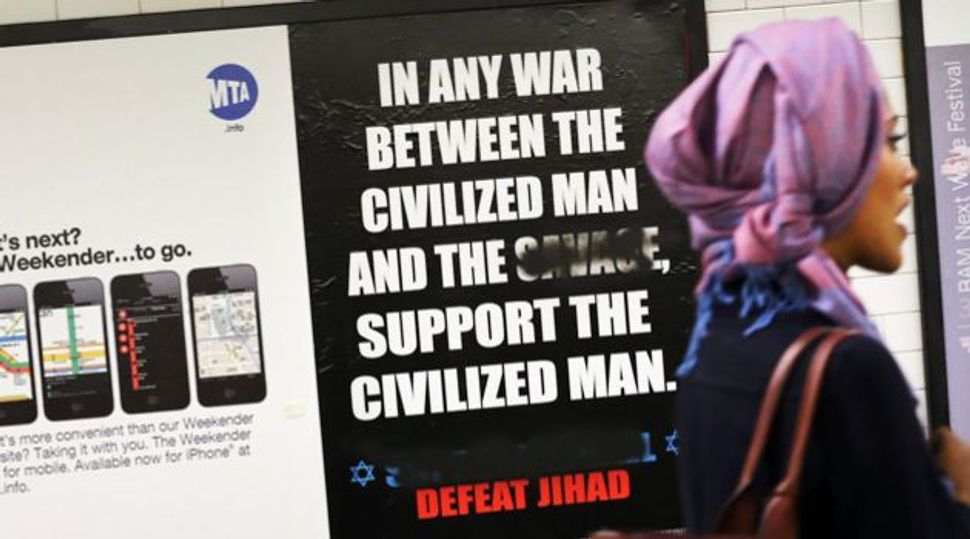 Hate: One of Geller’s ads posted in the New York subway system. Image by Getty Images

Well, now we know what it takes to stop Pamela Geller’s crusade against terrorism: an actual victim of it.

Condemned by such noted liberals as the ADL, Dinesh D’Souza, and the Daily News, banned by the Great Neck Synagogue (but embraced by Chabad), Geller is the anti-Muslim wacko who takes ads on buses and subways to remind us all that followers of Islam are “savages” and that there’s no such thing as a moderate Muslim. (Someone better inform Dr. Oz.)

Until yesterday, Geller was planning another assault on the citizens of New York, in the form of hateful bus and subway ads. But at the 11th hour, reason intervened, in the form of the family of James Foley, one of the Islamic State’s victims, who asked that Geller pull the ads.

The Foley family succeeded where an array of activists and municipalities have failed. Say what you will about Geller’s politics, her legal counsel is excellent. Her organization, the American Freedom Defense Initiative — and its project, Stop the Islamicization of America — has won court victories that make it very difficult for the MTA, or its sister agencies in Boston, San Francisco, and Washington, D.C., to stop her. “Our hands are tied,” an MTA representative told the Daily News.

This is, after all, political speech, carefully lawyered to evade prosecution. And let’s remember that Geller has only committed to withdrawing those picturing Foley, which still leaves plenty of hate to be written on the subway walls.

Prior to the Foleys’ success, tactics have varied widely — with similarly varying results.

The best the MTA has been able to win is a disclaimer that SOIA’s views are not those of the MTA. Mayor Bill DiBlasio has proposed contemplation: Those “forced to view [the ads] can take comfort in the knowledge that we share a better, loftier and nobler view of humanity.” Alright.

Moderate Muslim organizations have started their own counter-protests: the #MyJihad campaign (which Geller has co-opted) and humor-based campaigns such as “Fighting Bigotry With Hilarious Posters,” which warns us that “the Muslims are coming — to your radiology department.” Nice.

And enterprising activists have made an art form out of directly “modifying” Geller’s posters, sometimes just with black spray paint but other times with pictures of Geller herself and witty speech-bubbles like “I’m obsessed and must struggle to stop.” I won’t name acronyms, but some left-leaning Jewish organizations have gotten in on the act too.

Here, however, I’d like to take a different tack.

Geller’s ads may have been pulled, but her presence is still felt keenly in our community, and I think it’s too easy to focus on Geller as a racist clown, thus giving all the rest of us a free pass. Geller is like a pro-Israel Barry Goldwater: in our hearts, many in our community believe her to be right.

So, rather than Di-Blasian self-satisfaction, I’d like to invite the exact opposite: self-questioning. It’s highly appropriate for this season of repentance, and it is a lot more productive. We should be asking ourselves: What views do I hold that enable, or resemble, such extremism? If I’m on the Left, do I call out my friends when their anti-Zionism slides into anti-Semitism? And if I’m on the Right, do I hold myself and my friends accountable for views which border on bigotry?

Let me give some examples, direct from Geller herself.

One of Geller’s new ads states that “Hamas is ISIS, Hamas is Al-Qaeda, Hamas is Boko Haram, Hamas is CAIR in America.” Factually, this is quite false. In fact, while Hamas has nominally supported ISIS in Syria — thus damaging ties with its historic sponsor, Iran — the Islamic State is a Salafist jihadist/fundamentalist movement that regards Hamas as impure and the Israel/Palestinian conflict as largely irrelevant. In fact, Hamas’s best friend today is Qatar, which is in the coalition opposing the Islamic State. Unsurprisingly, Geller is just ignorant here.

Now I want to turn the question inward. Have I learned enough about the differences among Muslim groups, or do I reduce them all to the “Them” in an Us/Them dichotomy? Do I recognize that all religious and national groups have their moderates and extremists? That Paul Ryan isn’t Bill O’Reilly isn’t Pamela Geller — even if they’ve all intersected at times?

And do I appreciate the consequences for American civil society if I were really to believe, as another Geller ad insists, that “yesterday’s moderate is today’s headline”? Is everyone who has an expansive view of the Second Amendment the same as mass shooters in Colorado and Connecticut? Is every conservative in the KKK? Do we see what this kind of thinking would mean?

Let’s take a second example. “Jew-hatred: It’s in the Quran,” an AFDI poster blares. And indeed, the Quran has many violent passages, including some about Jews — most notoriously 5:60, which says that “some” Jews have been transformed into “monkeys and pigs.” It is definitely triumphalist in nature. (See, e.g. 4:101, 66:9, 28:66.)

But have you read the Quran, cover to cover? Including verses like 2:256 (“Let there be no compulsion in religion. Truth has been made clear from error”), or the many similar exhortations in 6:107, 11:28, 42:8, 65:26, and elsewhere? Or, for that matter, 2:47, which exhorts “Children of Israel! Call to mind the favor which I bestowed upon you, and that I preferred you to all other nations”?

To be sure, ISIS’s barbarianshave not lived up to these nobler teachings. Nor did the Crusaders, of course, live up to theirs.

And have you read the Hebrew Bible, cover to cover? Including Deuteronomy 7:2-3, which calls for the complete ethnic cleansing of the Land of Israel, along with similar exhortations in Numbers 31:7-18, Joshua 11:12-15, and elsewhere? And is not Judaism likewise triumphalist, sure that it is the one true religion?

All Western religions have teachings of peace and teachings of violence within them. All have followers who emphasize one or the other. All can be triumphalist, violent, and ethnocentric — or the opposite. In some times and places, the fundamentalists hold sway; in others, the moderates. This is reality.

And another irony: So are we, if we simply assume that Geller is over there, and I’m over here. Moderate/Extremist is just another Us/Them dichotomy — one that gives me a pass just as Geller’s Us/Them dichotomy gives her.

Actually, we are all Pamela Geller to some extent: She is simply the manifestation of the fearful, irrational, and hateful parts of each of us. There’s a Geller inside me and a Geller inside you. I can listen to that part of myself and “know she’s right.” Or I can listen to it, reflect on it, and explore whether that’s the voice I want to obey.

Indeed, what finally defeated Geller — in this particular battle at least — was nothing more and nothing less than basic human decency. A grieving family with every reason to support her vitriolic rhetoric has instead asked her to back off. They have risen above vengeance to something better.

Jay Michaelson is a contributing editor to The Forward.

We Are All Pamela Geller