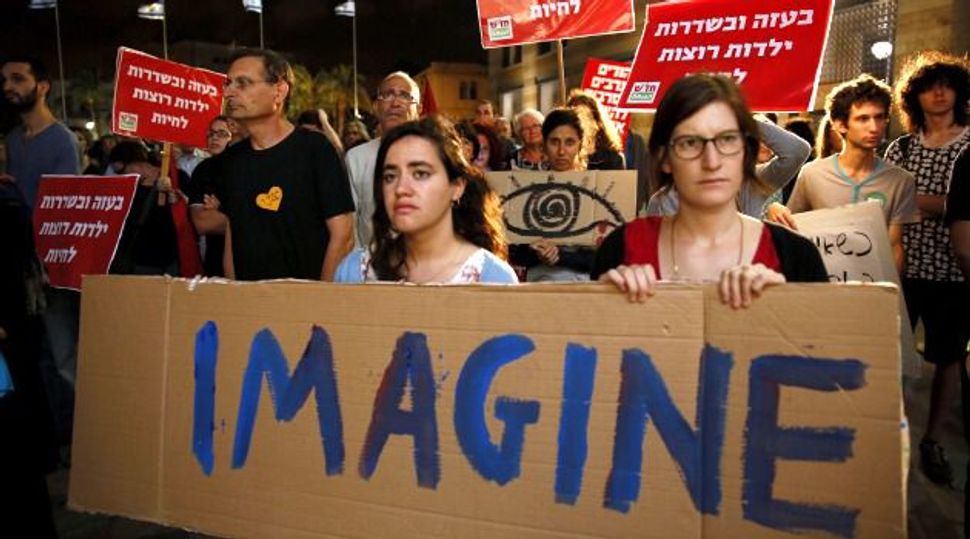 In Haaretz, Moshe Arens has accused the Israeli left of not accepting, first, that Israeli democracy is working fine, and second, the specific “verdict of the electorate.”

Arens’ framing of Israeli democracy is flawed because he leaves several important points out of his description. To begin with, the Israeli left doesn’t wonder why the system isn’t functioning; they know perfectly well that it is. It’s the incentives they’ve identified driving the vote that they want to change, not the system itself.

They’re worried about the apathy that characterizes recent Israeli voting patterns. In addition to a declining voter turnout rate — from between 70% and 90% from 1949 to 2003 to under 70% since then (though it has risen slightly since 2009) — the default pattern has for some time been the right-wing parties, particularly as the economy has been doing well. Israeli leftists understand that the voting public needs to be made aware of the price of maintaining that pattern — mostly occupation and settlement expansion and the moral, political, financial and security costs associated with them. They also know they need a stronger message than the right’s playing on general security threats and efforts to instill fear of those with different political ideologies and backgrounds.

Arens is right that the electorate has held the left accountable for Oslo, the withdrawal from Lebanon and even the withdrawal from Gaza. He might have added that the left-wing parties themselves haven’t been able to get beyond the old slogans that “ending the occupation” and “negotiated withdrawals” would make everything immediately better. But he might also have added that the right-wing parties haven’t gotten past their own outdated ideas.

The right, too, is responsible for major security lapses in Israel: It was under center-right and right-wing governments that Israel went to war against Hezbollah in 2006 and three times against Hamas, leading to the deaths of scores of Israelis and contributing to the disruption of life of millions of Israelis in the north and in the south. It has been right-wing governments since 1977 that have frayed ties with the United States, Israel’s most important ally, and driven Europe to slowly move toward what can only be called a boycott of products from the settlements.

It is the right that, once in power, has sought to curtail individual and communal freedoms. To give only a few examples, the right has: increased the financial support it gives to citizens living in wealthier areas outside the state (i.e., the West Bank) at the expense of those living in poorer areas within the state. The right has eliminated the freedom for any Israeli citizen to call for a boycott even of the settlements without even the need to demonstrate any material harm from such a call.

It has sought to make Israeli citizens pledge loyalty to Israel as a “Jewish, Zionist” state even while it knows the moral and ethical problem with forcing Arab citizens to make such a vow. It has tried to expand the ability of the government to secretly prosecute citizens for “terrorism,” without defining the scope of any of these activities. It continues to try to limit the ability of left-wing NGOs to criticize the state, or even to register as an NGO, and to fundraise outside of the country without applying the same restrictions to right-wing groups. It has also worked to curtail the independence of the Supreme Court and academic departments at Israeli universities, as well imposing on the latter “acceptable” events to be held on campuses, and to block participation of Arab political representatives in the political arena.

Sure, not all of these efforts have come to pass; some have been blocked by the prime minister, some watered down by cabinet discussion, and some declared too problematic by the Supreme Court.