Why Yom Kippur Tells Us To Fight Ebola 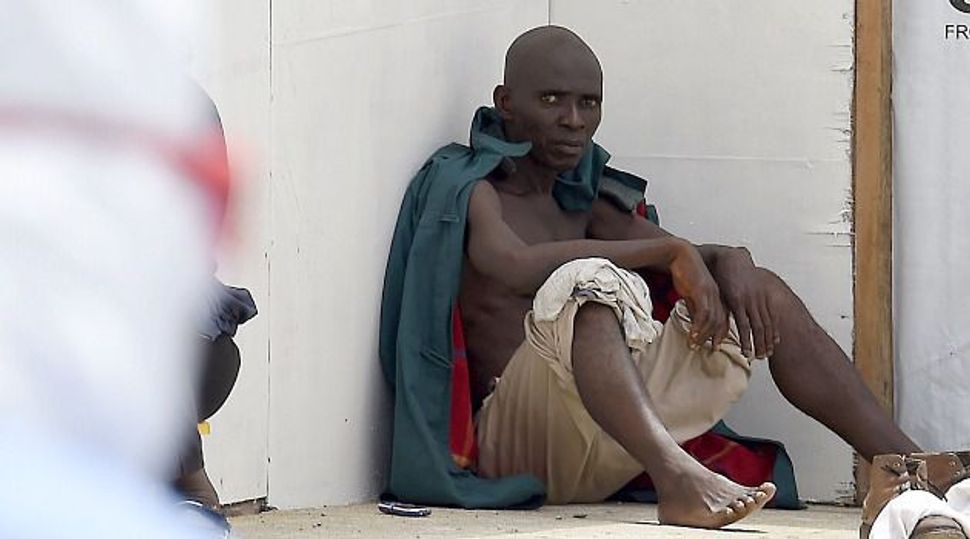 A newly arrived patient suspected of suffering from the Ebola virus sits on the ground at Island Hospital in Monrovia, Liberia./Getty Images

As Jews around the world prepare for Yom Kippur — a day when we pray to be “sealed in the Book of Life” for the year to come — the people of West Africa are struggling to save the lives of their loved ones from the Ebola outbreak, one of the most desperate crises of our day.

In Liberia, the country hardest hit by Ebola and one I last visited just two years ago, people are dying outside overcrowded hospitals. The bodies of those who have succumbed to the virus lie in the streets for days, awaiting burial. Ebola has already claimed the lives of more than 2,600 people in West Africa, and the World Health Organization, the Centers for Disease Control and Prevention and other authorities have estimated that it might infect between 20,000 and 1.4 million more before the outbreak is contained. Clearly, the book of life is closing far too early for many West Africans.

The virus is spreading like wildfire, in part because many people don’t understand how it is transmitted. Some communities view Ebola as something caused by evil spirits; others think it’s a government conspiracy. In some parts of Liberia, Ebola is inadvertently spread by traditional healers.

Fear is also fueling the epidemic. Neighbors are accusing neighbors of inflicting a curse. Not surprisingly, those who fall ill — and the families they leave behind — are marked with stigma and shunned. The epidemic has also sparked violence, as the Liberian government has sent armed soldiers to cordon off slums and impose quarantines — often with no warning.

As Jews, these developments are chilling. We know too much about human suffering as a consequence of panic and fear, dating from Medieval times when Jews were blamed for the spread of the plague—and from Nazi Germany, when we were depicted as vermin-like carriers of illness.

Our history and our ethical values — especially our deep belief that every human is created in the image of the creator — command us to act and support those who are struggling with this epidemic and the hysteria it is generating.

That’s why American Jewish World Service is supporting trusted community groups in Liberia who are working to quell the panic and to share important public health information that can help bring the Ebola outbreak to an end. These local groups are now going into communities that trust them, to dispel misinformation about how the virus spreads, calm people’s fears and encourage a rational response.

Our grantees are using creative methods for educating people in a country with high illiteracy rates. An organization called Mano River Women Peace Network Liberia is sharing information via its radio programs; using local languages, they are teaching people to tend to the ill and bury the dead safely. Another group, Grassroots Agency for Social Services, has trained community volunteers to go door-to-door, sharing the truth about the virus and teaching people to sanitize their homes.

But community education is just one part of the help needed to save lives. Liberia recently emerged from 14 years of civil war, and the country simply does not have the infrastructure to handle the current crisis.

Our partners in Liberia are calling for a major increase in direct international intervention to control the epidemic. That means more medical facilities where testing, diagnosis and quarantine care can be safely and humanely carried out, along with ambulances, helicopters and personal protection equipment for the brave and dedicated people who provide medical and burial services.

If some communities must face quarantine, governments and aid agencies need to ensure that they can still access food, water and medical care. Efforts to save people from Ebola must be designed carefully so as not to harm them in the process.

Finally, I hope that governments and aid agencies will recognize the unique ability of community-based organizations to help resolve this crisis. By providing these local groups with adequate support, we can help stop the spread of the disease—and of the fear, misinformation and mistrust that have fueled it.

This Yom Kippur, let’s take stock of ourselves and ensure that our brothers and sisters in West Africa get the help they need to overcome Ebola. We cannot stand idly by as others die. Our merits this year are not just measured by how we relate to the creator of this universe, but how we respond when our fellow human beings are in desperate need.

Why Yom Kippur Tells Us To Fight Ebola