Who By the Sword? 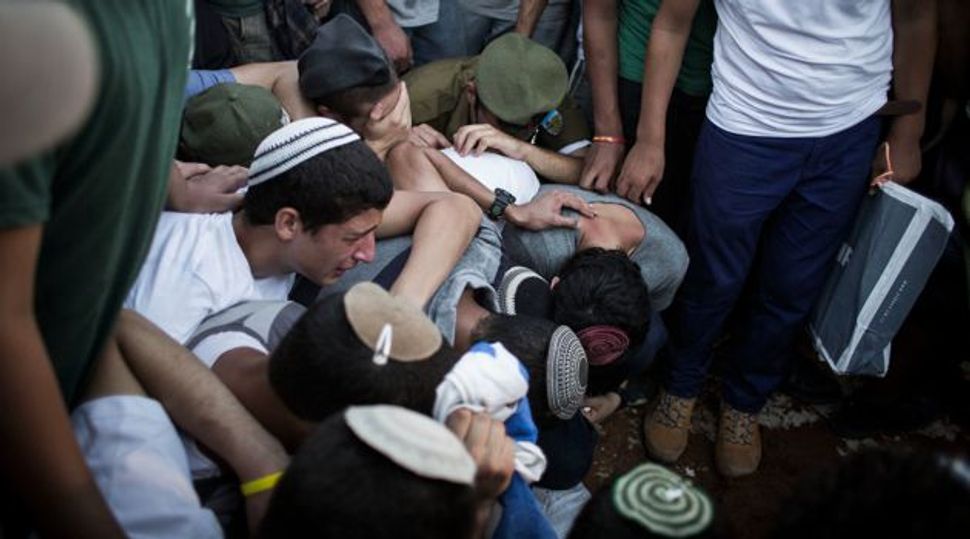 Mourning: The funeral of Naftali Fraenkel. Image by Getty Images

Rachelle Fraenkel, the mother of Naftali Fraenkel , one of three boys kidnapped and murdered by terrorists in Israel this past summer, said in a recent interview that “because I pray a lot, that does not mean that God owes me anything.” That is one way to cope theologically with a brutal event. The other way, firmly embedded in classical Judaism, are the words of perhaps the best known prayer of the High Holy Days: ” On Rosh Hashanah it is written, and on Yom Kippur it is sealed… Who shall live, who will die… who will live a long life and who will come to an untimely end, who ( will die) by the sword…” Painful as it may be humanly and theologically, did Naftali Fraenkel die by the sword because it was sealed so by the Almighty last Yom Kippur?

That divinely decreed fatalism is the feeling many of us take from that prayer — Unetaneh Tokef — which we will recite on these High Holy Days. “All that lives on earth will pass before you like a flock of sheep….” It continues, We are the sheep and God is “the judge, prosecutor, expert…completing the indictment.”

I also understood it that way, until a colleague and former student of mine, Rabbi Elie Kaunfner, executive director and co- founder of Machon Hadar, taught me that it likely has a far different meaning.

That other meaning is revealed in the 180 degree turn from imagery of a court of judgement in the first half of Unetaneh Tokef to a far different imagery of a shepherd and flock in the second half.

Many of that second half of Unetaneh Tokef are direct quotations from the Bible. In the Bible, though, each phrase means something quite distant from stern judicial imagery;

Let’s see how and where that happens in quotations from the prayer:

A: “All lives are like sheep which pass before God as a flock before a shepherd.”

That phrase is taken from Ezekial chapter 34. There, God comes in to rescue sheep from careless shepherds. Because of shepherds’ neglect, the sheep have strayed, been injured, and even been slaughtered by the shepherds! So here God is a caring and corrective force, not a punitive one.

B: ” As a shepherd examines his flock, making each sheep pass under his staff, you will review and number and count…determining the fate of everything in creation.”

Those words, first used in Leviticus, chapter 27:30 -34, refer to tithing. One could tithe seed, fruit, sheep or cattle. When the owner tithed herd or flock, he randomly extracted every tenth rather than purposely choosing a particular animal. The Torah also adds that : “He must not look out for good against bad….” So which animal is selected is random, irrespective of whether the shepherd ranks one sheep as better than another.

C: “You shall pass along and recount and review every living being.”

And how about the concluding piece de resistance of Unetaneh Tokef: “repentance, prayer, and charity may nullify the bad decree?” Usually, this is understood as “if you do these good things, bad things will not happen to you.” Is that really what it means?

Not really — that is, if we give attention to the original Biblical context of the quotations In A B and C which precede “repentance, prayer and charity may nullify the bad decree.” et’s review the flow of the whole message.

First ,Our fate this year will be random. That means that to some of us, unfortunately bad stuff will happen, not as the retribution of a judgmental God but just because bad things happen randomly.

Second, nevertheless, God will care for us through that bad stuff, as a master shepherd comes to care for neglected sheep, and may even gather us once again in our ancient Homeland. . Third, our deeds of “repentance, repentance. and charity,” — far from deflecting the bad of life, they may help to assuage the randomly wrecked, assist in gathering in the lost, and even contribute to our collective redemption in the ancient land.

Why the sharp difference between the severe trial imagery of the first half of Unetaneh Tokef, and the caring shepherd imagery of the second part? One cannot be sure. But perhaps the anonymous authors of the Mahzor, as it developed organically, who naturally stood anxiously in front of a New Year, seeing it as a trial with God, later eased that harshness with more comforting and soothing notions,

So does this different understanding of Unetaneh Tokef help us to grapple with our belief in God and the course of lives this year? I think so. After all, few of us would conclude that the Almighty declared the gut wrenching fate of poor Naftali Fraenkel…that he would perish “by the sword.” That sucks us into the tortuous Jobian questions “Why does a pious and moral young man suffer so, if God is just?” Or worse,”If that is God’s decree, than give me nothing of God or God’s agenda.” Better the other message of Unetaneh Tokef, that it was, is, and shall be random. God still cares and protects, though, and our deeds may soften the blow.

Gerald L. Zelizer is the rabbi of Congregation Neve Shalom in Metuchen, N.J.

Who By the Sword?