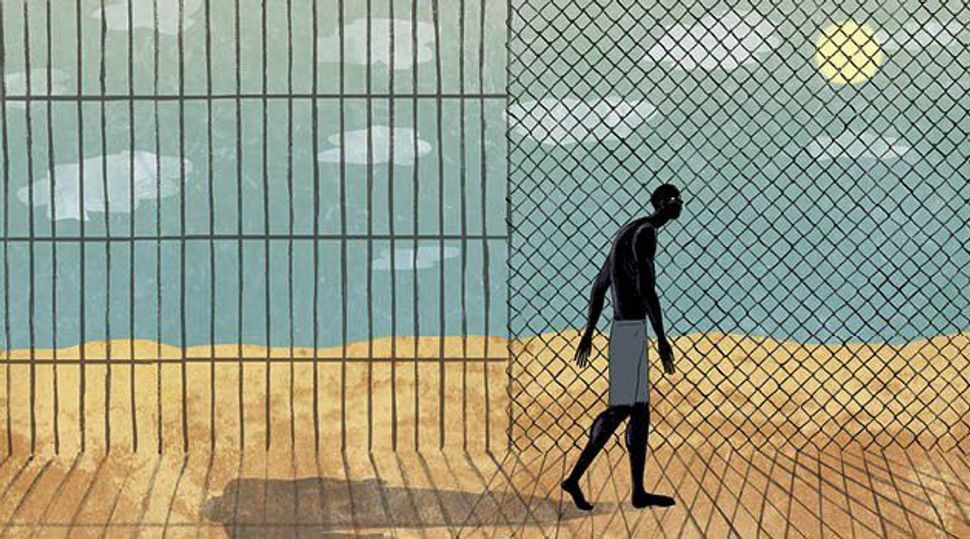 “There is no asylum seeker problem in Israel.”

So said Netanyahu when, following his recent address to members of the Jewish Federations of North America in New York, one of the attendees raised the issue of African asylum-seekers.

“They are illegal job immigrants,” the Israeli prime minister said, adding: “Asylum seekers can come in like those from Syria — but not job seekers from Africa.”

There are a few problems with this.

First of all, while all of Syria’s other neighbors have welcomed thousands of Syrian refugees (Turkey and Lebanon each host over one million Syrian refugees), Israel has accepted none. Israel does welcome Syrians who’ve been injured in the ongoing civil war in the country and offer them top-notch medical treatment free of charge. Most patients are interested in returning, but even in cases when they are not, they are deported back to a country engulfed in war. Thus, the State opposed the petition filed to the High Court by a 17-year-old Syrian girl who was treated in Israel and wished to remain here. She was deported to Syria in early 2014.

But, more than that, there’s the fact that about 48,000 African migrants reside in Israel. The government insists that they are “illegal work infiltrators.” Is that true — or are they refugees who would face persecution if returned to their homelands?

Most asylum-seekers in Israel (about 73% according to the Ministry of Interior) are Eritreans, while 19% are from Sudan. Before Israel completed the construction of the fence along the Israeli-Egyptian border in 2012, migrants from various African countries would enter Israel through the border. Those migrants would be detained and immediately deported to their countries of origin. Migrant workers from mostly Asian countries who’ve been invited to Israel and overstayed their visa are also routinely detained and deported. If the Eritrean and Sudanese are actually illegal work migrants, why doesn’t Israel deport them to their countries of origin?

Israel does not deport them because it would be illegal under Israeli and international law, which prohibits deporting a person to a place where their life or liberty would be at risk. This principle of international law is enshrined in the Refugee Convention, which Israel and Jewish organizations helped draft after the Holocaust.

About 4,000 people flee Eritrea every month, according to the U.N. They flee the harshest dictatorship in Africa where all citizens must perform mandatory open-ended national service, during which men and women toil in mines, pave roads, build bridges and personally serve their commanders. The service starts during the last year of high school and ends only when the person becomes too old or sick to be useful. This GULAG-like system ensures the submission of the population and the enrichment of the junta ruling the country. Those who evade or defect from the national service face prolonged detention without trial, torture and death.

This is why the Israeli Deputy Foreign Minister at the time, MK Danny Ayalon, stated before the Knesset in 2011: “The international community regards the government in Eritrea as one that does not respect human rights, and whoever returns there is in danger, possibly danger of death.”

The Sudanese asylum-seekers in Israel are overwhelmingly non-Arabs from Darfur and the Nuba Mountains region. The Nuba Mountains, just like the Darfur region, is inhabited by African tribes who face a systematic campaign of violence and ethnic cleansing at the hands of the Arab regime in Khartoum.

One thing Netanyahu did get mostly right — Israel has very few asylum-seekers. Only a few thousand of the 48,000 Africans in Israel have filed asylum claims. But that’s only because, until 2013, Sudanese and Eritreans were barred from filing refugee status applications. Israeli authorities informed them that because they enjoy group protection, they cannot file individual claims. Since early 2014, thousands of asylum-seekers have filed claims, despite the fact that the Ministry of Interior did not announce the change in policy.

Still, many asylum-seekers choose not to apply for asylum because they do not trust Israel’s asylum system — after all, Israel has recognized only two Eritreans and zero Sudanese nationals as refugees to date. In fact, Israel has the lowest recognition rate of refugees among Western countries — only 0.15% of asylum applications are approved each year on average.

In 2013, 84.5% of Eritreans and 74.4% of Sudanese citizens who fled to other countries were recognized as refugees worldwide. Does Netanyahu really believe that all the real refugees are going to other countries while all the fake ones who are actually work migrants come to Israel?

Elizabeth Tsurkov is a Projects’ Director at the Hotline for Refugees and Migrants, an Israeli human rights NGO.