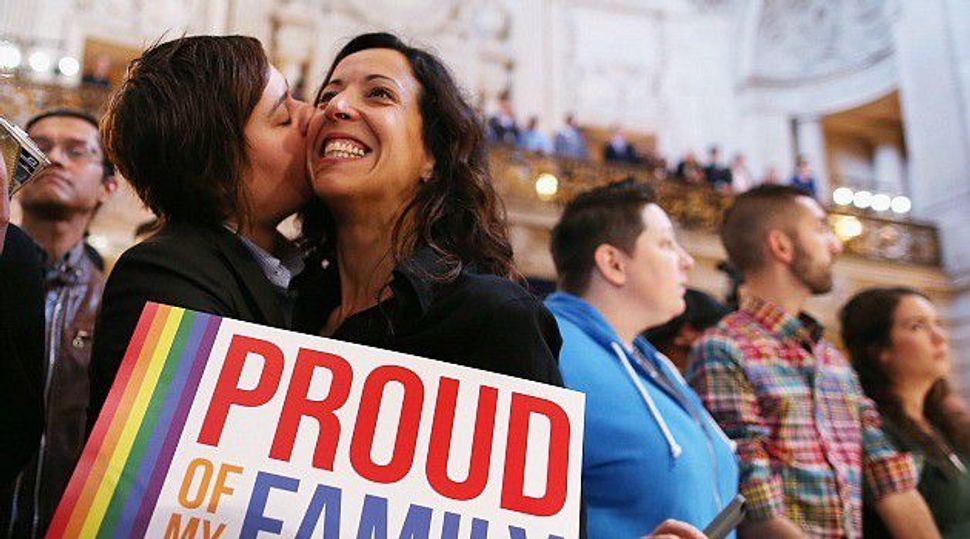 Historic Decision: Couple celebrates the Supreme Court’s decision to strike down the Defense of Marriage Act. The court also blocked California’s anti-gay marriage Proposition 8, although it stopped short of proclaiming a fundamental right to gay marriage. Image by Getty Images

The Supreme Court decision not to hear any of the seven pending cases on state same-sex marriage bans is being hailed as a watershed moment for LGBT equality. While some of these claims are overly enthusiastic — this is only a decision not to decide, and the Court will surely take up the issue at some point in the future — it does mean that gay people in 30 states will soon be able to marry the people they love.

It also means that same-sex marriage continues its astonishing run since the Windsor case was decided in June, 2013. Of 42 cases, marriage equality has won 40 times. And of course, it is also continuing to win in the court of public opinion (though a poll last month said that support may be leveling off).

Why is this happening?

Both culturally and legally, the reason should actually be familiar to many Jews. It’s because being gay, like being Jewish, is not just what one does — but who one is.

Legally, the recent spate of cases on marriage — now all left standing by the Supreme Court — derive, of course, from last year’s landmark Supreme Court case, Windsor v. U.S., which invalidated the Defense of Marriage Act. But on closer inspection, they have gone far beyond that case’s holding, written by Justice Kennedy, which was narrow, tethered to federalism, and which could easily be read as allowing states to decide the parameters of marriage for themselves. It is easy to imagine Justice Kennedy’s opinion becoming the basis for anti-gay, rather than pro-gay, decisions.

Really, the legal basis for these cases dates back eighteen years, to the case of Romer v. Evans, in which Justice Kennedy ruled — for the first time in a Supreme Court case — that gay people exist.

Romer was about a Colorado constitutional amendment which forbade cities (i.e., Denver and Boulder) from passing gay rights ordinances. Justice Kennedy wrote that this amendment could only have been based on animus against a particular group — i.e., gay people — and was unconstitutional for that reason.

To Justice Scalia, however, the amendment didn’t target gay people, but “homosexual sodomy” — a phrase he continues to use, including in Windsor. Sexual identity does not exist; only sodomy, which is an act in which anyone might engage. Laws prohibiting it, therefore, are not aimed at any particular group of people. To Justice Scalia, homosexuality is something you do, not something you are

This same difference of opinion has continued through the present day. In Justice Kennedy’s world, straight people get married and gay people get married. Marriage is one act, practiced by various kinds of people. But in Justice Scalia’s, people can get straight-married or gay-married. Those are two different acts, and it’s okay for the state to prohibit them from doing the latter.

All of the post-Windsor marriage cases have gone Justice Kennedy’s way, both in terms of how they frame the question, and in how they answer it. Marriage bans target gays and lesbians; therefore, they are unconstitutional. Recognizing sexual identity as an identity, not just as an act, practically dictates the conclusion.

Culturally, of course, we’ve seen the same evolution. Americans have come to know their LGBT friends, neighbors, and family members as gay, lesbian, bisexual, or transgender people. They are people who may (in the LGB part) or may not engage in various sexual acts, but that’s not how we see them. We see them as people, with lives, loves, and losses. And identities that should not be the basis of discrimination.

Does this sound familiar?

It should. In Jewish law and Jewish history, “Being Jewish” is something you are, not something you do. You may or may not keep the commandments, practice the religion, write checks to Federation, or see Woody Allen films. But, if you choose to embrace it, Jewishness is an identity, not an act.

Remember that Seinfeld episode (“Serenity Now,” for fans) in which Elaine’s boyfriend shouts “I renounce my Judaism”? What made that scene so hilarious was the absurdity of a Jewish man (a very Jewish man, in terms of cultural stereotypes) thinking he could escape his Jewishness by making such a pronouncement. Even television understands that Jewish identity is a noun.

To be sure, it is a noun that needs verbing to survive. But the reason anti-Semitism is wrong isn’t that waving the lulav or blowing the shofar is so special. It’s because Jewishness is not a set of acts, but a quality of personhood.

Ironically, Biblical and Talmudic texts on “homosexuality” view it the way Justice Scalia does: as an act, not an identity. (This ambiguity is one of many reasons the term “homosexuality” has been discarded.) This is why, even today, some Ultra-Orthodox rabbis continue to analogize gays to kleptomaniacs – i.e., people with a propensity toward certain forbidden actions.

But this view is wrong. One’s gender identity, sexual identity, or religious identity may be expressed in certain constitutive acts, but it is not reducible to them. We exist in our chosen and given identities, and are united as much as divided by them. Our nation is comprised of a thousand such identities, and at our best, we do not discriminate on the basis of them.

Or perhaps put more immediately: our bodies act, and can fulfill the heart’s yearning. But even without expression, the heart itself knows.