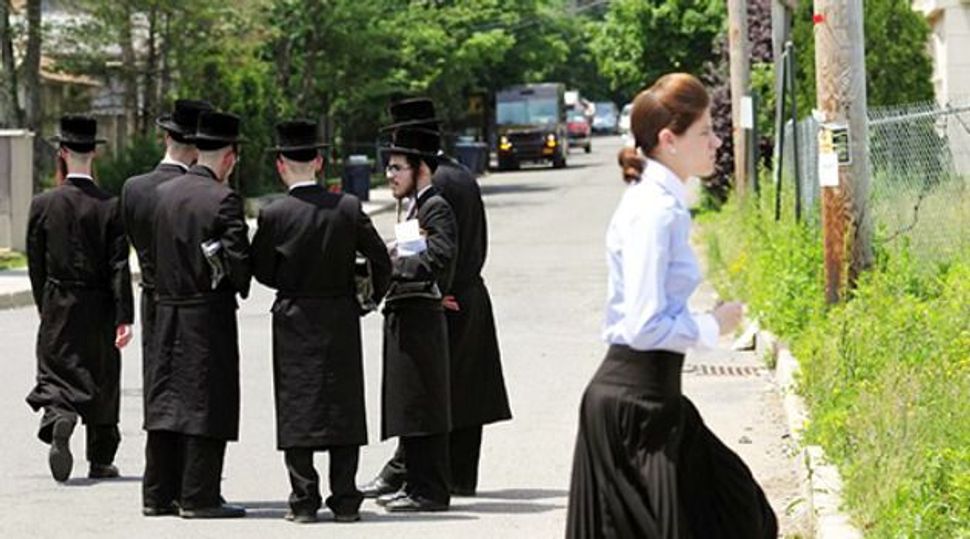 You know the Village of New Square — that holy shtetl that keeps Judaism alive and well, that isolated Mecca of Hasidism and Follow-the-Rebbe-Blindly-ism? You may have heard of the arson attack two years ago on one of its residents, Aaron Rottenberg, which was allegedly incited by village leaders, or about the rampant cover-up of alleged sexual abuse, as revealed in recent headlines.

This week, in a letter to its Orthodox Jewish neighbors, New Square leaders, under the auspices of a very eloquent non-Square lawyer (entirely my guess), announced that it intends to reinvent itself as a wilderness until the second coming of the dinosaurs. Its new name will be The New Cube (because Old Square times New Square equals, of course, New Cube).

In a heartfelt letter, which was featured in an independent Orthodox weekly newsletter delivered to Monsey residents, New Square leaders beseech their neighbors — those gentile-ish Jews of Monsey — to resist buying property within a 1-mile radius of New Square to help protect the late Skver Rebbe’s wishes: to be isolated from the impurities of common, lesser humans — that is to say, non-Hasidim, and especially non-Jews.

The letter begins with a dramatic history of New Square — how the late Rebbe, a pariah, came out in the wilderness, “invested staggering sums of money” from his followers’ pockets (entirely my guess, too) and boundless energy to build a sheltered village — a wilderness unto itself.

“If New Square ceases being the ‘isolated corner’ that the Rebbe zt”l envisioned, its entire character will be threatened. In fact, it would no longer be a secluded shtetl, but rather a Skver neighborhood spanning several streets, located within a larger surrounding Jewish community. This is a grave concern to us, especially since this blending of communities would expose our sheltered children to certain styles of business and shopping, as well as tznius standards, that may undermine the high level of purity for which we strive.”

This is apparently now in jeopardy. Exposing its children to the danger that is the Orthodox Jewish community and all its vogue dress standards, shady business styles and shopping (whatever those may be) will blur the border lines, inevitably leading to mixed dancing. Or something.

In tightening its borders and securing its isolation, The New Cube, leaders announced, will now be cordoned off with moats and drawbridges and dragons circling the air. Access to and from the village will be limited, and only those who show an Acceptable Business, Shopping and Tznius ID, which may now be obtained outside The New Cube, within the 1-mile radius, will be allowed in. Those are for goyim only, obviously. The Jewish goyim — you know, those who wear the teeny tiny saltine-size yarmulkes, do shady business and shopping, and pose a direct threat to the sheltered children who may soon realize there is a hip, non-wilderness way of being Jewish — will not be allowed in.

Those who defy the community’s wishes and purchase property outside The New Cube will have to face the threats and intimidation of community leaders. Shall they choose to stay put, the threat of arson via one of the rebbe’s many butlers will be imminent. Leaders won’t confirm or deny this, but a statement of strong condemnation has already been drafted.

The New Cube will feature a convalescence home for new mothers and a high-tech health center, both of which will be accessible to those Jewish goyim. Additionally, the community plans to add a Center for Arson and Sex Abuse Cover-up.

Leaders of this innovative and holy project declined to comment for this article.

Editor’s Note: Frimet Goldberger’s article is a satire, but the letter from which she quotes is real.