Why We Censor ‘Klinghoffer’ at Our Peril 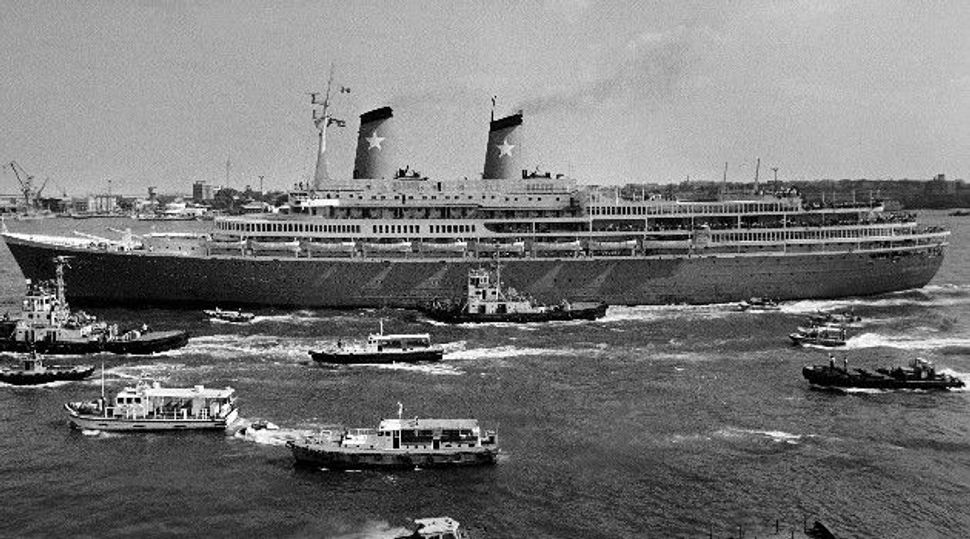 (Haaretz) — As the Metropolitan Opera prepares to launch its production of “The Death of Klinghoffer,” John Adams and Alice Goodman’s 1991 operatic account of the 1985 hijacking of the Achille Lauro cruise ship and the murder of a Jewish, wheelchair-bound passenger by Palestinian militants, the media has been abuzz. Protestors have gathered outside Lincoln Center demanding that the Met cancel the show, and agitating by the likes of the ADL has succeeded in blocking the planned global simulcast.

Opposing the opera, Judea Pearl, father of slain journalist Daniel Pearl, has written that “civilized society, from the time of our caveman ancestors, has learned to protect itself by codifying right from wrong, separating the holy from the profane, distinguishing that which deserves the sound of orchestras from that which deserves our unconditional revulsion. The Met has smeared this distinction and thus betrayed their contract with society.”

But the show will go on, opening on October 20.

There are at least two major questions I think we need to ask about the opera itself. First, is “Klinghoffer’ morally problematic? Second, especially in light of Yom Kippur having has just passed, what is the role, if any, of apology and forgiveness when it comes to political misdeeds and inter-group reconciliation?

Scholars continue to debate the effectiveness of apology as a tool in conflict resolution scenarios. It may be enough to note here that 11 years after the incident, one of the operatives behind the hijacking and murder issued an apology, something which, six years after that, he seemed less certain about.

But what if the opera were to serve the role as a sort of telling, a magid, a spare-nothing account of the depths of the violence which humans enact upon others? What if, in that capacity, it were to serve as a public acknowledgment of the severe pain the Klinghoffers — and by extension, other victims of terrorism and those who have feared its reach — experienced?

The protestors certainly don’t see it this way. Perhaps because of the depiction of the hijackers as characters, those who have been most vocal in opposing the work have suggested that the opera seeks to justify their actions.

From the beginning of the libretto, we know terrible things will befall the ship’s passengers and crew. It’s a method Hitchcock made famous in his distinction between suspense and surprise. And as in so many works of artistic tragedy and actual history, cruelty drives the plot. Does this make the opera itself, of necessity, cruel? Of course not.

The hijackers sing of exile, of lost Palestinian villages. To them, their violence is justified. But hearing the personal justifications of the perpetrators does not mean that the audience must agree with them, nor that the libretto’s authors necessarily do.

While one hijacker sings of wanting to enter Paradise “within two days,” he admits that his “soul is all violence.” Another spews vicious anti-Semitic tropes. Through those sections, it is hard to muster much sympathy for the militants.

The Klinghoffers, for their part, are tragic figures with little objectionable about them. Him, shot, with his body callously tossed overboard. Her, hidden from the ugly truth until the end.

But it is Leon Klinghoffer’s speech which is crucial for seeing that the opera is not an erasure of good versus evil, as Judea Pearl claims. Instead, it unsparingly outlines the crucial fulcrum on which the entire Israeli-Palestinian conflict rests. Sings Klinghoffer:

“I know how children in the Promised Land learn to sleep underground because of your shelling. Old men at the Wailing Wall get a knife in the back. You laugh. You pour gasoline over women passengers on the bus to Tel Aviv and burn them alive. You don’t give a shit, excuse me, about your grandfather’s hut, his sheep and his goat, and the land he wore out. You just want to see people die.”

As we know all too well when it comes to Israel-Palestine, each side sees itself as either avenging wrongs committed by the other, or defending themselves from the other’s violent spirit. The Klinghoffer opera, whatever its artistic merits or flaws, perfectly captures this dynamic.

One last note. The desire to distance oneself from understanding lest one accidentally sympathize and hence justify is understandable from a visceral perspective. But to assume that to understand is to justify is a grave intellectual error, one which our society makes at its peril. We can condemn acts of cruelty — as we should — all we want. But to understand, to depict, to draw historical connections, even to give grievances an airing, is not the same as justifying those deeds which may or may not have sprung from them. And most importantly, to solve any problem, one must first comprehend it.

Why We Censor ‘Klinghoffer’ at Our Peril