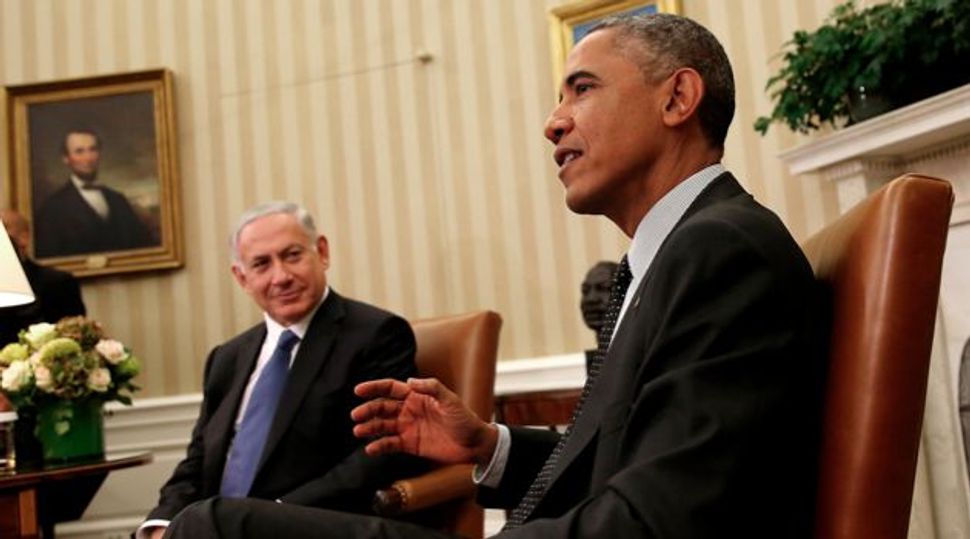 Benjamin Netanyahu has drawn a goodly measure of criticism for his latest verbal tussle with the White House, culminating in his charge that the Obama administration violated “American values.”

Frankly, most of the criticism is undeserved. There’s a lot to be said about the exchange and the bilateral tensions it reflects, but the prime minister’s finger-wagging about “American values” isn’t the problem. Not, at least, the way the critics make it out to be.

In case you missed it, Netanyahu and President Obama were blindsided hours before their October 1 Oval Office meeting by an announcement of new construction in East Jerusalem. Final approval had been given for 2,610 housing units at Givat Matos, across the old pre-1967 border on the road to Bethlehem. These announcements crop up regularly at delicate moments in U.S.-Israel relations. It’s almost a ritual.

It didn’t mar the leaders’ two-hour chat, which was described afterwards in cordial terms. An hour after Bibi departed, however, the administration unleashed not one but two angry attacks on the construction plan. The first came from White House spokesman Josh Earnest, who told reporters the move was “contrary to Israel’s stated goal of negotiating a permanent status agreement with the Palestinians.”

Next was a blast from State Department spokeswoman Jen Psaki. She said the construction would “distance Israel from even its closest friends,” which sounds rather like a threat. She said it would “poison the atmosphere not only with the Palestinians but also with the very Arab governments with which Prime Minister Netanyahu said he wanted to build relations. It also would call into question Israel’s ultimate commitment to a peaceful negotiated settlement with the Palestinians.” That’s harsh.

The prime minister responded as he’s always responded to these incidents: by asserting that East Jerusalem, captured in 1967, is an integral part of Israel’s unified capital. Accordingly, Israeli neighborhoods built there aren’t “settlements.”

“These are neighborhoods of Jerusalem,” he told NBC News. “We have Arab neighborhoods and we have Jewish neighborhoods.” Before criticizing, he snapped, the administration “should be acquainted with the facts first.”

The next day he took a softer tack. Sitting for a taped interview with CBS News, for broadcast the following Sunday on “Face the Nation,” he called the administration’s criticism “baffling.”

“It’s against the American values,” he said. “And it doesn’t bode well for peace. The idea that we’d have this ethnic purification as a condition for peace, I think it’s anti-peace.”

The White House chose to misunderstand the “American values” comment as an echo of the Republican right’s attacks on Obama as an alien interloper, not a real American. Officially, spokesman Earnest countered the next day with a heartfelt litany of ways U.S. support for Israel embodies American values. Journalists, briefed unofficially, accused Netanyahu of labeling Obama “un-American.”

In reality, the comment was something completely different. It was a line straight from the playbook of the settler movement’s secular-literate wing: Barring Jews from living somewhere because of their religion is a civil rights violation, no different from American neighborhoods barring blacks. A variant often heard is that Palestinians, in opposing Israeli West Bank settlements, aim to make Palestine “Judenrein.”

This wasn’t Bibi being a faux-Republican Obama-basher, a role he’s been known to play now and then. This was Bibi trying to sound liberal, to ingratiate himself with the president by invoking values Obama cherishes. Elsewhere in the interview the Israeli leader described his relationship with the president almost affectionately as “like an old married couple.”

No, the flaw in the prime minister’s comment wasn’t that it contained some subliminal racist message. The flaw was that it stretched the meaning of civil rights beyond recognition. It presumed a legitimacy to Israeli rule in East Jerusalem that no other country in the world concedes. It showed how profoundly Netanyahu — and Israelis in general — underestimate the depth of international rejection of Israel’s claims to the holy city’s eastern sector. And it showed how seriously Netanyahu misjudges international impatience with Israel’s continuing settlement policies.

Israel passed laws in 1967 and 1980 unifying Jerusalem as the undivided capital of Israel. In the 47 years since, despite nonstop Israeli insistence, not one nation has recognized the Israeli claim.

Israelis often presume that international rejection of Israel’s claims in East Jerusalem reflects doubts about Israel’s legitimacy as a sovereign nation. Not so. In the same half-century that impatience with settlements has grown, acceptance of Israel’s sovereignty within the pre-1967 lines has skyrocketed. Of 192 United Nations member-states, 157 maintain full diplomatic relations with Israel, up from fewer than 100 in 1967. Of the 35 holdouts, about half recognize Israel but withhold formal ties for various reasons.

But precisely because the rest of the world unanimously rejects Israel’s territorial claims in East Jerusalem and the West Bank, Israeli arguments about civil rights for Jewish homebuyers fall flat. Consider Netanyahu’s “American values.” Black Americans today have a right to live anywhere that any other American may live. But that doesn’t include a right to build themselves a community in Mexico on Washington’s say-so. Mexican land isn’t Washington’s to dispose of, nor do American citizens enjoy civil rights there.

Most Israelis and their closest allies around the world dismiss such arguments on grounds that the West Bank isn’t a foreign country but disputed land. Israel is as entitled as anyone to claim a piece. Unfortunately, no other country in the world buys that. Not one. That doesn’t make the argument illegitimate.

But after 47 years, it’s time to stop being surprised at the pushback. Israel’s defiance of what every other country considers settled international law, leaving 3 million Palestinians in stateless limbo, has a corrosive effect on attitudes toward Israel. Israelis call it delegitimization. They try to silence the critics. That just makes things worse.

It’s worth noting that when Bibi and his allies invoke American values of civil rights for Jews, they don’t entirely mean it. Saying Jews have a right to live anywhere in the Land of Israel doesn’t necessarily imply that non-Jews do too. There are various differences. Most important, fully 13% of Israel’s territory, 1,050 square miles in all, is off-limits to non-Jews because it’s owned by the Jewish National Fund, whose by-laws forbid leasing land to non-Jews. Ironically, that’s 13% of the sovereign territory of the State of Israel, which is defined in Israeli law as — wait for it! — the territory bounded by the old pre-1967 border. Yup — the border Israeli spokesmen insist isn’t there.