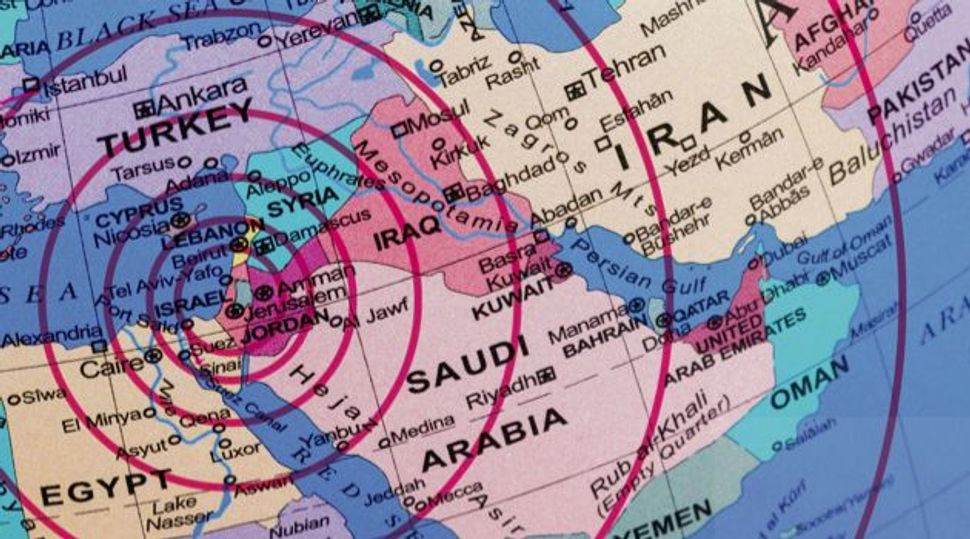 Thinking Beyond: Israel is expanding its sights. Image by Thinkstock/Kurt Hoffman

In his recent United Nations General Assembly speech, Israeli Prime Minister Benjamin Netanyahu spoke glowingly about the possibility of strategic cooperation “for the first time” among Israel and Egypt, Jordan, Saudi Arabia and the United Arab Emirates in the fight against militant Islam. “A broader rapprochement between Israel and the Arab world may help facilitate Israeli-Palestinian peace,” he stated. “Together we must recognize the dangers of radical Islam.”

Is this a realistic idea? Probably not in the sense Netanyahu apparently intends, which is to postpone a two-state solution with the Palestinians in favor of a regional struggle against both Iran and ISIS — against both militant Shiite and Sunni Islam. True, Middle East peace partners Jordan and Egypt have lately tightened strategic cooperation with Israel precisely because of radical Islam. And none of the four Arab countries Netanyahu mentioned objected publicly to his statement; obviously, it nicely serves their own deterrence needs vis-à-vis radical Islam. But they all constantly demand an Israeli-Palestinian peace deal as a quid pro quo for any overt upgrading of relations.

Few, if any, Israelis would object to closer ties to Saudi Arabia and the UAE, whether overt or clandestine. But the dominant Israeli right-wing and settler lobby are certainly not prepared to pay a “Palestinian” price. If indeed they believe such an alliance can be created, there are two important and sobering precedents from which they should learn: the “periphery doctrine” of the 1950s, ’60s and ’70s, and the Madrid process of 1991–96.

The periphery doctrine emerged in the mid-1950s when a wall of hostile Arab nationalism led by Egypt’s Gamal Abdul Nasser surrounded Israel. To break the isolation and the strategic siege, Israel under David Ben-Gurion sought to leapfrog over the Arabs and make common cause with a Middle East “periphery” of non-Arabs and non-Muslims that shared its concern regarding Arab intentions. Thus an alliance, codenamed ‘Trident,” was formed with Iran and Turkey, and another with Ethiopia, along with parallel clandestine relationships with Morocco, the Iraqi Kurds and the southern Sudanese — the latter two were ethnic minorities that sought to emulate Israel’s independence.

The periphery alliances helped Israel deter the Arab states and allowed it to leverage a strategic relationship with the United States. Israelis aware of the alliances waxed emotional about the re-establishment of ancient biblical ties with Persia and Sheba that preceded the Arabs by 1,000 years. Yet Israel’s periphery “allies” were never really allies. They never established full diplomatic relations, preferring a secret security relationship with Israel. And when, in 1967 and 1973, Israel found itself locked in existential struggles against hostile Arab coalitions, the Turks and Iranians, Kurds and Moroccans essentially turned their backs.

The periphery doctrine waned in the late 1970s, once Israel and Egypt made peace — a far more significant strategic step and a longer-lasting endeavor than was the short-lived Trident. But another opportunity for close regional strategic cooperation presented itself in late 1991, this time with the Arabs. After galvanizing a European and Arab coalition to push Iraq’s Saddam Hussein out of Kuwait, the George H. W. Bush administration and its dynamic secretary of state, James Baker, applied heavy pressure on a reluctant Israeli leader, Yitzhak Shamir, to attend a conference in Madrid and launch a regional multilateral peace process. Netanyahu, Shamir’s deputy foreign minister, was there.

The outcome was a set of bilateral Israel-Arab negotiation processes and a set of five multilateral working groups dealing with issues like water and regional arms control and attended by Israel and 14 Arab countries. Only after Shamir and Netanyahu left office and Yitzhak Rabin took over and ushered in the Oslo process with the Palestine Liberation Organization did states like Oman, Qatar, Morocco and Tunisia establish low-level diplomatic relations, and Israel and Jordan sign a peace treaty. Foreign Minister Shimon Peres wrote a book called “The New Middle East” and predicted that Israel would join the Arab League. The Madrid process blossomed.

But not for long. By 1996 the multilaterals were dead; within a few years, the Omanis and others left Tel Aviv and expelled Israel’s diplomats. Disappointment over the lack of progress in the Oslo process was a key factor. Fundamental differences over issues like open commerce were another, not to mention the very nature of Israel-Arab relations.

What can we learn from these two attempts to integrate Israel with other states in the region? The obvious obstacle that any effort led by Netanyahu will have to overcome is the Palestinian issue. If Netanyahu thinks the Arabs are prepared to forget about it, he’s wrong. A second key problem is Muslim attitudes toward Israel as a Jewish state. If this made things complicated for the Shah of Iran in his day, how much more so for the Saudis and even the Egyptians today.

Making common cause with the moderate Sunni Arab states against ISIS and Iran can be a good idea if the other side is truly willing. If, as in the past, this effort helps Israel to leverage closer ties with the United States and other countries, all the better. But only as long as Israel takes into account its partners’ political limitations regarding the Palestinian issue, understands its partners’ religious and ideological limitations concerning the nature of the Jewish state and factors in American reservations.

Riyadh will never collaborate directly with the Israeli military against fellow Sunni Muslims, even of the ISIS variety. And Washington will not agree that Israeli-Sunni Arab dealings be directed against Iran.

The Middle East is today unstable and crisis ridden. As in 1991, that’s potentially a positive backdrop for Israel-Arab cooperation. Yet any sense of stability gained through a “my enemy’s enemy is my friend” approach is almost certain to prove transient at best.

Yossi Alpher, a former Mossad official and former director of the Jaffee Center for Strategic Studies, is the author of “Periphery: Israel’s Search for Middle East Allies” forthcoming in February 2015 from Rowman & Littlefield.