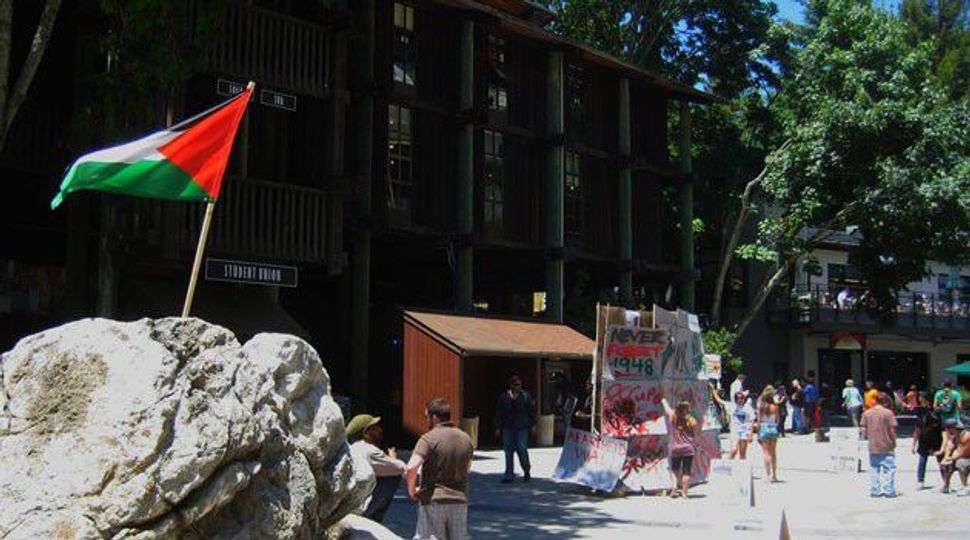 Hostile Territory?: What responsibility does a university administration have to avoid anti-Israel intimidation? Image by Milesgehem/via Flickr

As a long time professor at UCLA and a first hand witness to the politicization of CNES, I was keenly interested in this reaction of Jewish studies professors to the AMCHA report.

I was disappointed that they chose to postpone a substantive discussion of AMCHA’s findings and focused instead on attacking the motivation for conducting the study in the first place and the character of AMCHA’s organizers. They were also perturbed by AMCHA’s decision to circulate a list of Middle East studies professors that the organization considers anti-Israel.

It was disappointing, because the letter could have been more credible had it been supported by a counter study showing AMCHA’s findings to be invalid or, at least, less alarming than reported. No such study was cited.

Alternatively, the 40 professors could have reported to the Forward’s readers about their own efforts to curb anti-Israel propaganda on their campuses, the methods they applied, and how successful those efforts were. I wish they had.

The professors’ letter focuses instead on AMCHA’s technique of monitoring lectures, symposia and conferences, saying that this “strains the basic principle of academic freedom.” I take issue with this statement. Such studies based on first-hand witnesses are extremely valuable, and are often used by universities to gauge the impact of their programs.

Last year, when I presented the UCLA chancellor, Gene Block, with my personal observations of how Israel was being demonized in CNES programs, he asked whether I have “supporting documentation” of such activity over an extended period of time.

I wish I could have handed him the results of a study like the one AMCHA organized, which, theoretically, should have been conducted by the university itself. It wasn’t. Nor was it conducted by the Center for Jewish Studies, though the issues involved threaten to change Jewish life on campus. AMCHA went to the trouble of producing such documentation, and sure enough, 40 professors rose up to scold the organization for documenting open public symposia, instead of paying attention to the anti-Zionist rhetoric used in those symposia.

Another interesting thing I learned from the UCLA chancellor was that, with the exception of a few professors like me, leaders of the Jewish community on campus have not complained about the CNES program.

Indeed, I do not recall the Center for Jewish Studies at UCLA discussing whether it is appropriate for an academic unit that calls itself “Center for Near East Studies” to take an entire country, a home to about 50% of the Jewish people, and to claim it as illegitimate, obsessively denying Jews the right to a homeland in the Middle East. The co-directors of CNES, Gabriel Piterberg and Sondra Hale, are active promoters of the Boycott, Divestment and Sanctions movement, and have signed several petitions to boycott Israeli academics (including me).

I do not recall the Center for Jewish Studies conducting sit-ins or teach-ins or writing protest letters when two notorious Israel demonizers were chosen to co-direct the CNES, replacing Susan Slyomovics, who started CNES on its persistent anti-Israel campaign.

This silence by Jewish studies professors may have been a major contributor to the wait-and-see attitude of the UCLA administration towards the drastic deterioration of campus climate, with CNES consistently providing BDS speakers and activists academic cover and legitimacy.

The professors’ letter expresses grave concern over “stifling of debate” and over “the importance to provide opportunities to students to consider the world around them from a wide range of perspectives.” This concern is real and should be guarded vigilantly. However, I have seen how CNES stifles debate in its programs. And when pointing this out I have been told that the Israel Studies Center would be a better home for “alternative views.” But let us recall, the Higher Education Act, Title VI, obligates each academic center to present diverse perspectives; it is not enough that the university as a whole offers such opportunities.

Once we agree on the importance of open debate, we should also agree that the anti-Israel character of programs like CNES should be a subject of discussion. I believe there is now substantial evidence for characterizing the BDS movement as racist, one that uses genetic lineage and other immutable characteristics to deny Jews that which is granted to other collectives. So the appropriateness of BDS activists to serve as directors of academic centers at UCLA and other colleges and universities should be broached. I fail to see why my esteemed colleagues consider these topics taboo, bordering, heaven forbid, on “witch hunting” or “black listing.”

There remains therefore one unanswered question: If the BDS movement is indeed racist, what do we call its leaders and how should we guide students who are confronted with them on campus?

Judea Pearl is the Chancellor Professor of Computer Science at UCLA and president of the Daniel Pearl Foundation.