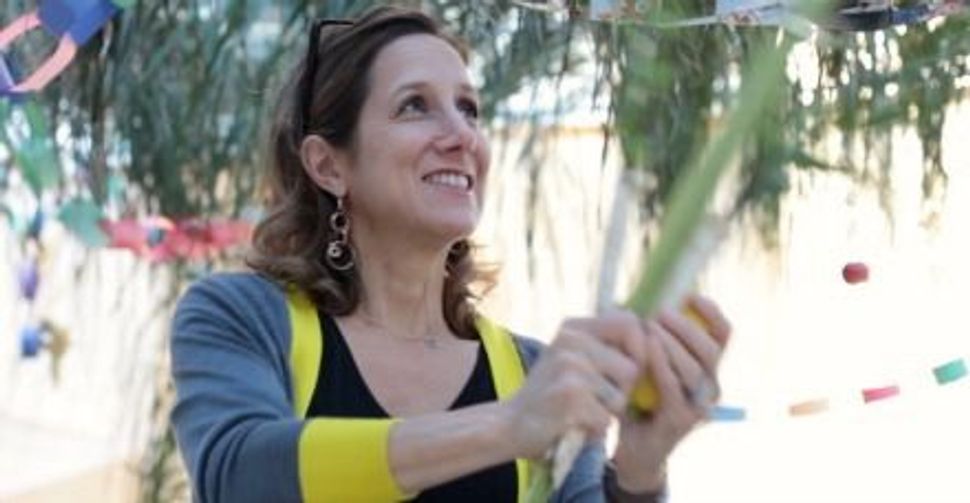 “Sukkot is about shtupping.”

“Shtupping” (Yiddish for sex) is not what most associate with the harvest holiday.

I thought Sukkot (literally “booths”) — meant decorating tents that evoke the shelters built by the newly-freed Israelites as they wandered in the desert.

But then I hadn’t really focused on the erectness of the lulav (the green bundle containing a palm frond, two willow branches, and three myrtle branches) or the rotund juiciness of the etrog (the lemon-like citron fruit). 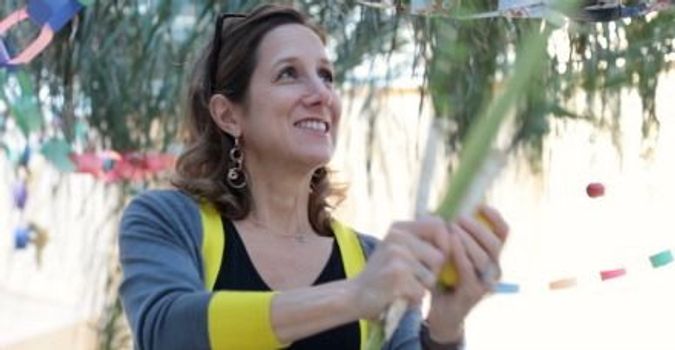 “Are you just being provocative?” I ask him.

Paley waves me off. “No! I’m in the text.” Which is rabbi-speak for ‘The Torah and Talmud back me up.”

“First of all,” he continues, “you take a particularly suggestive fruit. Right? And you take a very long and tightly-bound spear — the longer the better, to tell you the truth, with leaves at the base, just in case you miss the point — and you thrust in all different directions,” he demonstrates the gesture, “thrusting, thrusting and more thrusting. And then you march around like you’re getting married with it, and then you do a little more thrusting. The sukkah is supposed to be like a huppah, the wedding canopy.”

The marriage metaphor resurfaces a week later during a series of conversations in Los Angeles, where I traveled to experience Sukkot on the other coast.

“The huppah and a sukkah are really parallels,” says Rabbi Naomi Levy, who leads a spiritual community without a building, called Nashuva. “A huppah, like a sukkah, also has to be this temporary structure, very fragile.”

Levy’s backyard is an advertisement for mindful, earth-conscious living, with an impressive vegetable garden and a miniature animal farm that includes egg-laying chickens and two goats — one named “Goldie Horn,” which I find hilarious.

Levy says her husband, Rob Eshman, editor of LA’s Jewish Journal, is really the farmer of the family, and she offers me a stem of his fragrant verbena. “Smell this.”

I find myself violating the Tenth Commandment as I covet California.

Maybe it’s the early morning light or the soft air, but Levy’s modest acre suddenly seems utopian. Her sukkah, erected with metal poles and diaphanous curtains, appears not like a jerry-rigged prop, but a perfect sanctuary. Though not yet decorated, it’s ethereal just as it is, with gourds on a white tablecloth and translucent walls that lift with the breeze.

“On Pesach, we and God got betrothed. Shavuot, the giving of the Ten Commandments, that was our ketubah: marriage contract. What is Sukkot? It’s our huppah. Sukkot is the wedding. What do I always say to couples under the huppah? I say, ‘This is the metaphor for your lives. That structure over there — that building that’s my house — is offering me just the illusion of shelter. Because we all know that structures fall down and they offer only illusions of shelter.’”

She forces me to confront my building-dependence, with all its material comforts. I do love nature, but partly because I know, at the end of a day outdoors, that I can go home to a Nespresso machine and a hot shower.

Rabbi Sharon Brous, who founded IKAR, a spiritual group that requires community service, also invites me into her flower-bedecked home sukkah, serving me a platter of fruit. “This is one of the holidays that reminds us of our connection to and responsibility for the earth,” she says as I chomp on the grapes. “As contemporary Jews, I think many of us are so disconnected; We’re urbanites.”

You got that right.

“We don’t plant or harvest our own food.”

“And so this is one of those moments where the smells of the outdoors are with us throughout all of our meals.”

It hits me like a ton of grapes: I was sukkah-deprived. This may require some serious Jewish therapy because I can’t get those sukkahless autumns back.

I mourn not just my own childhood but those of my children. Just think of the sweet sukkah memories I could have created when they were small! How they’d have relished a family construction project each fall, eating every meal outside — a permanent picnic. How delighted would they have been to roll out sleeping bags under the stars?

Not to mention: the flimsy four walls might have sparked a worthwhile conversation about the true value of “stuff” and what really lasts.

“We go outside into this very simple structure,” says Brous, a mother of three, and we say, “Here’s what matters: Sitting at a table with someone you love and sharing a meal and knowing that at the end of the day, it’s love that will persevere and persist.”

“Once a year, they kick us out of our house,” says Rabbi Ed Feinstein, who is as jovial as he is blunt. Feinstein is known not only for his fervid sermons at Encino’s Valley Beth Shalom, but his candor about the Conservative movement’s failings — which is an article for another day.

“On Yom Kippur, you fast all day long and deny all the cravings of the body and you sit in a synagogue for 25 hours for God’s sakes, which is the least body existence that there is.”

“You come out to the sukkah and you feel what it’s like to be living in a body in the world. And then, of course, the ideology of the holiday is a paradox: because as a body in the world, you’re vulnerable. Because a body is made up of stuff, and all stuff breaks. Because a body is vulnerable to heat and to cold and to disease and to accident. To feel the vulnerability of the body is why you live in a sukkah with no roof. To remind yourself that you’re a vulnerable person.”

Later, inside a more elaborate sukkah at Sinai Temple, the large Conservative shul in Beverly Hills, Feinstein’s good friend, Rabbi David Wolpe, underscores the lessons of temporariness. “It’s only when you actually see and feel the fragility of the sukkah, that it brings home to you the impermanence of life,” he tells me. “Everything about life that gives it poignancy and purpose is based on the knowledge that it will end…Sukkot teaches you about the journey of life that you are supposed to go through.”

Though the word “journey” can be overused, it starts to feel crucial when Wolpe and his colleagues stress that the Torah is a “road story” and Sukkot the powerful coda in a trilogy that starts with Passover (escaping Egypt) and is followed by Shavuot (Sinai) before concluding with Sukkot (the desert).

Where Passover marks our liberation, and Shavuot (the giving of the Torah) signifies our contract, Sukkot represents our physical hazing as we braved the elements, unsure of our fate en route to the Promised Land.

I’ll go out on a limb and venture that most American Jews don’t see how these three so-called “pilgrimage holidays” connect. I certainly didn’t. But now that the interdependence of these holidays has been brought home to me, I can’t really imagine sidelining Sukkot ever again.

When Jews skip Sukkot, we’re shortchanging the 40 years we were tested; when all we had was manna, water, and shaky faith; when we had to decide whether to stay the course, turn back, or give up.

Wolpe also emphasizes that Sukkot is about the trip, not the arrival. “If you look at the three holidays – the Shalosh Regalim – this is what you learn: Sukkot is all about the journey. It teaches you that, essentially, that’s what life is.…The journey itself is what matters – the way you conduct it and the people with whom you conduct it.”

Without getting all Oprah about this, that idea resonates for me: the wandering itself is worth it. We often avoid challenging paths because we’re unsure what lies at the end of them. But then we miss what Walter Benjamin called “the art of straying.”

“Never to get lost is not to live,” writes Rebecca Solnit who was quoted last summer on the website, Brainpickings.org, which curates provocative writing every Sunday. “Leave the door open for the unknown, the door into the dark. That’s where the most important things come from, where you yourself came from, and where you will go…”

I’m not exactly great without a map. I’m reassured by predictable, attainable goals. So, I’ve taken Sukkot’s message as a personal charge. To learn how to get lost this year during my extended holiday-hike. To “leave the door open,” as Solnit puts it. “Looking forward, you constantly acquire moments of arrival, moments of realization, moments of discovery. The wind blows your hair back and you are greeted by what you have never seen before.”