Why Columbus Day Should Be A Jewish Holiday 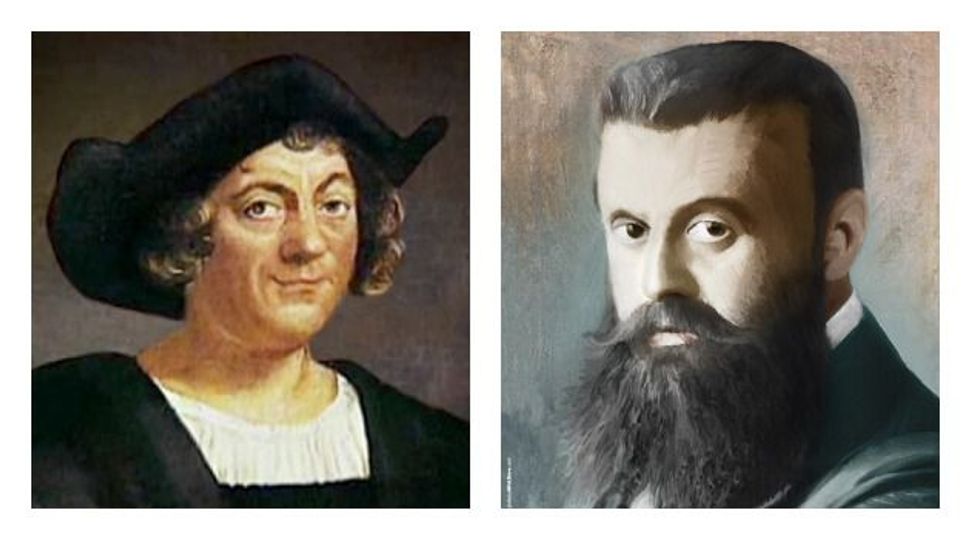 At this point, the American education system has modified textbooks to indicate that no, in fact, Christopher Columbus didn’t discover America. In fact, as Slate points out, the Italian explorer who set sail to bring wealth and glory to the Spanish monarchy was actually a colonizer whose arrival on the American continent brought misery and death to millions of Native Americans through slavery, disease and warfare.

So why do we still celebrate Columbus Day?

For Jews, at least, there may be a little-known reason to keep on marking this day: Columbus was Jewish. Not only that, but he was basically the Theodor Herzl of the 15th century.

Charles Garcia outlined all of this in an article for CNN back in 2012:

Over the course of the last decade, Spanish academics and historians (including Jose Eruogo, Celso Garcia de la Riega, Otero Sanchez and Nicholas Dias Perez) have concluded that Columbus was a Marrano, a crypto-Jew, whose survival depended on keeping his Jewish identity sealed and hidden in the face of anti-Semitic ethnic cleansing.

Known as Cristóbal Colón in Spain, Columbus didn’t even speak Italian. His last will and testament, written in Spanish, made some rather unique provisions, which have tipped off historians about his religious background.

On the date of his death, May 19, 1506, his Jewish roots started poking out. Two of his last wishes — tithing one tenth of his income to poor people and providing an anonymous dowry for poor girls — are part of Jewish tradition. He also explicitly decreed giving money to a poor Jewish man living in the Jewish Quarter of Lisbon, Portugal.

In his will there is a subtle yet noticeable symbol — a triangular signature of dots and letters — that is distinctly similar to a symbol found on Jewish tombstones in Spanish cemeteries. He requested that his heirs always use this symbol as well.

October 12, 1492, “Columbus sailed the ocean blue,” Winifred Sackville Stoner, Jr.’s famous poem reads. But another significant event happened that day, further alluding to Columbus’ Jewish heritage. October 12, 1492 was the same day that King Ferdinand and Queen Isabella issued a decree giving Jews the choice of being forced to convert to Christianity, leaving Spain, or, if they remained in Spain as Jews, being subject to torture and murder by decree of the crown.

Simon Weisenthal argues in his book “Sails of Hope” that the date of Columbus’ voyage was no accident. The date was, in fact, chosen in the hopes of finding Jews a safe haven from the crown. What’s more, recently discovered evidence indicates that the Spanish monarchy’s deep pockets did not fund Columbus’ expedition — instead, two Jewish conversos did. Garcia reported for CNN that “Louis de Santangel and Gabriel Sanchez advanced an interest-free loan of 17,000 ducats from their own pockets to help pay for the voyage, as did Don Isaac Abrabanel, rabbi and Jewish statesman.”

So, even though Americans are over Columbus Day — he didn’t really discover America, and his expedition brought nothing but misfortune and suffering to the indigenous Americans — Jews shouldn’t be. After all, if you reframe Columbus to see him not as a brutal colonialist, but as a visionary looking for a safe home for the Jewish people, he’s not all that ideologically different from Herzl and Israel’s founding fathers, is he?

Why Columbus Day Should Be A Jewish Holiday