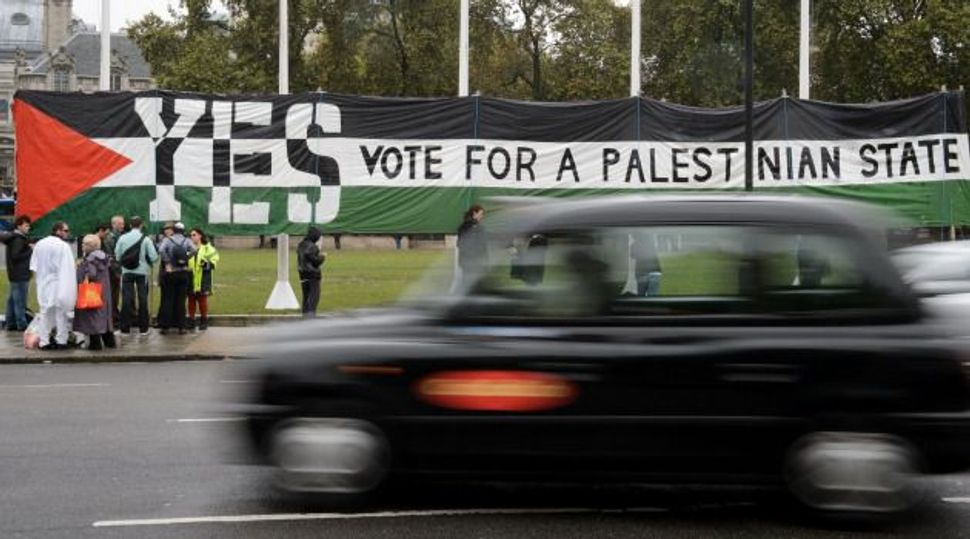 Demonstrators call on the British parliament to recognize ‘Palestine’

The British Parliament’s decision to back a motion to “recognize the state of Palestine,” by a margin of 274 to 12 votes, means nothing — and everything.

Nothing, because the passage of this motion was a purely symbolic matter, close to but not really a true indication of parliamentary feeling on the matter, since not all MPs were allowed a free vote and fewer than half of them even bothered: 90% of Conservative MPs didn’t show up. At worst, the whole thing can be viewed as a stunt, promoted by a cadre of anti-Israel MPs on the backbenches, seized upon by Labour leader Ed Miliband to undermine the authority of the government and score political points, less than a year out from the general election.

The fact of the matter is that, even prior to the vote, the government was clear that its position on Palestinian statehood would not alter. While critical of settlement policy and human rights violations, the Conservative Party is the most pro-Israel party of the three main parties in Britain. The Conservative Friends of Israel continues to have a great deal of influence within the parliamentary party itself. One vote will not overturn that dynamic, nor will it make a state for the Palestinian people any more of a reality. Only the Israelis and Palestinians together, not the British, can make that happen.

So, no need for Israel to drag the British ambassador in for a lecture, as recently happened to Sweden’s envoy. But that doesn’t mean that Jerusalem should ignore events in Parliament entirely. While the vote might mean nothing today, it means everything insofar as it shows something is shifting in Britain and Europe more broadly, where the increasing criticism of Israel heard on the street is being reflected at a higher political level.

Netanyahu’s government need only look at Britain’s Labour Party for evidence. When in government, Labour maintained a steadfast support for and good relations with Israel, the Second Lebanon War notwithstanding. Neither Tony Blair nor Gordon Brown would have instituted, as Miliband and Shadow Foreign Secretary Douglas Alexander did yesterday, a three-line whip to vote in favor of the recognition of Palestinian statehood (although around a quarter of Labour MPs chose to abstain).

Perhaps Netanyahu should note this. Perhaps he should observe that Sir Nicholas Soames, Conservative MP and grandson of his most beloved Winston Churchill, was one of those to vote for the motion. Perhaps he should listen to Sir Richard Ottaway, a Friend of Israel who said in the debate that Israel’s recent acquisition of land in Gush Etzion “outraged me more than anything else in my political life.” Perhaps he should sit down with Britain’s ambassador to Israel, Matthew Gould, who will tell him that “this Parliamentary vote is a sign of the way the wind is blowing, and will continue to blow without any progress towards peace.”

In the struggle for public opinion, since the beginning of Netanyahu’s second go-around in 2009, Israel has slowly lost Europe. While the strategic relationship remains in place — militarily, diplomatically, scientifically — over time fewer and fewer Europeans are willing to abide the Israeli side of the argument, even when it is valid, as they are confronted with the present dynamic between Israelis and Palestinians. The longer the occupation is sustained, no matter whose fault it is that the peace process is stagnating, in Europe, Israel will be the one that continues to lose face.

What should trouble Jerusalem is not what this vote will do to European policy today, but what it might mean tomorrow. Israel should be concerned that motions, debates and votes of this kind represent the beginning of something in Europe, not the sum of it. Sweden looks set to recognize Palestine; the British parliament has at least debated the issue. The only question for Israel is: Who will be next?