Bibi Tries and Fails To Bypass the Palestinians 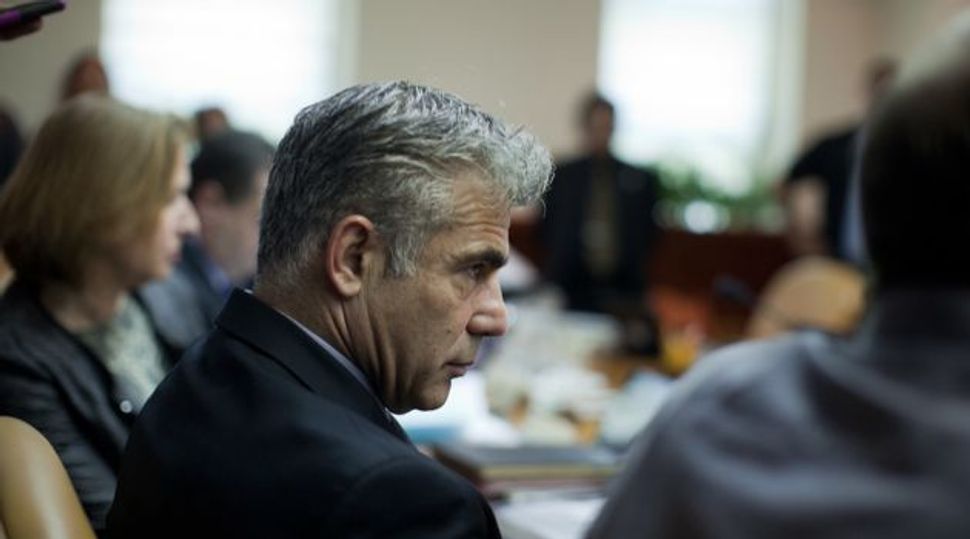 Obstruction: Finance Minister Yair Lapid might pull out of the governing coalition. Image by Getty Images

Israeli Prime Minister Benjamin Netanyahu’s big idea for a regional partnership with moderate Arab states to confront violent extremism — while leaving the Palestinian conflict on the back burner — got doused with a big bucket of cold water in mid-October.

Make that two buckets. One was from his most important ally in the Arab world, Egyptian President Abdel Fatah al-Sissi. The other was from his largest coalition partner, the centrist Yesh Atid party.

Sissi welcomed delegates to an October 12 international conference in Cairo on rebuilding Gaza — to which Israel was pointedly not invited — with a speech that was directed as much to the Israeli public as to the delegates. His message: You can’t ignore the Palestinian problem. It will only get worse. The only way to ease tensions, avoid escalating Palestinian-Israeli violence and achieve partnership with the moderate Arab states is through Palestinian independence, via the Arab Peace Initiative.

Yesh Atid’s message was simpler and more direct: If Netanyahu doesn’t find a way to renew talks with the Palestinian Authority and move toward a permanent two-state peace pact, Yesh Atid will leave the coalition, topple the government and force new elections.

Shelah said his party was pressing for the convening of an international conference to shepherd Israeli-Palestinian peace negotiations, with the Arab Peace Initiative as a basis for the talks. The point of a conference is that the backing of moderate Arab states — principally Egypt, Jordan and Saudi Arabia — can lend legitimacy on the Palestinian street to difficult concessions that the Palestinian leadership has trouble making on its own. At the same time, Arab states’ participation can drive home to the Israeli public the reality of regional acceptance as a product of a peace deal.

The Arab initiative promises that if Israel permits a Palestinian state along modified pre-1967 armistice lines and finds a “just and agreed” solution for Palestinian refugee — previous talks have discussed a symbolic “return” of some thousands of refugees — the Arab states will “consider the Arab-Israeli conflict ended.” They’ll establish normal diplomatic relations with Israel and “provide security” for both Israel and the Palestinian state. The plan was adopted unanimously by the Arab League in 2002 and renewed several times since. It’s also been endorsed by the 57-member Organization of Islamic Cooperation, with Iran abstaining.

Not their main interest, “but it is an essential sticking point.” It doesn’t have strategic importance, but it has an intense emotional hold on the Arab street. Without an Israeli-Palestinian peace agreement, there’s no chance the Arab leaders will risk agreeing to reconciliation and partnership with Israel.

Lapid, Netanyahu’s finance minister, began pushing in early August for Israel to initiate an international conference on Gaza reconstruction after Operation Protective Edge ended. The conference would begin by discussing Gaza and then segue into a broader peace agenda based on the Arab League initiative. The idea, first proposed by Lapid ally Yaakov Peri, a former Shin Bet director, quickly won the backing of justice minister Tzipi Livni, who discussed it with Netanyahu.

Netanyahu neither accepted nor rejected it. On August 20, he spoke to the press for the first time about the Gaza war opening the possibility of a “new political horizon” based on “changes in the regional alignment.” That comment prompted a buzz of speculation in Jerusalem and Washington that Netanyahu was warming to the idea of regional framework for Israeli-Palestinian peace talks.

It quickly became apparent, however, that Netanyahu’s conditions for renewing a peace effort with the Palestinians were farther than ever from the Palestinians’ terms. Earlier in the summer the prime minister had pointed to Hamas’s arsenal in Gaza as proof that Israel couldn’t give up military control of the West Bank. At the August 20 press conference he said he was hoping to renew negotiations “with a Palestinian government that is committed to opposing terrorism.” Translation: no talks until the Palestinian Authority ends the reconciliation pact with Hamas announced in April. The reconciliation helped precipitate the collapse of the peace talks sponsored by Secretary of State John Kerry.

Netanyahu kept up his attacks on Hamas and the Palestinian unity government throughout September, culminating in his September 29 United Nations speech where he declared that “Hamas is ISIS and ISIS is Hamas.” Paradoxically, he’d sent a delegation to Cairo a week earlier to begin indirect talks with the Fatah-Hamas unity government on a long-term Gaza cease-fire. More recently he’s okayed a series of agreements with the Palestinian unity government, including having Abbas’s troops police Gaza border crossings and help oversee the use of construction materials, to prevent their diversion to Hamas terrorists. But he still hasn’t agreed to renew peace negotiations with the authority, because it’s linked to Hamas. It’s inconsistencies like those that make skeptics believe he just doesn’t want to negotiate peace.

What Netanyahu’s been saying, Shelah said, “is that he expects some sort of normalization with the countries in the region before we move forward on the Palestinian issue. That’s not going to happen.”

The danger in making unrealistic demands is that the situation isn’t static. The longer Israel ignores the Arab states’ offer to talk peace, the more the world will turn against Israel. That doesn’t just mean disapproval. It’s trade, travel, international credit and more.

“We saw it at the donors’ conference,” Shelah said. “We saw $5.4 billion pledged for reconstruction, while Israeli interests — starting with demilitarization — were not even discussed.”

In reality, Netanyahu has shown more flexibility than he’s given credit for. He quietly told Kerry last winter that he’d negotiate borders on the basis of the 1967 lines — the centerpiece of the Arab initiative — if he could have certain conditions met. But the conditions weren’t met. Netanyahu couldn’t openly admit he’d been willing to deal because the right would have bolted his coalition. Similarly, he quietly imposed a freeze last spring on settlement construction outside the main blocs and Jerusalem. It’s infuriated the right. But because it’s unstated — and building continues in East Jerusalem — he gets no credit there, either.

Essentially, his contortions to keep his right flank calm undermine any credibility abroad. And the more isolated Israel becomes, the angrier his center and left flanks become. Hence the threat from Yesh Atid.

Bibi Tries and Fails To Bypass the Palestinians