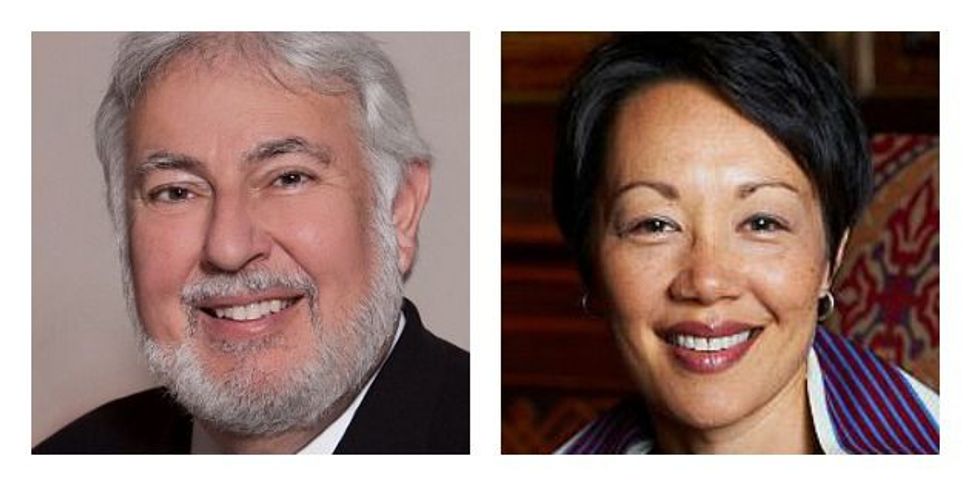 Two Voices: Rabbis Shalom Lewis and Angela Buchdahl both spoke about Israel during their High Holidays sermons. That’s where the similarity ends.

After a brutal, confusing summer of fighting between Israel and Hamas, many American rabbis were supposedly skittish about talking about Israel from the pulpit. Why, even The New York Times reported on this rabbinic reluctance: “Debate among Jews about Israel is nothing new, but some say the friction is now fire,” Laurie Goodstein wrote on September 22, just before the beginning of Rosh Hashanah. “Rabbis said in interviews that it may be too hot to touch, and many are anguishing over what to say about Israel in their sermons during the High Holy Days.”

“The reason is simple: Rabbis have no comparative advantage,” Beinart wrote on September 22. “American Jews are inundated with commentary about Israel. They read about it in newspapers and websites. They hear about it on TV and radio. They attend lectures about it at their local universities and Jewish Community Centers. There’s not much rabbis can say that the people attending High Holiday services won’t have already heard. That’s especially true because although American rabbis may feel deeply about the politics and foreign policy of the Jewish state, it’s not their area of expertise. And by becoming B-grade pundits, they undermine their authority.”

Evidently, a great many American rabbis didn’t get the memo.

We have only anecdotal evidence of how many spoke about Israel, since no scientific survey was conducted. Some rabbis post the text of their sermons afterward; others who don’t mind using technology on a holy day record their speeches for their websites and YouTube.

But even anecdotes are telling. One rabbi who broached the subject left congregants shrugging at remarks that were seen as dutiful but timid. Another brought members to their feet in spontaneous, uncharacteristic applause. And at least one rabbi expressed sentiments so incendiary that, in our opinion, they ought to have been publicly rebuked.

The fighting in Gaza has ceased for the moment; the rockets aimed at Israel are silent, the accounting of death and destruction proceeding in relative quiet. Even if the rawness has subsided, however, the fault lines exposed last summer remain as vivid as ever.

The following is an imperfect analogy but a useful thought experiment:

A Christian preacher mounts the pulpit on Easter Sunday and when describing the sin and evil in the world for which Jesus died, points to extremist Israeli Jews who burn mosques and destroy homes and have even set an innocent young man on fire. These Hebrew-speaking, Torah-waving Jews represent only a tiny fraction of Israelis, the preacher notes, but they can still wreak havoc and terror.

Then the preacher compares these “silent” partners to the Germans who didn’t stop Nazis and the Russians who tolerated Stalin.

Call in the ADL.

Except that those quotes came directly from an explosive sermon delivered on the second day of Rosh Hashanah by Rabbi Shalom Lewis to his congregation, Etz Chaim, a Conservative synagogue in Marietta, Georgia. As reported by our Nathan Guttman, Lewis called for a “holy crusade” against all Islamist extremists whom he described as barbarians, and argued that any people, leader or nation who did not agree was complicit in their evil acts.

Lewis is entitled to his analysis of Middle East terror and even to his outlandish views. But to utter such incendiary words from the pulpit on one of the holiest days of the year, to falsely tarnish an entire religion because of the horrible, inexcuseable acts of a few, to incite unbridled violence — “To Israel we say, do whatever you must… to crush this vile enemy” — is irresponsible and unacceptable.

Moreover, Lewis’s strident remarks firmly cut off conversation; to disagree with his message or his tone is to sacrifice Western and Jewish values and abet terror. This is the way not to lessen Jewish friction over Israel, but to stoke the fire — to make it that much harder for a synagogue or a community to learn the language of dialogue.

It’s the opposite of what happened at Central Synagogue.

Rabbi Angela Buchdahl said she didn’t want to sermonize about Israel during her first High Holidays as the senior rabbi at Central, the prominent Reform synagogue in Manhattan, but she felt called to speak about her questions and uncertainties and love.

All through the summer, “I hungered for moral clarity in a conflict that presented impossible choice,” Buchdahl said at a Yom Kippur service so large that it met in a concert hall at Lincoln Center. She recalled her “anguish at seeing the picture of those four young Palestinian boys killed on the beach from rocket fire, wondering if the Jewish state I love really was as careful as it could have possibly been.”

She acknowledged the alienation of many Jews from the policies of the current Israeli government, and worse, the apathy, fatigue and even shame the next generation of American Jews feels toward Israel. But then she pivoted to argue for something deeper and more fundamental: a clearer annunciation of why Israel should matter to every Jew and why she — the first Korean-American rabbi — loves Israel and considers it “the beating heart of the Jewish people.”

Like Lewis, Buchdahl noted the constant threat of annihilation by the “millions who want the Jewish state obliterated.” But Buchdahl’s answer was not to annihilate those enemies in return. It was to strengthen Jewish knowledge of and commitment to a holy land with all its miracles and all its flaws. “We owe it to ourselves to know what we are talking about and even to disagree civilly and knowledgeably,” she said. “Real love does not wither when it faces imperfection. Real relationships are based on knowing.”

This was a rabbinic sermon; it wasn’t an editorial or a position paper, and Buchdahl clearly (cleverly?) avoided expressing political opinion and offering solutions. But she acknowledged confusion and complexity. She acknowledged Palestinians, for heaven’s sake! Instead of pleading for war, she spoke of security and justice, peace and love. By doing so, she opened the door to conversation in a way more absolutist views on either end of the political spectrum cannot.

In our mind, American Jews need more Buchdahl and less Lewis. We are, however, stumped by one unavoidable fact. When Buchdahl finished speaking, her congregation gave her a spontaneous standing ovation. So, however, did Lewis’s.

What does that say about us?