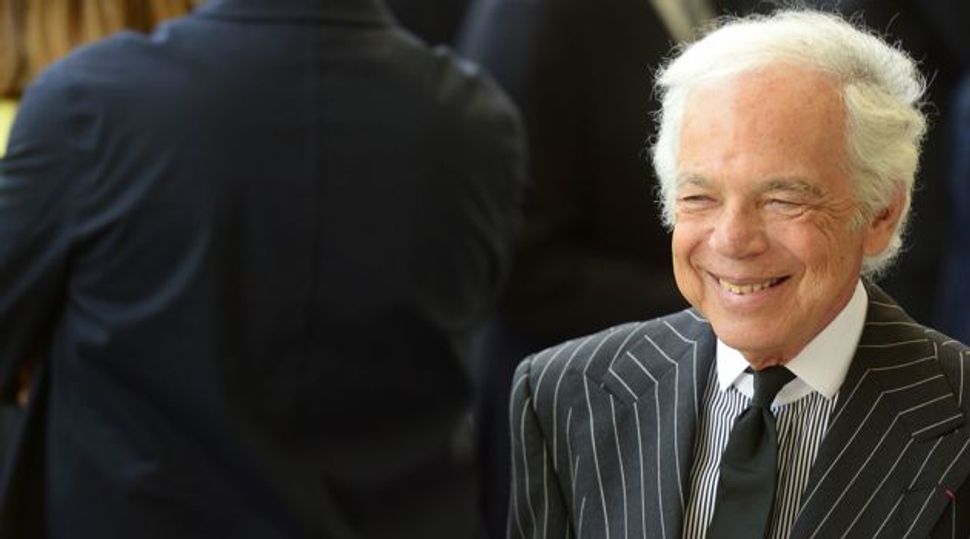 Not Just Shmattes: Ralph Lauren, a yeshiva boy born with the last name Lifshitz, essentially killed the WASP by making WASPs of all of us. Image by Getty Images

Of all the methods of self-expression, the act of dressing oneself probably gets the least respect. Our culture sees an interest in clothes as a sign of vanity and materialism, the fixation of brainwashed lemmings who rely on the capitalist-driven edicts of glossy magazines to tell them who they are.

This tension between how we talk about clothes and how we feel about them is largely a result of the fact that the public conversation on the subject almost exclusively takes place within the confines of fashion journalism. Women lack not only the platforms, but also the vocabulary, to talk about clothes in a manner that is absent of elitism, perfectionism and greed and instead focused on articulating the natural and intimate relationship between a woman and what she puts on in the morning.

Two new books attempt to reconcile this by giving people a platform to speak with sincerity and curiosity about their sartorial choices. For “Women in Clothes,” writers Sheila Heti, Heidi Julavits and Leanne Shapton compiled more than 600-pages of surveys from a wide mix of women, essays, conversations and photography all examining how what we wear affects our lives. And in “Worn Stories,” Emily Spivack has compiled a collection of mini-memoirs from creative types like Marina Abramovic, Maira Kalman and David Carr all centered on a single item of clothing.

“We are always asking for something when we get dressed. Asking to be loved, to be f–ked, to be admired, to be left alone, to make people laugh, to scare people, to look wealthy, to say ‘I’m poor,’ ‘I love myself.’ It’s the quiet poem in the waiting room, on the subway, in the movie of our lives. It’s a big deal,” one of the survey respondents explains in “Women in Clothes.”

And it’s a quiet poem that has been recited since ancient times, when the act of seeing and being seen, so necessary for us humans, was also managed, processed and manipulated through clothes.

Following the expulsion from Eden, as the story goes, Adam and Eve feel compelled to cover up their private parts with fig leaves, an immediate side effect of their nascent self-awareness. In the story of Joseph, one of the grandest narratives in the Bible, clothing is a major part of the plot, and in terms of not just theme, but also form. What Joseph is and isn’t wearing is carefully noted throughout the tale, and it is the chasm between what he has on (a really fancy coat) and who he is (a little pisher) that gets him into trouble.

The story of Tamar also pivots on who’s wearing what. Tamar uses clothing in two ways in her attempt to strip herself of her black widow status and become a mother. The first is to conceal herself as a harlot in order to seduce her father-in-law Judah, and the other when she withholds Judah’s robe tie, signet and staff — vital signifiers of identity in an age when possessions were few — in order to hold him accountable for the child with which he impregnates her.

In all these stories, we feel the weight of clothing in circumscribing identities and, when necessary, changing one’s fate. Sometimes the clothes shape us, and other times we are shaped, or at least long to be shaped, by the clothes. Either way, it is never a matter of frivolity.

This is the case in the Jewish mourning practice of keriah, or the ripping of one’s clothing following the death of a loved one. Keriah is an ancient practice mentioned in the Bible a number of times, including when Jacob mistakenly believes that Joseph has died, and also when King David hears the bad news about Jonathan and Saul.

What better sign of the power of clothes than their use in one of our main mourning rituals? The paradoxical idea that clothes are an extension of inner selves as well as a shield protecting our inner selves is integral to the logic of the custom; the tear becomes the bridge between strength and vulnerability, creation and destruction, our present selves and what was lost.

I suspect that the same nearly mystical belief in the power of clothing to shape one’s position in the world was somewhere in the back of the minds of the large number of Jews who worked in the shmatte business during the 20th century. Sure, many had experience as tailors from the Old Country, but Jews didn’t stop with the fabrication of clothes; they were part of a movement that saw to it that anyone could remake himself, and ultimately the world he lives in, through what was put on in the morning.

The best two examples of this is Ralph Lauren, a yeshiva boy born with the last name Lifshitz who essentially killed the WASP by making WASPs of all of us, and Levi Strauss, who somewhat accidentally captured America’s hard-work ethic and rugged individualism in a pair of pants — jeans.

For Jews, assimilating into the United States was very much about dressing the part, an argument that Forward columnist Jenna Weissman Joselit makes in her 2001 book “A Perfect Fit: Clothes, Character, and the Promise of America.” Fashion was “the most literal expression of who we were as a nation,” Joselit says about the early part of the 20th century, when the right clothes could transform an Eastern European immigrant or an emancipated slave into a citizen, and a virtuous one at that. “Americans placed their faith in clothing,” she writes in the introduction. I’m not sure we’ve lost it.

There’s a dark side to all this faith, of course. All this consumption, sometimes conspicuous and sometimes not, has us destroying the planet and racking up debt in one fell swoop. There are many of us who have way more than we need, and many of us who have way less, and then a good lot of us in the middle who have enough but still long for more. And then there are those of us, generally women and people of color, who have to look and dress a certain way in order to be taken seriously.

However, just because part of our relationship with clothes is wrapped up in these vicious cycles doesn’t mean the conversation should be limited to it. We need to talk about clothes and style, but on our own terms. There are many terrible reasons that a woman shouldn’t covet a particular purse or dress, but those reasons certainly aren’t all terrible. Giving a woman a chance to explain herself is to acknowledge thoughtfully and sensitively the power of clothing that has existed from the beginning.