Left Out, then Lingering: Hoshana Rabba and Shemini Atzeret 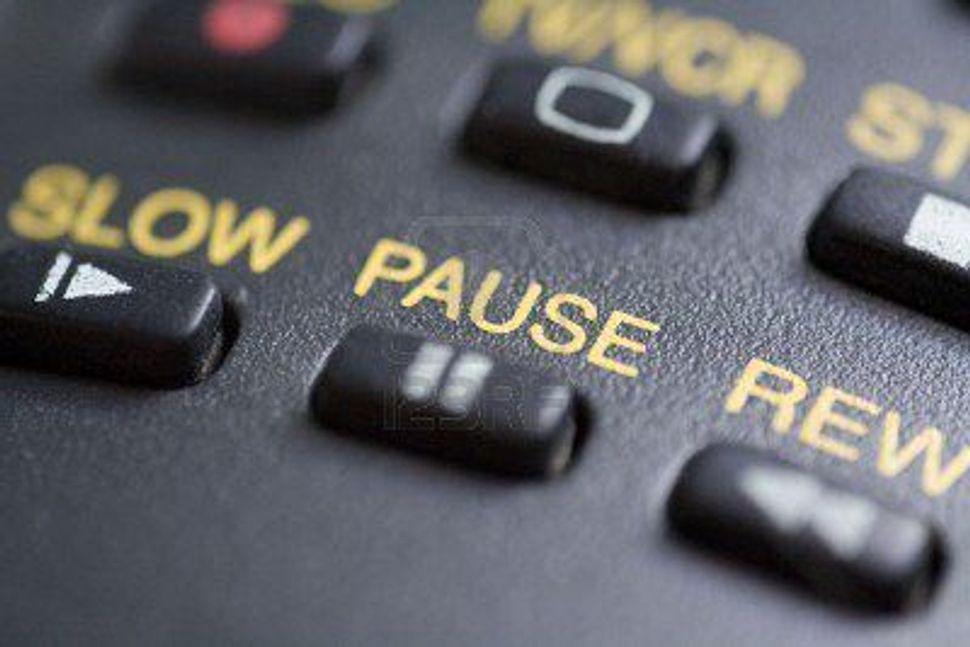 I was hoping to get through this holiday cycle without debating the mechitza — the wall that divides the genders in Orthodox shuls.

I’ve committed to sampling all iterations of observance without prejudice, including segregated worship.

But then on Wednesday I visited the historic Carlebach Shul for Hoshana Rabba — the seventh day of Sukkot, a day which carries its own specific festivities. As the exuberant singing filled the narrow sanctuary, I felt gobsmacked by the difference between the men’s side and the women’s.

This is no hyperbole: it was as if two entirely different services were happening within spitting distance of each other.

The men, packed together under prayer shawls, were turbocharged in their swaying and chanting, lifting their lulavs to the sky or to the east, closing their eyes as they kissed their yellow etrogs. Even just the visual snapshot from the rear of the shul — a sea of tallises among hoisted branches — was stirring.

The women — a fraction of the number — seemed anesthetized by comparison. A little sway here, a limp lulav-wave there. The energy was flat compared to the ecstasy on the other side of the screen.

I reacted not as a feminist, but as a Jew.

Despite what some might assume about me — due to my mother’s public role in the women’s movement (she co-founded Ms. Magazine) — I didn’t feel moral outrage; just visceral deflation. I wanted to be where the party was. I felt barred from the rapture I was watching through the mesh barrier. Separate wasn’t equal.

I can hear the rejoinders already:

*How do you know these women weren’t feeling — internally — just as much as the men? (I don’t, but if they were, they sure hide their jubilation.)

*Orthodox worship is foreign to you; if you understood it, you’d find your own high. (So if I was accustomed to the mechitza, the stark disparity in energy would feel trivial?)

*Why couldn’t you attend to your own experience instead of coveting someone else’s? (The jamboree next door was hard to ignore.)

I don’t fault Carlebach. Its history is venerable, its music is beautiful, the congregants seem content.

But it’s the first time I’ve come up against Judaism’s clear-cut exclusion: You see that joyful group over there? You can’t join them. You can’t stand, sway, or sing with them. Sukkot’s credo, “z’man simchateinu” — the season of our joy — is a little more joyful for the other half of the room.

The seventh day of Sukkot — Hoshana Rabba, (“great supplication,”) marks the last of the Days of Judgment which began back on Rosh Hashanah.

(Those of us who panicked as the proverbial gates closed during the Neilah service on Yom Kippur evening had a little more atonement-time than we thought.)

The Zohar — the chief text of Jewish mysticism — suggests that on Yom Kippur our verdicts are sealed and on Hoshana Rabba, they’re delivered. We had an additional 11 days to alter our decrees.

That’s why the greeting on the seventh day of Sukkot is “a guten kvitel,” or “a good note” : “Your verdict should be positive.”

It’s possible I damaged my verdict by grumbling inwardly about the mechitza, but there was no time for further rumination on the subject, because the next day was everyone’s hands down favorite festival…(Drumroll…)

What’s the easiest way to stump a Reform Jew? Ask him to explain Shemini Atzeret.

What’s the easiest way to stump an Orthodox Jew? Ask him to explain Shemini Atzeret.

That’s a bit of an exaggeration, but it gets at something true: Shemini Atzeret is a little foggy for everybody.

It requires no particular commandment and has no historical narrative.

In Israel and in Reform shuls, it’s conflated (celebrated simultaneously) with Simchat Torah —the completing of one Torah cycle and beginning of the next; everywhere else, it’s marked on the day before Simchat Torah.

On its face, Shemini Atzeret is simply the eighth day of Sukkot. (“Shemini” means “eighth.”)

Except that Sukkot is seven days, so the eighth day isn’t technically Sukkot anymore.

Except that some Jews still sit in the sukkah on the eighth day.

Except that some of those sukkah-sitting Jews believe they should no longer eat in it on the eighth day.

And some ditch the sukkah entirely and go inside, because at the end of Sukkot, we’re supposed to consciously return to our homes.

Leaving aside the question of whether Shemini Atzeret is Sukkot’s last gasp or its own separate holiday, there’s no question that it’s a dud. And it gets no respect.

But now that I’ve had to research it, there’s a kernel that sparkles: it’s the message that, after the unceasing intensity of Elul, Rosh Hashanah, Yom Kippur and Sukkot, God is asking us to stay just a bit longer.

“Atzeret means ‘stop,’” says Joel Goldman, my Orthodox Hebrew tutor, who lets me “stop” our lessons to drill him about Judaism.

“God says to the Jewish people, ‘Stay an extra day. We’ve had this long progression from Rosh Hashanah and we’ve spent so much time together and now we’re going to part for a long time until the next pilgrimage holiday. So tarry with me an extra day — a day whose only purpose is relationship.’”

“It’s the intimate holiday,” echoes Rabbi Asher Lopatin, the president of Yeshivat Chovevei Torah, a progressive Orthodox rabbinical school founded by Rabbi Avi Weiss in Riverdale, NY. “’Atzeret’ means detaining… We’re ending this period of holidays and pulling everything together. It fosters the intimate relationship between God and the Jewish people.”

Four years ago, Lopatin had a more literal experience of being “detained.” He was planning to leave his Chicago pulpit of 18 years to emigrate to Israel with his family. But then his young daughter was diagnosed with cancer and plans had to change. (She is in remission today.) Lopatin’s jocular demeanor and playful neckties obscure any visible trace of that difficult period; but it’s hard not to see a parallel with the holiday’s theme: stay back a while.

“There are reasons for staying back here and to feel so blessed,” he says to me. “I love what I’m doing now and I think God has placed me in this place. But I still very much miss Israel. I was just recently visiting Beersheba and felt that pull.”

He brings the conversation back to this holiday: “The term, ‘atzeret,’ means stop and come in. As busy as God is with the whole world, God is also interested in what I’m doing. There are no special customs. No special foods. No crying. No shofar. The message is, ‘Just sit there and be there.’”

How rarely does Jewish ritual tell us to “just be there”? It sounds more zen than Jewish, but I could use that message more than most. I vow every year to do more “sitting” and “being there,” as Lopatin puts it, but too soon I’m off rushing again. That is, until something pulls me up short, and it has, on several occasions. Sometimes life forces us to pause. Lopatin’s personal story highlights the two sides of Shemini Atzeret: sometimes you choose to stop, and sometimes life stops you.

Rabbi David Kalb, an Orthodox rabbi who davens with Lopatin at Hebrew Institute of Riverdale, (also founded by Avi Weiss,) and is the Director of Learning and Innovation at my Reform synagogue, Central Synagogue, uses pop culture to explain — or sing — the crux of Shemini Atzeret: “Oh won’t you stay…. Just a little bit longer….”

Then he moves from his 1960’s pop-music source to a medieval one: Rashi, the medieval commentator, likens God’s entreaty on Shemini Atzeret to a king who asks his children to stay at his feast: “Please, stay with me just one more day, [for] it is difficult for me to part with you!”

Kalb asks me, “You know what is also interesting about this reading of Shemini Atzeret? God’s loneliness. What Rashi is really saying is that God wants us; God needs us. It’s funny to talk about God’s wants and needs… But that’s clearly what we want to say as a community about God: God has issues, like all of us.…There’s something very compelling about God having issues. Yes, we need God on these holidays, but God needs us, too.”

I spent Thursday morning, Shemini Atzeret, at Hebrew Institute of Riverdale, where Avi Weiss is senior rabbi and Lopatin and Kalb are members.

When Weiss got up to give a sermon about how this holiday is not one of history but of transition, he announced a major transition of his own: after 40-plus years, he will be stepping back, handing off the senior rabbi position to someone else while focusing on speaking, teaching and writing.

There were no gasps, clearly because congregants knew it was imminent. But there was a sustained ovation and tight embraces afterwards.

Though I was standing on the women’s side of the mechitza in this shul as well, I felt none of the exclusion. Maybe because the two sides have comparable space, maybe because the mechitza wall is low, maybe because the bimah is situated deliberately in the center of the sanctuary. Or probably because the faces in both sections appeared similarly entranced and involved. I could see how separate can feel more equal, even if I’ll always prefer to pray not just alongside my daughter, but also my husband and son.

Left Out, then Lingering: Hoshana Rabba and Shemini Atzeret