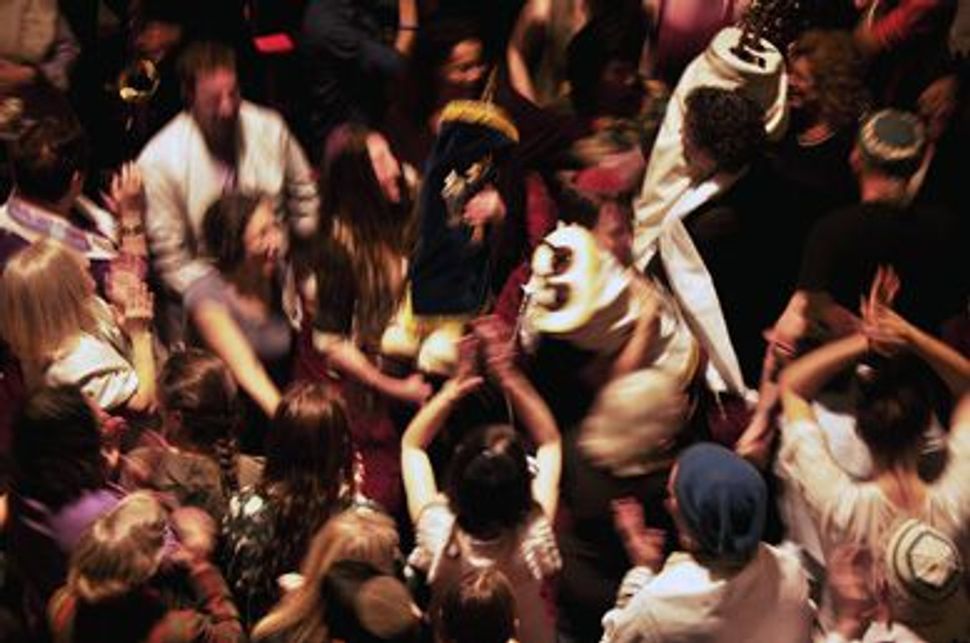 I wimped out on the single malt scotch.

My Orthodox friends told me single malt is the drink of choice on Simchat Torah –- which celebrates finishing and restarting the Torah cycle –- but I could only stomach a gulp (I favor margaritas).

Then I was off to dance with the Torah for the first time in my life at B’nai Jeshurun, the Conservative shul known to insiders as “BJ” on the Upper West Side.

The line extending down the block was my first clue: this was a happening. I’d been told BJ was “the place to be” in Manhattan on erev Simchat Torah, but the numbers astonished me: Jews, Jews and more Jews – even a critical mass in their 20’s and 30’s, (the demographic sweet spot for all those professional Jews who fret about continuity).

They were queueing like they would outside a hot nightclub, waiting to get into the bash we could hear from the street.

Walking into BJ was like entering – midstream – a raucous, contagious wedding reception. The sanctuary, cleared of chairs or pews, throbbed with music, singing, and dancing.

By dancing, I mean stomping and clapping; bouncing and hopping; dosey-doe’ing and tango-ing; and human chains connected by hands on shoulders weaving in and out of other human chains, dodging smaller circles of revelers surrounding someone bobbing with a Torah.

Torahs were passed around liberally, handed off with a tallis so whomever danced with the scroll could be draped in a prayer shawl.

In the loud bedlam, I ran into two familiar faces from my shul, Central Synagogue: Associate Rabbi Maurice (Mo) Salth and Interim Rabbi Andrew Straus, who clearly got the same memo that BJ is where it’s at on Simchat Torah. I also spotted other rabbis from other shuls – Irwin Kula, who co-founded Clal (a center for learning,) and Elliot Cosgrove, who heads the Conservative Park Avenue Synagogue, plus Amichai Lau-Lavie, spiritual leader of the experimental Lab/Shul. Knesset member Ruth Calderon was also in the house.

Rabbi Mo had been to this hoedown before, so he gave me the lay of the land: BJ’s two Argentinian-born senior rabbis, Rolando Matalon and Marcelo Bronstein, were taking turns at the microphone, leading rousing niggunim (songs without words) with the help of their popular senior cantor, Ari Priven.

Each niggun represented one of seven hakafot – the circuit taken with the Torah when it’s removed from the ark, which calls to mind the seven circles under the wedding chuppah or the circles of wedding rings. The Torah is the ketubah; we’re wedded to The Book.

Every hakafah lasted at least 15-20 minutes and began by inviting one particular age group to walk under a human-made bridge formed by the rest of us.

Though the next hakafah cohort was just over my bracket – “everyone between 50-59” – I found a spot on the bridge-line and tented my arms across from a stranger. As the 50’s group snaked its way through our gauntlet, it was impossible not to notice how blissed-out people looked. What a difference from the solemn faces of Yom Kippur.

We held the bridge till everyone had walked under it, many holding Torahs, while the rabbis led us in a recurring prayer:

Since Mo was holding his four-year-old son, he had no free hands to latch on to the line dance, but Rabbi Andy and I decided to brave it, breaking in to join one of the chains, jogging to keep up with the frenzied pace.

The exhilaration was instantaneous. I let go of how clumsy I looked, how badly I sang, how sweaty were someone’s hands on my shoulders behind me. I just found myself laughing.

“If you jump in, you get caught up in it.…It really opens you up,” says Rabbi Asher Lopatin, whom I interviewed before the holiday began. As the new-ish president of Yeshivat Chovevei Torah, a progressive Orthodox seminary in the Bronx, he looks forward to the unfettered whirl. “You don’t have to know any fancy dance steps. There are no complicated lyrics; just ‘lai lai lai,’ or ‘dai dai dai.’ The tunes go over and over again.”

He likened it to King David dancing before the ark in the Book of Samuel. “On Simchat Torah, we don’t worry about the usual decorum in the synagogue –Kavod hatzibur (public dignity),” Lopatin says. “We get rid of those inhibitions and connect with the Torah and each other.”

The whole experience hit me as the answer to so many of the challenges facing organized Judaism: How do you make people feel a gut spirituality? What does it take to get Jews in the door and keep them coming back? Where can every generation feel comfortable together?

Rabbi David Kalb, a Modern Orthodox rabbi who is the director of Learning and Innovation at Central Synagogue (Reform), says that’s exactly what celebrations like Simchat Torah can do. “Sometimes I’ll just stop in the midst of the dancing and say, ‘This is the way things should be,’” he says. “When you dance with people in a circle, you don’t worry about their politics or whether you agree with them. You put everything aside. The fact that we’re ending this holiday with that experience, kind of says to me, ‘Why can’t we be like this all the time?’”

I’m asking myself the same question while I careen around the sanctuary: “Why can’t more Jews be like this?” I have that sudden, hopeful thought that if we all gathered to dance with this kind of abandon once a year, we’d not only have fewer internecine tensions, we’d be putting a firmer stake in the ground for Judaism overall.

“How powerful is it,” Kalb says, “that the Torah is something so sacred – we’re so careful with it all year round, but at the end of the day, we’re dancing with it. Passing it. It’s out there. It really makes a statement: the Torah should be out there in the world. It shouldn’t be sequestered.” 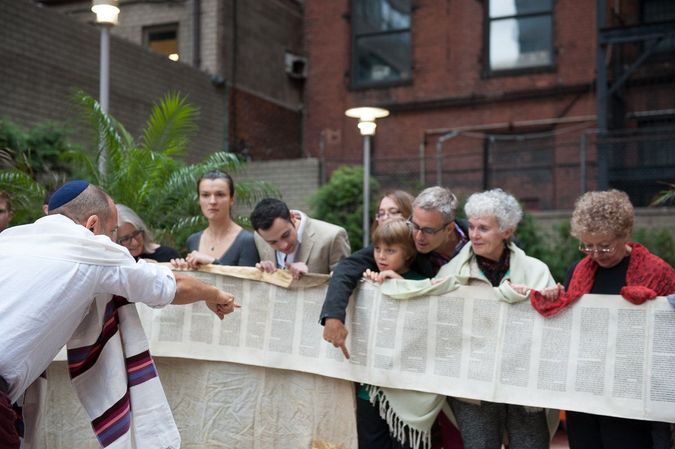 Simchat Torah is not in the Bible – it’s an invention of the rabbis, who turned the second day of Shemini Atzeret into a separate holiday. “Scholars think it emerges in the 10th, 11th century,” says Rabbi Michael Strassfeld of New York’s Reconstructionist SAJ synagogue. “It probably has to do with the two Torah reading cycles.”

He means that the Torah used to be completed over the course of three years instead of one. But once the method changed, concluding the Torah and restarting it again immediately was considered cause for a party.

“When the annual cycle started to dominate,” Strassfeld says, “then Simchat Torah emerged. Because there was this sense of ‘Oooh, look, here’s a great thing. We’re finishing Deuteronomy and starting Genesis again. We’re showing the cycle is an unending cycle.’”

When I ask Strassfeld how he breathes life into the repetition, he harkens back to the metaphor offered by his pal, Rabbi Burt Visotzky, in one of my earlier articles.

“So, yes, it’s Fall again,” he continues. “But I’m actually a year older and this thing happened in my life between this Fall and last Fall. I’m not the same person, even though I’m coming back to the same place. Both things are true: I’m the same, but I’m different. The Torah is the same, but it’s different.”

That could be our slogan, since we seem to need one these days: “Try Judaism: The Same is Always New.”

I’m struck, in all these interviews, by how much meaning is doggedly mined by rabbis month after month, for every ritual, symbol, passage or prayer. The toil of the clergy, it’s becoming clear to me, is unearthing the new thought in the ancient word, again and again and again.

It’s what is missing for so many Jews, I believe: the freshness of all this. They see the recurrences so often as colorless, meaningless redundancy. Taking their medicine.

But the dancing wasn’t colorless or meaningless. And the redundancy of the niggunim had the effect of a trance. Sometimes the predictable is magical.

On Simchat Torah morning Friday, I stopped by Park East Synagogue, the 126-year old Orthodox shul, led by Rabbi Arthur Schneier, who stood at the back of the bimah draped in a tallis shimmering with mirrored squares, calling up congregants for the honor of an aliyah.

He turned to praise them personally for their devotion to Torah, and then they went to stand under the huppah to chant.

Rabbi Lopatin had made me aware of the Torah readings themselves – the vital link between Moses’ death in the last book, and God’s creation in the first. “You’re giving something up – you’re giving up Moses – it’s a sad moment,” he says. “But you’re also thinking how fresh things can be. Wow: This new thing. It all feels new, even though we did it all last year. Even Torah, you’re supposed to learn it fresh each time.”

He stresses how openhearted the ritual is – that every single congregant gets an aliyah on this particular morning, even though each person chants the same section of Deuteronomy. The aliyot go on as long as necessary until each person has had a turn. “It’s not like needing tickets on the High Holy days,” Lopatin says. “Everyone is welcome. The rabbis say that the Torah belongs to every single Jew. You’re not coming as an outsider but as an insider: It’s your Torah. Come as an owner.”

Rabbi Kalb adds that Simchat Torah is the ultimate expression of this democratic – and ecstatic – take on Torah. “It’s a book that’s open to everyone, not just the elite,” he says. “Where is there in the world a people that love a book so much that they dance around with it? It’s a celebration of the biggest book club in the world.”