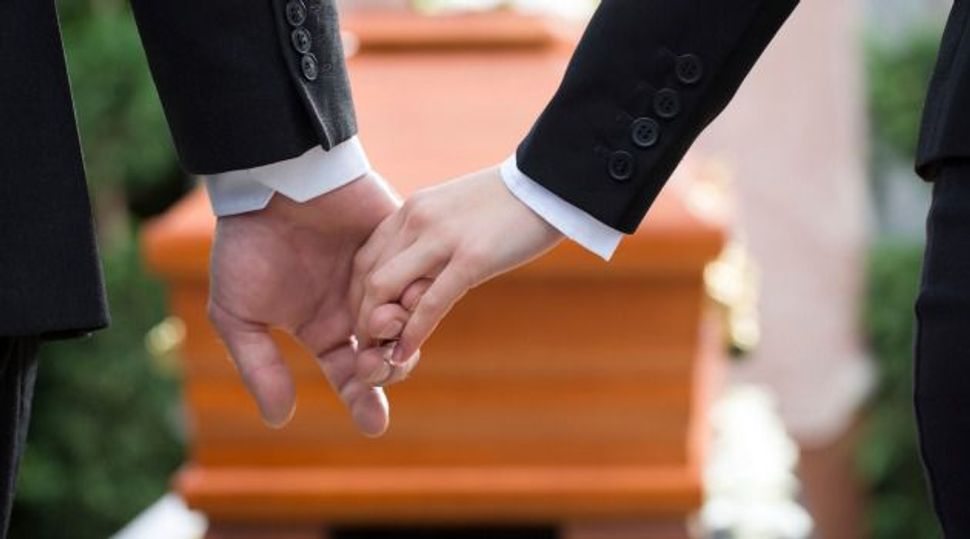 Editor’s Note: The following 2011 Yom Kippur sermon by Jack Moline has been edited for style and length. Below, you will find a brief survey allowing you to send us your end-of-life stories, a selection of which may be published. We hope to prompt conversation on that most difficult question for the living: How are we to die?

Before I say anything else, I want to say that I am healthy.

Twenty-five years ago and two months, I arrived here to be your rabbi. I was 34 years old, the father of two little girls. Before the year was out, my father had received the diagnosis that eventually became his death sentence. At 63, my father had survived two major heart attacks, multiple bypasses, a bout with melanoma and surgery to remove a cancerous testicle. He had been controlling his diabetes with a very strict diet for five years. When he came to visit me here the one and only time, a then-member looked at him and said to me, “It’s hard when our parents become elderly, isn’t it.” He died of brain cancer at age 65, shortly after his fortieth wedding anniversary.

I do not expect to succumb to anything in the next six years, and Ann and I intend to compete for the family record of length of marriage, which stands in the mid-sixties at the moment. If I say I am looking forward to meeting all of my grandchildren, it is not to put pressure on my children, but to say that I am determined not to have any of them named for me. But who knows?

You might make the argument that the liturgy of the day gives me cause to say what I have to say. Within a few minutes of the conclusion of these remarks, we will sing together mournfully: “On the new year it is written and on the fast day of atonement it is sealed: who shall live and who shall die.” But listen to the list: who will live a full life and who will die young, who by fire, who by water, who by sword and who by beast, who by hunger, who by thirst, who by earthquake and who by plague. They are, most of them, sudden deaths without warning. Death that comes unexpectedly.

That’s what death was, mostly, for a lot of human history. Some people died slowly, but most people died quickly. Our tradition is pretty good at dealing with such deaths. But what our tradition is not so good at dealing with is death that does not come so unexpectedly. It is not the fault of Judaism. It is the by-product of the remarkable changes in medicine in our lifetimes. For example, doctors are apparently required to be much younger than they used to be. And they have at hand resources that make the outpouring of care my beloved father received in the last six months of his life seem primitive. It takes longer to die than it used to. And we have no piyyut, no devotional poem that warns us that last week it was written and today it is sealed, who by cancer and who by stroke, who by heart failure and who by emphysema, who by degenerative muscular disease and who by dementia.

It is unfair to expect that doctors will bear the burden of guiding their patients through the hazardous existential waters of facing the inevitability of death. I suspect that you are like me in this regard: I want compassion from a doctor, but not distraction. I want my physician focused on what he or she knows, which is my medical care, not the deeply personal issues that require reflection and introspection.

So I want to make the argument that each of you must be braver than you think you can possibly be and have a devastating conversation with the people you love.

I am not talking about preparing a living will. That you should do in any event. The conversation I mean is not about death. It is about dying.

The living will you have is of no value if the people charged with making decisions with you or for you do not know what the words mean to you. My cousin, Rabbi Arnold Goodman, recalls visiting a congregant in the hospital and seeing tubes and wires connected all over her body. “I thought you had declared you did not want extraordinary means used to keep you alive,” he said. She replied, “It’s amazing of how your definition of ‘extraordinary means’ can change.”

So let me try to show you what that conversation might look like. I am not certain I will succeed. I cried uncontrollably when I thought about it. I cried as I watched my family cry when we talked about it. I cried as I prepared these words. But I feel compelled to encourage you to give a gift to the people you love to spare them the legacy of guilt that an uninformed decision leaves behind. Please have this conversation while you are healthy and of sound mind. And if you change your mind, have the conversation again. Take your time. Think it through. And do not be concerned that you are tempting the evil eye or the Angel of Death. Then take a deep breath and speak honestly.

Some people look back at high school or college as the best time of their lives. For me, being a part of this family of ours is better than anything I ever imagined. My love for each of you reaches places so deep inside I didn’t even know they existed. Seeing each of you grow into the person you have become, finding purpose in life, blossoming into a unique personality — these have been my greatest pleasures. In return, you have made me a better person than I ever would have been without your love. I want to be better than I am because I think you deserve it from me.

But the fact is, everybody has to die and I am no exception. It may be that my death will come suddenly, in which case I hope you will see to my burial according to Jewish law and take the full week to acknowledge my absence from your life. But if my death comes incrementally, if I am facing an ebbing away of what makes me me so that you have to make decisions about how to proceed with my care, I do not want to leave you guessing about what I want.

I want to be able to enjoy your company. And I want you to be able to enjoy mine. I would not mind becoming something of a burden on you — each of you has been a burden I have carried at some point in my life, and they were the happiest burdens I can remember. But if I am afflicted with an illness that will so decimate me that your lasting memory of me will be in my final misery, please spare me the misery and you the memory. Without your love and presence in my life, I have very little to live for. And my heart would break if, because of a decision you make, you cannot be at peace with my life or my death. Act on my instructions on my behalf and be confident that you have shown me all the love and respect a husband or father could want.

I hope that when I die you will not feel like you have already grieved my loss.

My father told me near the end of his life that he was not afraid to die. I don’t share his courage, though I want to. But I am not afraid at all about being dead. I am entirely confident that the life my body surrenders will return to its source, and with or without my knowing it, I will live forever as we all will. In the meantime, if I have to look back at what I have accomplished in this world, I only have to look at you and know that I am leaving a better place than I found. I love you, and I know you love me.

My friends, my dear friends. Enough of you have shared your agony with me at moments of decision making that I could not abandon the rest of you to uncertainty. And as I approach the age at which my father, who was no less certain than I that he would live out his 120 years, at which my father reached the Rubicon of his life, I could not abandon my family to that uncertainty. I love you all too much, and I love them more.

My words are not your words. In six months or six years, my words may not even be my words. By then, I hope that at least in this small corner of the community, these conversations will be more common and easier to pursue.

Tell Us Your End-of-Life Story