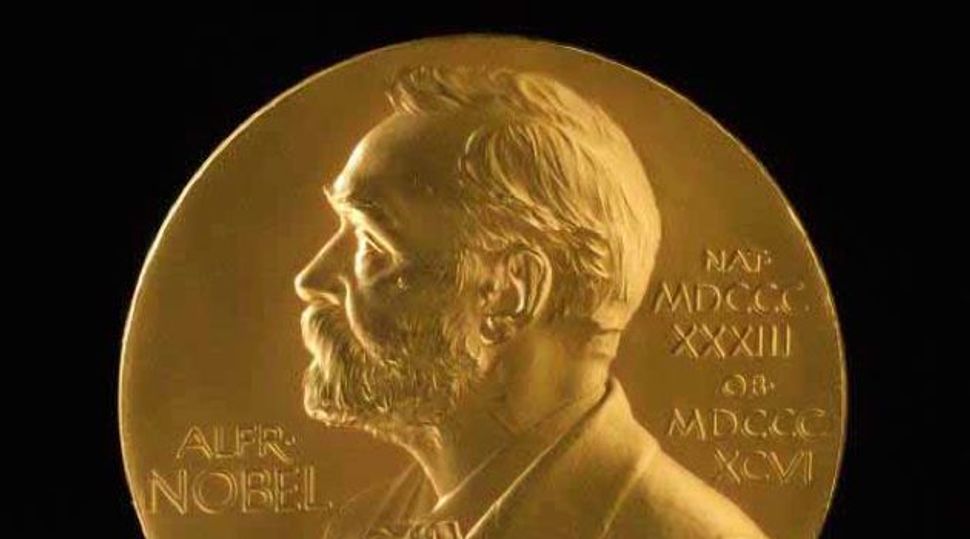 Last of the Medals: Will Jews be able to claim the same disproportionate number of science prizes going forward? Image by Getty Images

The Nobel Prize committee has now announced the last of its science selections for 2014, and for the first time in this new century, there are no Jews among the laureates. This fact would hardly be worth noting if not for another fact: that three laureates a year have been Jews since 2000. And if not for the fact that, until now, each year’s Nobel announcements have unleashed a torrent of Jewish self-congratulations. And then, suddenly, no genius Jews to celebrate. This single shutout year, on its own, means nothing. The same thing happened in 1999 and before that in 1991, and neither year foreshadowed the end of Jewish success in Stockholm. But since this year’s Nobel announcements don’t afford the opportunity to publicly extol the achievements of Jews in science (a Jewish rite of autumn), perhaps they offer a welcome chance to reconsider what these achievements really mean and what they don’t.

Had a couple of Jews, and maybe an Israeli, been awarded the prize, the article you would be reading right now would probably go like something like this: In the 113 years since The Nobel Foundation began anointing the world’s greatest scientists, Jews have won more than 100 times as many prizes per capita than the rest of the world. Why? One of two reasons. Maybe because many generations of matching the smartest rabbis with the most marriageable maidens left Jews with genes for discernment and perspicacity. Or maybe because generations of valuing learning above all gave Jews habits of mind and bookish values that, in the modern world, make them wizards in the laboratory.

But it won’t. The oversized place of Jews in modern science is not a product of some ingrained Jewish talent — it is the product of unique historical circumstances. Jews became fully emancipated in large numbers at precisely the time when science, as we know it, was taking form as a modern profession, toward the end of the 19th century and the beginning of the 20th. Masses of Jews were trying to assimilate into American society at just the moment when the sciences were beginning to disrupt and transform these societies.

In the United States, immigrant Jews and, especially, their eager and ambitious children saw in science a progressive force that could help replace an arbitrary old WASPish order with a new society based on fact not faith, achievement not pedigree, and innovation not fealty to hoary and inscrutable customs. Also, they saw science as a universalist and universalizing force (“Science is wholly independent of national boundaries and races and creeds,” Columbia University anthropologist Franz Boas wrote in a manifesto signed by 1,284 of the world’s leading scientists in 1938). It was, in part, this notion — that science could help create better, more meritocratic societies, in which Jews like everyone else could find a place — that accounts for the magnetic appeal of science for generations of Jews through most of the 20th century.

Over the past half-century, this enthusiasm has lost some of its force as our ultimate faith in science has waned. Hiroshima, for many, was the start of a long nightmare in which science produces menace, not progress. As deserts spread, and storms grow more violent and unruly, many wonder if science and scientific technologies have not given rise to problems that scientists and technologists will be unable to solve. When tyrants and zealots can produce deadly viruses in dirty laboratories from recipes they download from the Internet, the notion that science and scientific technologies by their nature spur progress, award merit and militate against age-old hatreds like anti-Semitism has come to seem quaint and implausible.

What’s more, science offered past generations a solution to a problem that Jews no longer face in an acute way. American Jews today, as a group, enjoy wealth that their forebears could hardly have imagined. The same is true for access to power wherever it resides, in politics, business, law, media and academia. If science was seen through much of the 20th century as a tool for a dual reform — making Jews more fit for American society, and making American society more fit for Jews — such reforms are no longer needed.

Intellectual traditions decline slowly, and the strength of American Jewish opposition to teaching “intelligent design” in public schools suggests that Jews continue to hold science in higher regard than any other ethnic or cultural group in the United States. Still, the high-water mark of Jewish avidity for science has passed, and much of the passion has waned, as the steadily declining numbers of American Jews entering the sciences demonstrate.

It is worth remembering that Nobel Prizes are the most lagging of lagging indicators. Most laureates win for work they did decades earlier. It is for this reason that one may expect the number of Jews who win the prize to diminish in the next few years, regressing inexorably to the mean. This is bad news for those who wish to see Jews as brilliant by our nature. But it is good news for those of us who, looking back on the fervor with which our grandparents (and theirs) dreamed of forging a society in which Jews have a place, can conclude only that our incipient failure in Stockholm is a sign of our extraordinary success at home.

Noah Efron is the author of the recently published “A Chosen Calling: Jews in Science in the Twentieth Century” (Johns Hopkins University Press). He teaches the history of science and technology at Bar-Ilan University.