When Palestinians Bury an American Teen 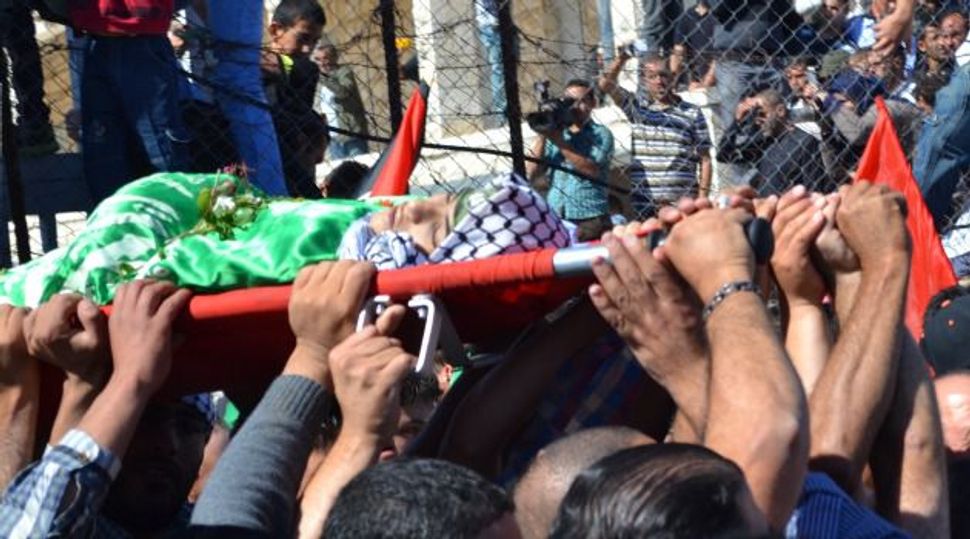 On Sunday afternoon, the main street in Silwad, a village north of Ramallah in the Israeli-occupied West Bank, was lined with parked cars for as far as the eye could see. Palestinians from all over the area had come to pay their respects to Orwa Abd al-Wahhab Hammad, the 14-year-old killed in clashes on October 24 with the Israeli military. Posters with Hammad’s photo — a serious-looking teen with his black hair combed forward — were plastered on bumpers, windshields and on fences throughout the town, each one bearing the imprint of Hamas, Fatah or the People’s Front for the Liberation of Palestine.

According to news reports, the Israeli Defense Forces said it opened fire on Hammad after he was getting ready to hurl a lit firebomb toward Route 60, an account which Palestinian officials dispute. A family member said that Hammad was with a group of boys throwing rocks when he was killed.

Hammad was raised in Silwad, a village of around 6,000 people marked by a stone Arabic sign and a marquee advertising a USAID-sponsored road project. But Hammad was also a United States citizen, the second one claimed by the Israeli-Palestinian conflict in the past week. On Thursday, an East Jerusalem Palestinian named Abdel-Rahman Shaloudi plowed a car into the Ammunition Hill light rail station, injuring seven people and killing three-month-old Chaya Zissel Braun, an American citizen whose family had taken her to the Western Wall for the first time that day. Shaloudi was killed by Israeli police as he fled the scene. On Sunday, an Ecuadorian woman injured in the attack died from her wounds.

The U.S. Department of State commented on the incidents separately, condemning “in the strongest possible terms” the attack in Jerusalem and calling for a “speedy and transparent investigation” of Hammad’s killing. In both cases, spokeswoman Jen Psaki urged the sides to “avoid escalating tensions.”

Hammad was one of six children in his family, all of whom hold American citizenship, according to his 20-year-old sister Tasneem Khalek. The family’s American ties come through Hammad’s father, who runs a car dealership in Louisiana and returns to the West Bank every three months to visit the family. Hammad’s mother lives in Silwad, but was attending to family business in Jordan when her son was killed. Both parents returned to the village for the funeral.

Khalek recalled her brother as a smart boy who relished his summer trips to the U.S., where he would gorge himself on Burger King and McDonald’s. “He liked America and how peaceful it was,” she said. He was looking forward to his upcoming trip abroad next summer, and hoped to return to the U.S. for college one day to pursue a degree in electrical engineering. In Silwad, he was an avid boxer and horseback rider, with friends from school and beyond.

“I knew him in karate,” said Amir Khalil, a 15-year-old friend who had moved to Silwad from Arlington, Texas five years ago. “We rode motorcycles together and stuff like that.”

At his funeral, Hammad was memorialized as a shahid, a martyr, by the mourners present. Thousands of young men gathered in the parking lot of a boys’ school in Silwad as a muezzin’s prayer rang from a nearby mosque. Waving Hamas, Fatah, and PLFP flags, as well as the Palestinian national banner, they shouted in unison, calling to “free Palestine” and for retribution for Hammad’s killing. A pair of men in dark clothing stood on the roof of the school, periodically shooting bullets into the air. As the muezzin’s prayers wound down, the men made their way to the house where Hammad lived. The home was decorated with a storey-high poster of Hammad on which the image of a man on horseback carrying a gun and a Hamas flag had been superimposed. Dozens of women lined the balcony.

The men retrieved Hammad’s body, his face wrapped with a keffiyeh, and brought it back to the schoolyard to pray. Then the funeral procession began. Hammad’s body was carried through the winding main street of Silwad, where most of the stores had been shuttered out of respect for the occasion. The men continued past the city’s municipal building and the post office and a small olive grove, finally reaching the highest point of the village overlooking red terraced hills dotted with olive trees. They wound in a circle with their flags and listened as a speaker memorialized Hammad, his voice amplified by a boom box.

Back at the family home, Khalek sat on a plastic chair in the hallway. Dressed in a long black robe with a beige hijab, she wore a stunned expression as she spoke about her brother. He had gone out to play with his friends, she said, and was caught up in the Silwad clashes with the Israeli military, which had become a regular Friday occurrence in the past year. (One woman present attributed the clashes to the tensions at the Al Aqsa compound in Jerusalem.)

“He was not the kind of kid to like violence,” she said. “He was a peaceful kid.”

Khalek said that her family planned to sue Israel in order to bring the IDF soldier who killed Hammad to justice. She said that she hoped that America’s close ties with Israel would result in the U.S. government paying attention to her brother’s case.

Naomi Zeveloff is the Forward’s Middle East correspondent. Reach her at zeveloff@forward.com or on Twitter @naomizeveloff

When Palestinians Bury an American Teen