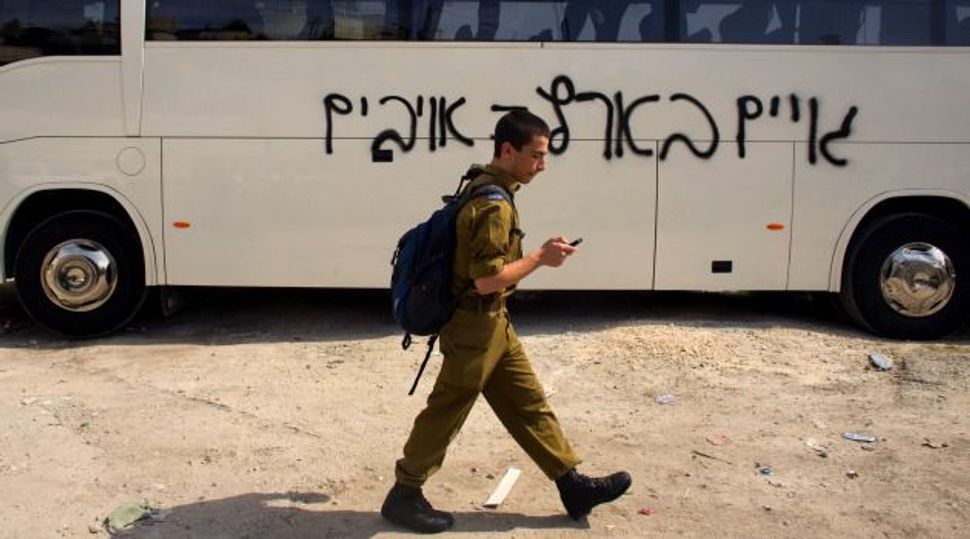 The striking thing about this is not just the willingness of Israeli youth to speak out against segregated buses, but the fact that they’re turning to American Jewish leaders to appeal, on their behalf, to Israeli leaders — specifically, Prime Minister Netanyahu and Defense Minister Ya’alon. The subtext seems to be that they don’t feel they can make themselves heard (or heard successfully) in their own country without a powerful intermediary. We can chalk this up partly to their perception that “Ya’alon is caving in to a well-organized campaign of the extreme right, who hold powerful positions inside the Likud party.” Here’s the rest of their letter:

This unfortunate decision is a disastrous one in any respect. Apart from being a severely miserable decision in every moral aspect, it also adds a very powerful weapon to the arsenal of those seeking to undermine Israel as a Jewish and democratic state.

Side by side with you, we, the Young Israeli Labor, the official young branch of the Labor Party, lead an uncompromising struggle on Israel’s international standing. Exactly because of our love for Israel, we must at present do whatever it takes to stop this poor decision from realization.

I call upon you to turn to Israel’s Prime Minister, MK Netanyahu, and demand that he interferes in this matter and prevents Defense Minister Ya’alon from surrendering to the extremist right-wing in Israel, which is jeopardizing our continuing existence as a Jewish and democratic state.

Some American Jewish organizations have already gotten the memo.

As of today, J Street is running a student-led online action directed at American Jewish leaders, using the hashtag #PWYT, which stands for “pray with your tweet.” Here are a few of the first Heschel-style appeals to go out into the Twitterverse:

@jfederations: Show your leadership, stand with young Israelis, and speak out against segregated buses in Israel #PWYT

We are deeply concerned regarding the recent decree by Israel’s Defense Minister, Moshe Ya’alon, stating that there will be separate bus lines for Israeli Jewish settlers and Palestinian workers traveling from central Israel to their homes in the West Bank.

Despite the Defense Minister’s assertion, there appears to be no security reason for this new policy, based on statements by top IDF security officials. According to reports from the IDF Central Command Maj. Gen. Nitzan Alon, Palestinian workers entering Israel are not a security threat since they receive pre-approval from the Shin Bet and the Israel Police in order to receive their work permits. Authorized workers, with permits, have not been implicated in terrorist attacks inside Israel according to the Central Command.

Israel’s democracy is one of her greatest strengths and we fear that Minister Ya’alon’s proposal threatens that democracy.

Young American Jews, along with their Israeli counterparts, are already expressing their gratitude:

.@URJ: Rabbi Jacobs: thanks for standing against the segregation of Israeli buses! http://t.co/SFRHnUu3gf via @jstreetu #PWYT