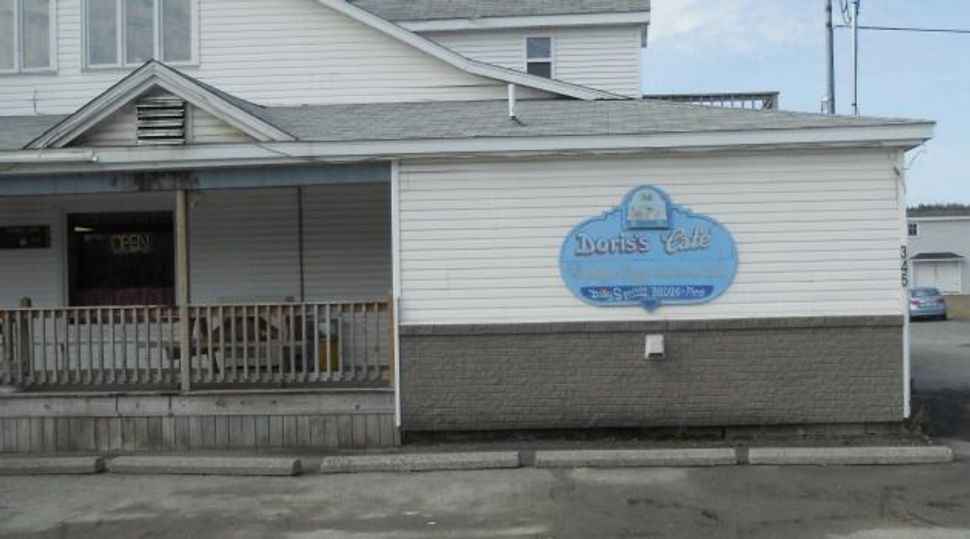 Our man in Maine has some words of wisdom for the reporters who are covering the story of the nurse who was quarantined over fears of Ebola. Go to Doris’s Cafe and grab the $1.90 French toast breakfast./Josh Nathan-Kazis

Fort Kent is a Maine town of 4,000 people in the middle of nowhere. I got blank stares back in May when I told friends I was heading there for a story about my great-grandfather, who grew potatoes and sold cars in town. Today, Fort Kent is Ebola-famous.

Used to be if you searched for “Fort Kent” on Twitter, you got a few University of Maine students and a guy who tweeted his jogging routes. Now, it’s a million AP headlines and pictures of Hickox on her mountain bike.

Hickox, who was detained in Newark after returning from a Doctors Without Borders stint treating Ebola patients in Sierra Leone, has defied her quarantine since returning to the home she shares with her boyfriend in Fort Kent. “I’m not willing to stand here and let my civil rights be violated when it’s not science-based,” she told reporters last night.

Fort Kent is a few hundred yards from the Canadian border, and most people there speak French. My impression of the town when I visited was of a place outside of the American mainstream. I wrote:

There are no strip malls in Fort Kent. There are some chain stores — a McDonald’s, a Rite Aid, the Sears. But the restaurants are local, the motels are local, some of the gas stations are local, even the supermarket chain is local. The local real estate developer I met was a Fort Kent native with lumber money. Flipping through the radio dial, it sounds like most of the stations are in French. English-language television wasn’t available here until the late 1960s. Fort Kent feels like an island that the American monoculture has yet to colonize.

That’s hard to reconcile with images coming out of town now of cameras set up on Maine Street and camped out at Hickox’s house.

I do have some advice for the media hordes sleeping at Northern Door Inn: Skip the free breakfast and drive over to Doris’s Café. French toast is $1.90.

Also, watch out for moose.