Should You Give Jewishly? 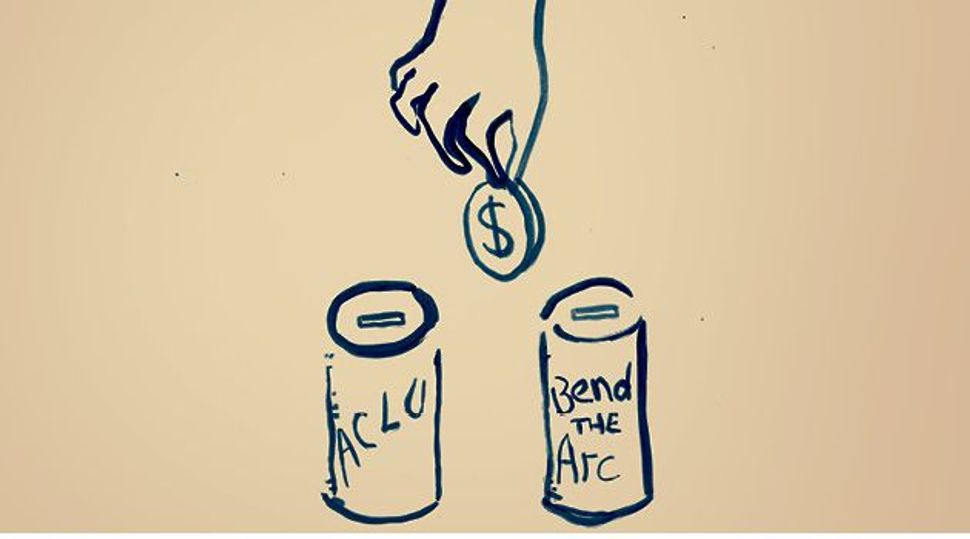 Which One?: It’s more than just a question of how we spend our money. Image by Kurt Hoffman

As the end of the year approaches, our inboxes and mailboxes fill with solicitations for giving, as organizations seek to capitalize on our holiday season generosity and desire to boost our tax write-offs. So who to give to?

It is hard to give well. It takes time to figure out one’s priorities and then determine where our money or time will have the greatest impact. For me, and I imagine many of us, there is one more thing to consider, and that is whether or not to give Jewishly.

Why give to a Jewish development organization like American Jewish World Service instead of Mercy Corps, fight for immigrant rights through Bend the Arc rather than the American Civil Liberties Union or join AVODAH: The Jewish Service Corps, rather than AmeriCorps or the Peace Corps?

At the heart of this issue isn’t just how we spend our money or time, but exactly where assimilated Jews should draw the line between the rest of the world and ourselves. We want to be part of a Jewish community, but also to be connected to the non-Jewish world; we want our children to have Jewish friends, but not only Jewish friends, and we want to live in Jewish neighborhoods, but also value the power of diversity to enrich our lives. In short, we long to be Jewish, but never parochial. It’s not that easy.

Giving is a way to build community. We create bonds with those who share our values and dedication to a cause, and we even sometimes create bonds with the recipients of our charity. From writing a check to spending a year of our lives working with the Jews of Moldova, we are declaring to ourselves and to the world, “This is where I stand; this is who I am.” So the question is, for me and perhaps you, where exactly do I stand and how Jewish should it be?

According to the breakdown of where the money went, the majority went not to providing basic necessities for people in need, but for things like synagogue capital campaigns, enrichment for the Jewish community in the United States through after-school programs, summer camp and adult learning opportunities — and, of course, Israel.

At first glance, in strict utilitarian terms, this seems wrong. Don’t we have an obligation to help save lives before we fix the synagogue’s stained glass windows? It isn’t quite that simple.

“The strongest predictor of charitable giving among Jews is their level of engagement with, and connection to, the Jewish community. Jewish connection and engagement strongly predicts whether Jews give to any cause, and it very strongly predicts whether they give to a Jewish organization,” the report states. Engagement might mean belonging to a synagogue, having a Jewish spouse or friends, volunteering for a religious or charitable organization, or any other connection to others that is in any way Jewish.

What I take from this is that when we give to Jewish organizations, whether or not the money then goes to back to the Jewish community or is used for healing non-Jewish sick children, we are taking part in the creation of a community that inspires a culture of giving. Sure, there is something chicken and eggy about the whole thing, but it is nevertheless proof that giving or doing something as Jews is often good not just for Jews, but for everyone else, too.

In 2005, a group of researchers did a study on gentiles who took in Jews during the Holocaust. The study found two common traits among them. The first is an aptitude for danger, and the second is their sociability. Those willing to take a chance in order to save the lives of others were the ones who reported more frequent interactions with friends and family — or a community.

We shouldn’t limit our compassion to fellow Jews, but it appears that the Jewish community is a great place to learn how to be compassionate.

Should You Give Jewishly?