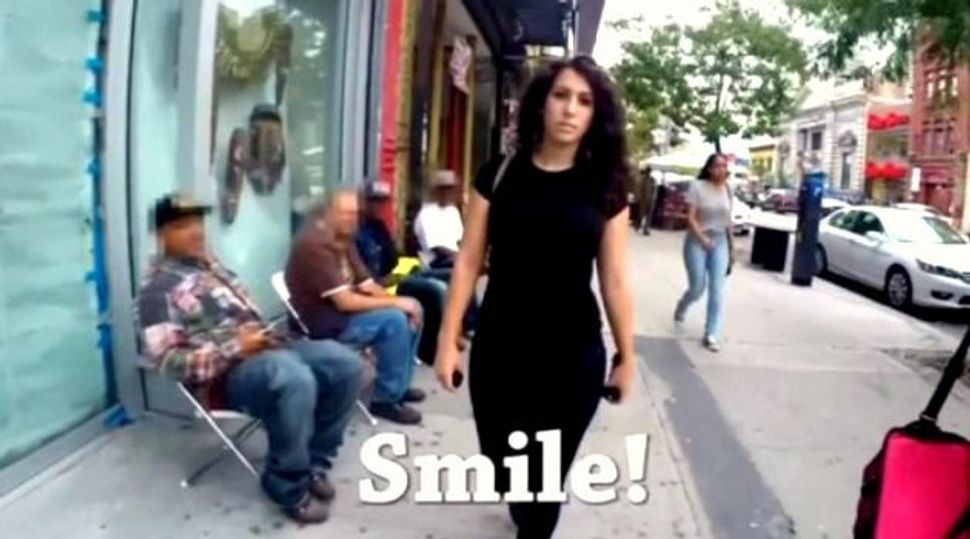 I’m sure you’ve seen it by now. A video made by the anti-street harassment group Hollaback shows a woman, the Jewish actress Shoshana Roberts, walking around in New York City getting unwanted attention from men.

The video struck me because, when I moved to New York ten years ago, two things happened: street harassment became more and more prevalent in my life, and I became more and more bold about speaking out about it. I read Rebecca Solnit’s wonderful book Wanderlust: A History of Walking, which examines the seemingly simple concept of walking from different historical perspectives. The takeaway was that as a woman living in a 21st-century metropolis it is still revolutionary that I can walk, alone, from Point to Point B.

But just because it wasn’t illegal for me to walk around alone didn’t mean that I could do so without being harassed. That came to a head in 2012, when I was living in a predominantly Satmar Hasidic neighborhood in south Williamsburg, Brooklyn. Frustrated by the fact that street harassment was not only taking place but coming from people within my own community, I began using specifically Jewish responses to the whistles, catcalls and questions about whether I wanted to get in their van. (Spoiler alert: I didn’t. Ever.)

The weeks that followed were so interesting, and the men’s reactions such a mix of damning and hilarious, that I documented the project for an article in Heeb magazine. The piece got reactions all over the spectrum — some women saying they admired my nerve, a lot of men saying that I wasn’t hot enough to get hit on and that the real problem in the world was prejudice against men. There were also charges of anti-Semitism.

After the piece ran, I started getting emails from people suggesting new comebacks and responses I could use the next time a Hasidic man said something inappropriate to me or another woman. Since I ended up moving out of the neighborhood, I didn’t get a chance to use too many of them. But since Jewish street harassment is a real and ongoing thing, I present them here for you to use and enjoy.

1) Would you talk this way to Sarah? To Rachel? To Devorah?

Some men only care about abuse against women if it’s a woman they know personally — hence the “our wives, our mothers, our sisters” rhetoric so often used to get men on board with feminist issues. And since you may not know the names of the mothers and sisters of your street harassers, you can always start with the biblical matriarchs.

Some men get touchy about kol isha, the sound of a woman’s voice raised in song. If he’s going to say something that offends your ears, you have a pretty creative way to offend his in return.

Some women have opted to publicly shame street harassers and alert other women to specific guys who are a problem by sharing pictures of them on social media. When a guy starts shouting at you, whip out your phone and ask him to pose for a photo. Every time I did this, a guy froze like a deer in the headlights. It turns out that objectifiers often can’t handle being objectified.

4) My price is above rubies.

For some of the men in my former neighborhood, the only way to talk to them was to reference the Torah or Talmud. Quoting something like the famous “woman of valor” line serves two purposes: It shames them in a specifically Jewish way and also shows off my own biblical literacy, which makes some men uncomfortable. First women read, then they start revolutions.

This is a fun one. Pull back your shirt ever so slightly to reveal just those parts of your body that Jewish tradition idiosyncratically warns men to avoid glimpsing. Your collarbone. Your elbow. Your pinky finger. (That last one is taboo, believe it or not, courtesy of the Shulchan Aruch.)

6) I saw your wife in shul last week!

This doesn’t have to be true to work — and work amazingly. Immediately, you will see all the blood drain from the man’s face. If you’re feeling extra prickly, add: How many daughters do you have again?

I was never brave enough to try this one, but perhaps you are. Calmly walk up to a street harasser, tap him on the shoulder, and then announce that you are menstruating. Hello, emergency mikveh!

Oh, and while we’re on the subject of Jewish street harassment, there’s a new parody of Roberts’ viral street harassment video making the rounds. In it, Scott Rogowsky walks the streets of New York being harassed by Chabad “mitzvah campaigners.” This is different from Roberts’ video in a few noteworthy ways — for one, Rogowsky’s video is staged; for another, it doesn’t deal with a situation where there’s any threat to the walker’s personal safety. But for anyone out there who doubts whether Jewish street harassment exists in any form, watch this: