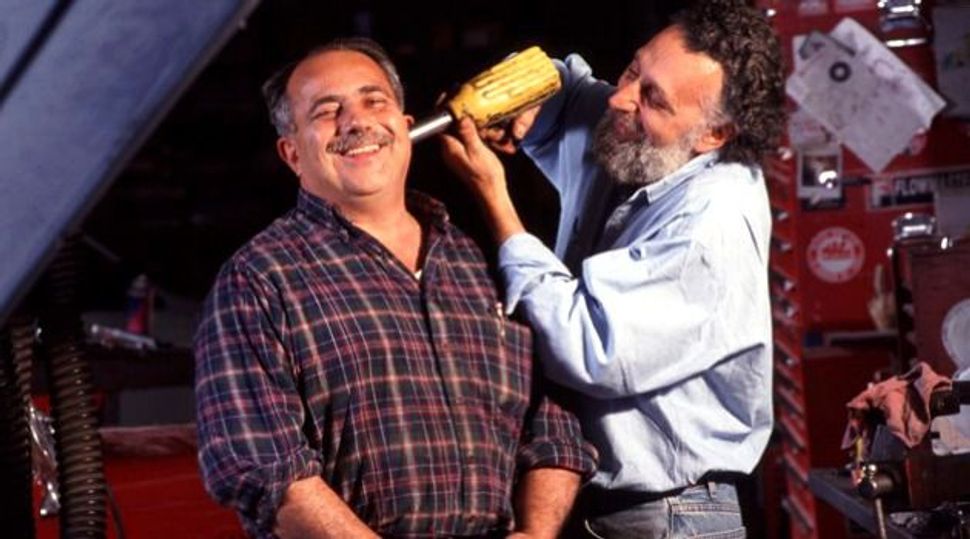 It’s a stereotype, but Jewish men have an ancient and mostly well-earned reputation for not being able to fix things. (There have been many notable exceptions to this, including my father, who could fix anything).

I have done my best to uphold this proud tradition of our people. Several years ago, I was riding my bicycle and the chain popped off the sprocket. Heartbroken, I proceeded to drag my bike back home. I would have to drive it to the local bike shop where it would be repaired by someone who — you guessed it — never went to Hebrew school.

Except that morning I had heard a brief news item — yes, on National Public Radio. An Israeli Orthodox rabbi had declared that Reform Jews were not really Jews. This was great. I celebrated my sudden loss of Jewish identity. I turned the bike over, put the chain back on the sprocket (and yes, got my hands dirty) and continued on my merry way.

That might have been the last time that I ever fixed anything. For that reason, and many more, I loved NPR’s “Car Talk” show. Tom and Ray Magliozzi (Click and Clack) had more than four million listeners a week, and I was one of them. That is why I will sorely miss Tom, who died this week of complications of Alzheimers’ disease at the age of 77.

“Car Talk” had more listeners than any other program on NPR. What was it about that show that we loved (and continue to love) so much?

It was because the Magliozzi brothers were the real deal — the realest of deals. There was no sham in their show, no pretentions. These were self-made men, in the style of our parents. They grew up working class in East Cambridge, and never shed their working class vowel-less Boston accents — even and especially after they attended MIT. They worked with their hands.

But there was another thing. “Car Talk” had deep Torah in it.

First of all, “Car Talk” was about repairing — cars, to be precise. The most overused cliché in contemporary Judaism is tikkun olam, repairing the world. It might be overused (and even misunderstood), but that notion has implanted itself within the Jewish soul and it has become our mantra.

Those ideas are lofty and abstract. “Car Talk” was about repairing real and concrete stuff, like carburetors. My first car was a 1966 Mustang (may its memory be a blessing). I lost two transmissions on that car. Years later, in reflecting on that experience, I liked to imagine what Click and Clack would have counseled me to do with it — fix or get rid of it. In the majority of cases, Click and Clack advised their callers to fix the car, not to get rid of it. That’s the Jewish way, as well: We fix the world; we don’t try to escape it.

And, to extend the metaphor just a little bit: Zionism was the “Car Talk” of Jewish history. Sure, it started as an idea, but it was about getting our hands dirty — repairing a history and building a land. For a people that has traditionally lived in its head (like me, I admit it), Herzl and Nordau were the Click and Clack of the Jewish world.

There was a second Torah of “Car Talk.” Tom, in particular, used his automotive experience with cars as a window into the wisdom of the world.

Tom reminisced about the day that he was driving to his job in a little MG that “weighed about 50 pounds” when a semi-truck cut him off. That was a wake-up call. It turned out that he hated his job. He wondered what would have happened if he had died right then and there, never having taken the opportunity to do what he loved. “So I pulled up into the parking lot, walked to my boss’s office and quit on the spot.” His brother chimed in, “Most people would have bought a bigger car.”

You wouldn’t have to look terribly hard to find the Torah in this story. Recall the words of the sage Hillel in Pirkei Avot: “Do not say, ‘When I have time, I will study.’ Perhaps you will never have the time” (Avot 2:4). Rabbi Eliezer said: “Repent one day before your death.” His students asked him: “Does a person know on which day he/she will die?” He said to them: “All the more so should one repent today lest he/she die tomorrow” (Shabbat 153a). In other words: Whatever you need to do to make your life whole, do it now.

Tom advocated reducing the national speed limit to a tortoise-like 35 miles per hour — this, at a time when most people were pushing for speed limits of 70 mph and more. And why? We are all going too fast, he said. We have to slow down and enjoy the ride.

That is precisely what the entire range of blessings does for us. They are about slowing down, enjoying the ride of life — and naming the ride and thanking God for it.

And finally, there was the Torah of Tom’s laughter. It wound up being the most beloved laughter in America.

Laughter has a key role in this week’s Torah portion. Sarah laughs when she learns that she is pregnant at an advanced age. The product of that pregnancy will be named Yitzchak, “he will laugh.” And, in fact, she was the first person in history to laugh. Sarah invented the sense of humor — humor, which is related to the word human. We become more fully human when we laugh.

God has a real sense of humor. God welcomed Tom into the supernal auto repair shop precisely during the week when the Torah teaches us about the birth of laughter.

Right about now, we can imagine Tom in the World to Come, meeting the prophet Ezekiel. Ezekiel is showing him the Divine Chariot, which needs just a few small repairs. Tom is telling him about the notorious problem with the axle on that particular model of chariot.

“Get rid of it, or fix it?” Ezekiel is asking Tom.

Oh, that laugh. We will always hear it. Thanks, Tom — or Click, or Clack — for being our rabbi.

Rabbi Jeffrey Salkin is a noted writer, speaker, and spiritual leader of Temple Beth Am in Bayonne, NJ. His many books on Judaism have been published by Jewish Lights Publishing and the Jewish Publication Society.