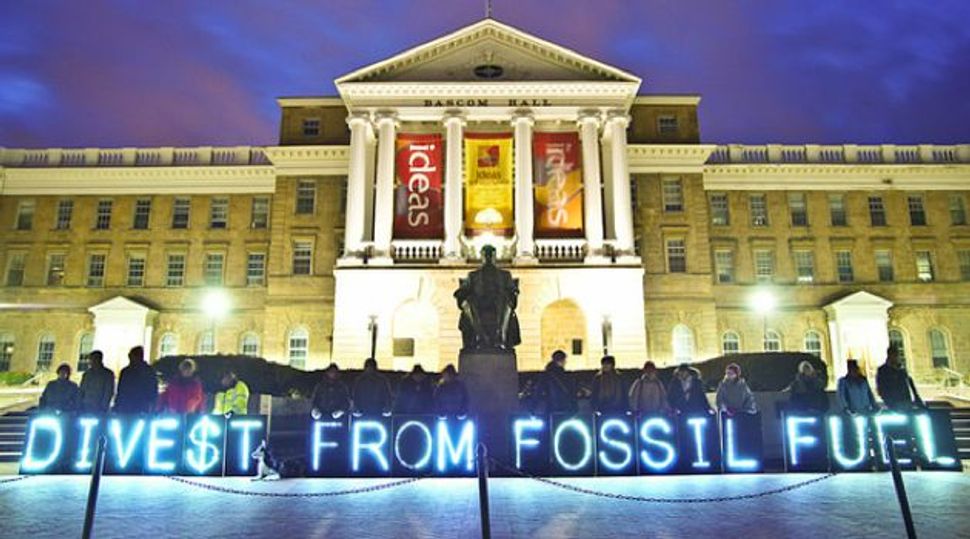 A New Energy: A protest for divestment at the University of Wisconsin-Madison. Image by Light Brigading/Flickr

Could it get any more catastrophic?

The latest report on global warming from the United Nations, released on November 3, describes a vision of the future that should make us snap to attention: massive food shortages leading to widespread hunger, refugee crises, the flooding of major cities and entire island nations, mass extinction of plants and animals, levels of poverty not seen for half a century and a climate so changed that it might become impossible to go outside during the summer.

Those who have been following the escalating warnings over the years can’t remember anything so dire. The bottom line of the report: “Continued emission of greenhouse gases will cause further warming and long-lasting changes in all components of the climate system, increasing the likelihood of severe, pervasive and irreversible impacts for people and ecosystems.”

With political leaders unwilling to make dramatic cuts to emissions — the only real way to curtail the problem — Ban Ki-moon, the United Nations’ secretary general, could only repeat well-worn exhortations like “Leaders must act” when greeting the news of the report at a press conference. He did, however, have one practical piece of advice, aimed specifically at major investors such as pension fund managers: “Please reduce your investments in the coal- and fossil fuel-based economy and [move] to renewable energy.”

Luckily, such a divestment campaign already exists. Over the past two years, at hundreds of college campuses all over the country, students and faculty have been pressuring boards of trustees to remove from their endowment portfolios any companies extracting or selling coal, oil or gas. It’s an ambitious effort, modeled on the successful and hard-fought campaign of the 1980s, to get universities to divest from South Africa in order to protest apartheid.

But it is also — so far — largely failing. Only a dozen schools have decided to divest. The only major prestige institution to do so is Stanford University, which announced in May that it would be divesting from coal assets. The presidents of the Ivies have all been outspoken in rejecting the strategy. As for Jewish universities like Yeshiva and Brandeis, which the Forward urged to divest back in the spring, they haven’t even returned our emails requesting comment on this issue.

What is the objection exactly? To listen to the university presidents explaining themselves, it appears to be twofold.

First, there is the financial explanation. As Harvard University’s president, Drew Faust, put it in October 2013, “Significantly constraining investment options risks significantly constraining investment returns.” Put simply, taking energy out of the portfolio will hurt these institutions financially, including, apparently, even Harvard, with its $33 billion endowment.

The choice is usually framed as a zero-sum game, with any change in investment having an adverse effect on students. Charles Skorina, a San Francisco recruiter for university endowments who is the managing partner of Charles A. Skorina & Co., explained it quite bluntly when speaking recently to The Wall Street Journal: “Are you going to save the world or screw students that depend on endowment earnings to fund scholarships?”

Then there is the risk of opening the floodgates to a plethora of other issues that might become subject to divestment demands. “The general approach is that we will not put restrictions on investments unless there is a strong and overwhelming case that we’re assisting highly immoral and unethical activities,” Columbia University President Lee Bollinger told his school’s Daily Spectator two years ago. “The bar has to be very high, and the reason is there are lots of things that people don’t like about the world.”

What might those other issues be? The most hotly debated — and plausibly a significant consideration for Bollinger and his colleagues — is the Boycott, Divestment and Sanctions movement, which is demanding that schools use financial means to protest Israel’s occupation of Palestinian lands. It’s not hard to see why university presidents would be spooked by this movement, which is loud, tenacious and would certainly make its own ultimatums on the investment portfolio if boards of trustees showed a willingness to budge. Is it possible that the concern over BDS — a protest movement supposedly meant to defend the rights of Palestinians, but frequently aimed at undermining Israel’s existence — is getting in the way of an urgent effort to defend the sustainability of our planet?

The dilemma is a painful one. On one hand is the attack on Israel: Although it hasn’t yet scored a single victory, it is deeply troubling. On the other hand is the threat of global warming: At stake is the very future of our civilization. In the end, there are times, as Bollinger implied in his statement, when an institution needs to cease tacit support for activities that are “highly immoral and unethical.”

And there is, of course, a precedent for this. The most obvious one is the anti-apartheid movement in which 156 colleges eventually divested from companies that did business in South Africa. But there are others. Here is what the president of Harvard at the time, Derek Bok, said about the university’s decision in 1990 to divest from tobacco stocks: Harvard no longer wanted “to be associated with companies whose products create a substantial and unjustifiable risk of harm to other human beings.”

On paper, universities understand the magnitude of the climate threat. Both Y.U.’s Richard Joel and Brandeis’s Frederick M. Lawrence have signed on, along with the presidents of nearly 700 other colleges and universities, to the Presidents Climate Commitment, in which they acknowledge that global warming is manmade and express deep concern about its “unprecedented scale and speed” and the “potential for large-scale, adverse health, social, economic and ecological effects.”

Sounds good. But this sentiment is channeled solely into promises to reduce the level of their own institutions’ greenhouse gas emissions, and not into any bigger commitment to combat global warming outside the campus. And this tells us a lot.

As the writer and Columbia University professor Todd Gitlin wrote recently in an Atlantic Monthly article, the fight over divestment is actually an argument over “how social change ought to take place.” The activists believe that the university can and should use its influence to make change in the world through actions like divestment, which are as much symbolic as they are financial, affecting the behavior of companies, forcing them to be more responsible. And the boards of trustees see their impact as confined to how they manage their institutions.

Except, that is, when it becomes too embarrassing not to do more. Inspiring that shame sometimes takes a long time: With apartheid it took six or seven years. With the planet fast approaching a tipping point, the divestment campaign has no time to waste. What it needs are more institutions like Stanford that are looking to act morally — and not just ones afraid of appearing to act immorally. We ask once again that Jewish universities, which do have this mandate, understand the role they have to play. Because the forecast is now abundantly clear. We turn away from it at our own peril.