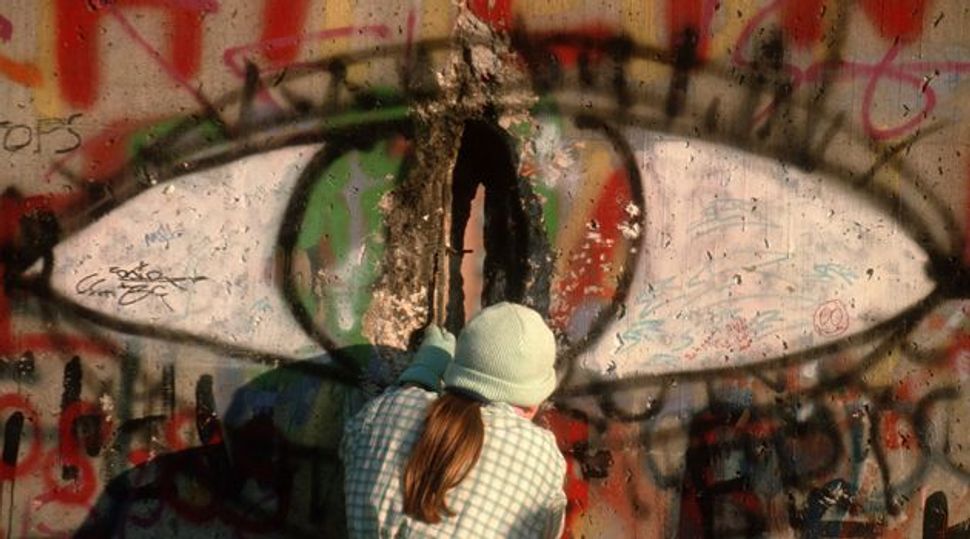 The Light Through the Cracks: Jews on both sides of the Wall benefited from reunification. Image by Getty Images

The French writer François Mauriac is quoted with the sentence, “I love Germany so much that I am glad that there are two of them.” This was pretty much the attitude among the Jewish community in Germany, in which I grew up in the 1970s and ’80s. The Jews of postwar Germany felt protected by what many considered a holy trinity: the bad conscience of the Germans, the presence of the Allied troops and the wall that made sure Germany would never again become a superpower and a threat to the world.

There were only 30,000 Jews to the west of the wall. Most of them were Holocaust survivors from Eastern Europe who had come as displaced persons and somehow missed the boat to Israel or to the United States in the later 1940s. They had settled there, but they were not settled. Many lived with their proverbial packed bags and sent their children to Israel, the United States or England. In East Germany, only a few hundred Jews were left in small Jewish communities, as most had fled to the West in the winter of 1952–53 as a result of the anti-Semitic atmosphere under late Stalinism.

I was in graduate school at Columbia University and had just come from a class on German Jewish history when my mother called from Germany with the news about the fall of the wall on November 9, 1989. After having survived the Holocaust, she was among the German Jews who had fled to West Germany from East Germany in 1953, and although she was reserved about the news, she could now visit her hometown of Dresden again.

Like most other German Jews, I thought: Was there really no other day they could have brought down the wall besides the anniversary of Kristallnacht? Which by the way also happened to be the day when the first German Republic was declared in 1918, and when Hitler failed in his Munich beer hall putsch in 1923. Add to it now the fall of the wall!

In Europe, no one knew what a future Germany would look like. Margaret Thatcher feared it just as much as the German Jews did. The writer Günter Grass and other left-wing intellectuals thought that two democratic Germanys would be better than one. But in the end there was no other option but unification. On October 3, 1990, East Germany was swallowed by its bigger, more democratic and more prosperous Western brother.

While German Jews were still worried, they suddenly realized that the fall of the wall was their lifesaver. With the breakdown of communism and ultimately the Soviet Union, Soviet Jews were free to leave. More than 1 million left for Israel, others for the United States. But some wanted to stay in Europe, and over the course of the next two decades almost 200,000 opted for Germany. After all, Germany was the only country besides Israel that could not say no to Jews knocking at its doors.

For the small Jewish community of Weiden in Bavaria, where I grew up, this meant survival. By 1989, there were barely 30, mostly older, people left in the Jewish community, and they had just planned to merge with another small community about 20 miles away. There was no merger, and within a few years the Weiden community counted more than 300 Russian Jews. For the first time in decades, the community employed a rabbi and held regular Sabbath services. Bigger Jewish communities had similar stories to tell. Some grew to 2000 members from 80. Cities like Munich, Düsseldorf and Hannover count as many or even more Jews today than before 1933. In East Germany, where by 1989 a total of 350 Jews were registered in a few cities, many new and all-Russian Jewish communities were established.

During the past 25 years, Germany has been the fastest-growing Jewish community outside of Israel. Dozens of synagogues, community centers and schools were built; Reform, Conservative and Orthodox rabbinical seminaries have been established; Jewish museums, bookstores and university programs in Jewish studies continue to flourish. In recent years, more than 20,000 young Israelis, who settled in Berlin and developed their own cultural platforms in Hebrew, joined the Russian Jewish immigrants. They would not have come to a divided city.

While no one could have predicted this revival of Jewish life, one should still remain realistic with regard to the future. Most of the Russian Jews came without any significant connection to Judaism and were so busy with integrating into German society that little energy was left for participation in Jewish life. Many small Jewish communities are struggling again to form a minyan for Sabbath services and enough resources for their cultural programs. In addition, recent debates about both the right of circumcision and Israel’s wars brought to the surface the previously subcutaneous anti-Semitism, which had never fully disappeared.

With a distance of 25 years, German Jews today mostly embrace the fall of the wall. After all, it erased an authoritarian state that refused to take responsibility for Nazi crimes and to establish ties with the State of Israel. And, as an ultimate irony of history, the same day that marked the beginning of the destruction of German Jewry 51 years earlier now initiated its revival.

Michael Brenner is a professor of Jewish history and culture at Ludwig Maximilian University in Munich.