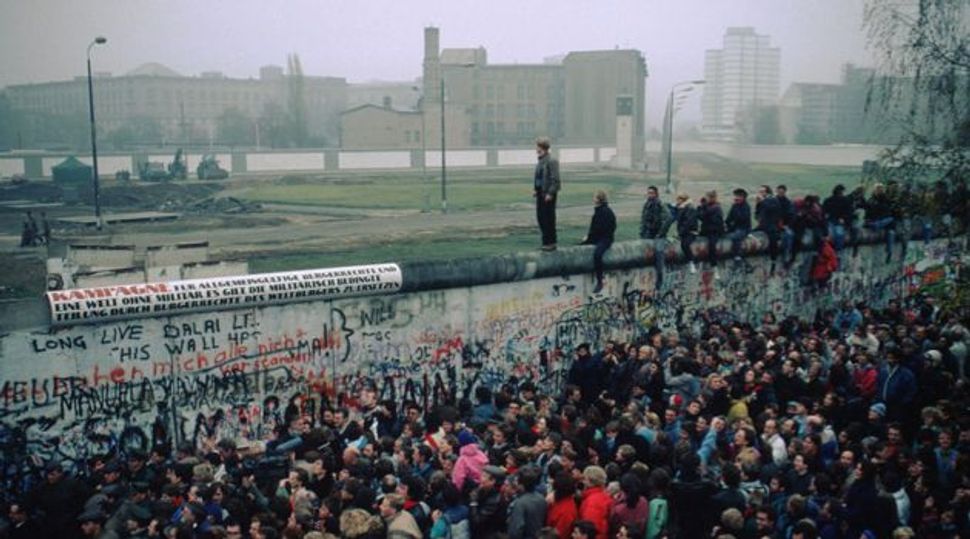 The Other Side: The fall of the Wall made Berlin whole again. Image by Getty Images

In the fall of 1972 I moved to Berlin from Frankfurt, Germany, to begin my studies at the Free University, which was founded in 1948 in the American zone. The upper-middle-class villas of this section of town had not been bombed during World War II; they had once been owned by well-to-do Jews who had perished. Space was available. Berlin’s established university was located in the city’s center in the Soviet zone, and obviously, the allies did not regard that institution as “free” — the Cold War was on.

Moreover, the Eastern part of the city seemed far away. Berlin had gained a new city center around the Kurfürstendamm, and in regard to the former owners of the buildings where I studied, no questions were asked. My Berlin was West Berlin, and it was a new creation, severing itself from its past. It was a city that had no old center, a city with lakes and the green spaces of suburbia. It was a truncated city that was somehow trying to be whole by forgetting its past.

It was easy to remain in such a state of amnesia. West Berlin’s history seemed to begin after World War II, and the buildings that dated from the Nazi period could easily be ignored. Moreover, it was not really Germany. People living in West Berlin had a special passport and their own legal system. There was no German army: West Berlin was a “special political unit.” It was an island, to be entered by non-German planes or by special highways that lead through a country that did not really exist. The name of this nonexistent country changed constantly: from the “Eastern zone,” to the “so-called German Democratic Republic,” to the GDR.

West Berlin, in turn, existed, but barely. It had hardly any industry or business, and was kept alive by the allies and the government of the Federal Republic of Germany. It was a city of older people who did not want or were not able to move, and younger people who moved there to study, or to avoid the draft. For them, West Berlin was not a place of postwar restoration, it was a left-leaning paradise of youth culture and cheap living. Beyond the Berlin Wall, there was the other half that declared itself whole. It was Berlin, capital of the GDR, the major city of a country that did not exist for the West. It was to be the model of successful socialism. While West Berlin tried to forget Berlin’s past, the Capital of the GDR (called East Berlin by the West) owned most of the former Berlin’s historic sites; its buildings pocked by bullet wounds and cannon scars. For the East, the leftist youth of the West was simply capitalist decadence.

In 1972 there were about 20,000 Jews living in West Germany. The community was hopelessly elderly; the group of Jewish students was small. West Berlin, however, had the largest Jewish community in Germany, and its largest Jewish student population. Besides young Jews who grew up there, there were Jews from elsewhere in Germany. One could easily find places to study, enjoy a liberal climate and leave Germany without really leaving it.

Moreover, West Berlin had something unusual to offer. There were Jews from Eastern European countries who found themselves in Germany after liberation from the camps, but there was also a small number of German Jews who had survived in hiding or who returned to Berlin after the war. This is were I encountered German Jews for the first time. Across the wall, in East Berlin, there were mostly German Jews. These were Jews who had fled to England or Palestine in the 1930s, who returned to East Germany out of political conviction. About 6000 Jews lived in West Berlin, while about 500 Jews were registered in the GDR, most of them in East Berlin. Other Jews were hesitant to register, but supported the community. East Berlin Rabbi Martin Riesenburger had already died before I arrived, but his sermons and speeches were still circulated in the monthly community newsletter. The East had the Jewish cemetery; the West had the rabbis and the cantors. For the West Berlin cantor Estrongo Nachama, the wall was open; he served the East Berlin community as well. The East had the largest synagogue, albeit in ruins; in its smaller one there was hardly a minyan.

In the early and mid-1970s I served as the leader of the West Berlin Jewish student organization. For the Jews of West Berlin, the Jews of East Berlin seemed to be a dying community, exotic members of a vanished tribe that still remembered a pre-WWII time. But for the leaders of the West Berlin community — in particular Heinz Galinski, then president of the Central Council of Jews in Germany — the demographics of the West did not look so great, either. It was Galinski who negotiated with the mayor of Berlin a deal to stem the declining numbers of Berlin Jewish citizens. Soviet Jews who had left their country would gain permission to settle in West Berlin, even if their first destination had been Israel or another European country. This was an exception to Germany’s laws regarding political asylum, and it lead to a small gain in the Jewish population. Nobody knew, however, what the future had in store.

After the fall of the Berlin Wall, in 1989, and German unification, Germany was forced to institute a quota for Jews emigrating from the former Soviet Union; 100,00 arrived. The Berlin Jewish community had to integrate an influx several times its original size. Today, most of the members of Berlin’s Jewish community have no personal relationship to the Holocaust, or to a prewar German-Jewish past. The old West Berlin community and the old East Berlin one are gone. Berlin’s new Jews speak Russian.

Liliane Weissberg is Christopher H. Browne Distinguished Professor in Arts and Science and Professor of German and Comparative Literature at the University of Pennsylvania.