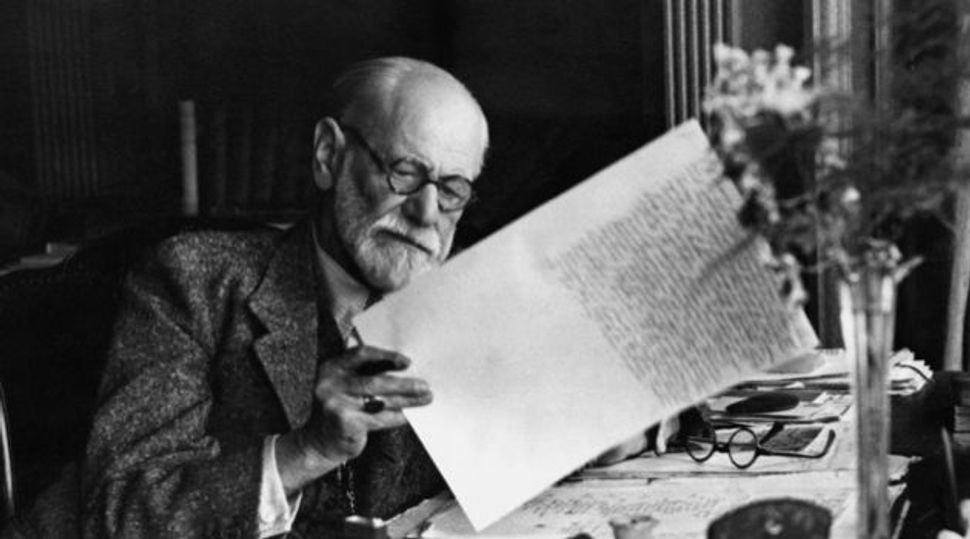 No More Freuds: The strain of Jewish identity that created our great thinkers from Hannah Arendt to the Marx Brothers is dying out. Image by Wikipedia

There’s a pair of new studies just out that sheds important light on the future of Judaism in America. One paints an alarming picture of a population headed for precipitous decline, but offers hope that certain measures can turn things around. The other suggests that the most hopeful measure actually might not offer much hope at all.

The first study is a reanalysis of the data in last year’s Pew Forum survey, the much-discussed “Portrait of Jewish Americans.” The authors are two leading scholars of American Jewish life, historian Jack Wertheimer and sociologist Steven M. Cohen. Their findings, published in the online journal Mosaic, focus mainly on worrisome family patterns of non-Orthodox Jews. Fewer marry, those who marry have fewer children and those with children give them less Jewish education. The likely result — the signs are already visible — is that each successively younger age cohort is smaller than the one before, less Jewishly attached and less likely in turn to give their children a strong sense of Jewish identity.

The numbers they cite are stark. Pew found a population of 1.8 million non-Orthodox Jews in the 50-to-69 age group, but just 1.2 million in the 30-to-49 age group. Those in the younger cohort are markedly less likely to join synagogues or Jewish organizations, donate to Jewish charities, marry other Jews or raise their children as Jews.

Their calculations don’t include the Orthodox community, they note parenthetically, “because its overall family patterns are so different.”

“If Pew tells us anything,” Wertheimer and Cohen write, “it is this: judged by their ability to retain the allegiance of their young, foster a commitment to the group life of Jews at home and abroad, or even meet the elementary needs of survival, American Jews, whatever stories they continue to tell about themselves, no longer constitute a great community.”

Their solution: First of all, get more kids into Jewish day schools, which are depicted as the one sure fix for dissolving Jewish identity. They call it “tragic that day schools at every level have become largely the preserve of Orthodox Jews, with only small percentages of others choosing an immersive Jewish education for their children.” They call on community leaders to “persuade more Jewish parents” to put their children in day schools. They urge easing school costs through philanthropic dollars and “by fighting for — rather than against — tax credits” for tuition. For teenagers and kids “whose parents are unable, or unwilling, to send them to day schools,” they urge greater support for summer camps, Israel trips and youth groups, as well as more Jewish programs on college campuses.

The authors don’t mention it, but tens of millions of philanthropic dollars have already been spent to expand day schooling over the past quarter-century, since the famous 1990 Jewish population survey raised the alarm over intermarriage. Here’s where our second study comes in. Published October 30, it shows how effectively day schooling is solving the problem. The answer: not so much.

The study, “A Census of Jewish Day Schools in the United States 2013-2014,” shows that day schools are booming, but the growth is entirely within the ultra-Orthodox or Haredi community. Modern Orthodox schools are just holding their own. Non-Orthodox schools are declining, despite gobs of philanthropic money. The Jews they’re supposed to save apparently don’t want to be saved.

The census is the fourth conducted since 1998 by day school expert Marvin Schick for the Avi Chai Foundation. Rare in Diaspora Jewish head-counts, it’s a literal census: Every Jewish day school in the United States was contacted directly and asked for enrollment numbers, grade by grade.

The first census in 1998 had counted 676 day schools with a combined population of 184,333. That census found 158 non-Orthodox schools with 36,897 students enrolled. That represented 20% of all day school students.

In other words, non-Orthodox day schools — Solomon Schechter schools of Conservative Judaism, non-denominational community schools and Reform movement schools — have lost 3,062 students in the past 15 years, just over 8% of their enrollment. The Schechter schools in particular have seen a catastrophic decline, dropping from 63 schools with 17,563 students in 1998 to 39 schools with 9,718 students in 2013. Community schools have regained some of that ground but not all of it, growing from about 15,000 to 20,000 students.

Orthodox day schools have grown in the same period from 518 schools with 147,436 students in 1998 to 712 schools with 220,914 students in 2013. But that’s not the whole story. Modern and Centrist Orthodoxy, both of which operate co-ed schools that prepare their students for college, have barely held their own; they’ve dropped from 47,000 students to 46,000 and gone from 26% to 18% of the total day school population.

By contrast, the two Haredi streams, Hasidic and so-called Yeshivish schools — known for extreme gender separation, distinctive clothing and devoting most of their school days to religious studies — have experienced explosive growth. Yeshivish schools have grown 59%, from 47,643 students to 75,681. Hasidic schools have more than doubled in population in the same period from 39,059 to 81,940. (Chabad-Lubavitch is considered a separate category, operating 80 schools with nearly 13,000 students, at least half of whom aren’t Hasidic but are drawn by Chabad outreach.)

It’s not that the Haredi streams are gaining popularity and attracting more Jews. Chabad, the Hasidic group that reaches out to non-Hasidic families, is the exception, so distinct that it’s listed as its own category with just 12,000 students, half of whom aren’t Hasidic. No, the streams of Judaism that are bursting at the seams are growing through high birthrates and strict self-segregation from everyone else.

How fast are they growing? Consider: Orthodox Jews comprise about 11% of the total American Jewish population of about 6 million, but they’re 27% of the 1 million children under 18. In New York City that figure is 60%. And nearly all that growth is in the black-hatted Hasidic and Yeshivish communities, not the Modern Orthodox.

The Pew numbers may leave some open questions about just how children of intermarriage define themselves. There are layers of Jewish cultural identification that aren’t easily detected in the survey questionnaires currently in use. Past surveys have too often searched for sparks of the Jewish soul with a pickaxe instead of a scalpel.

If the findings are to be believed, though, we could be at a historic turning point. Judaism probably isn’t at risk, but the worldly, liberal Jewry that emerged from the Enlightenment could be. The modern Jewish civilization that produced Freud and Einstein, Roth and Bellow, Dear Abby and Hannah Arendt, Sarah Bernhardt, Estee Lauder, Golda Meir and the Marx Brothers could turn out to be nothing more than a blip in history, a pause in the eternal saga of the Talmud and the ghetto.