Why the Nazis Are Still Winning Kristallnacht 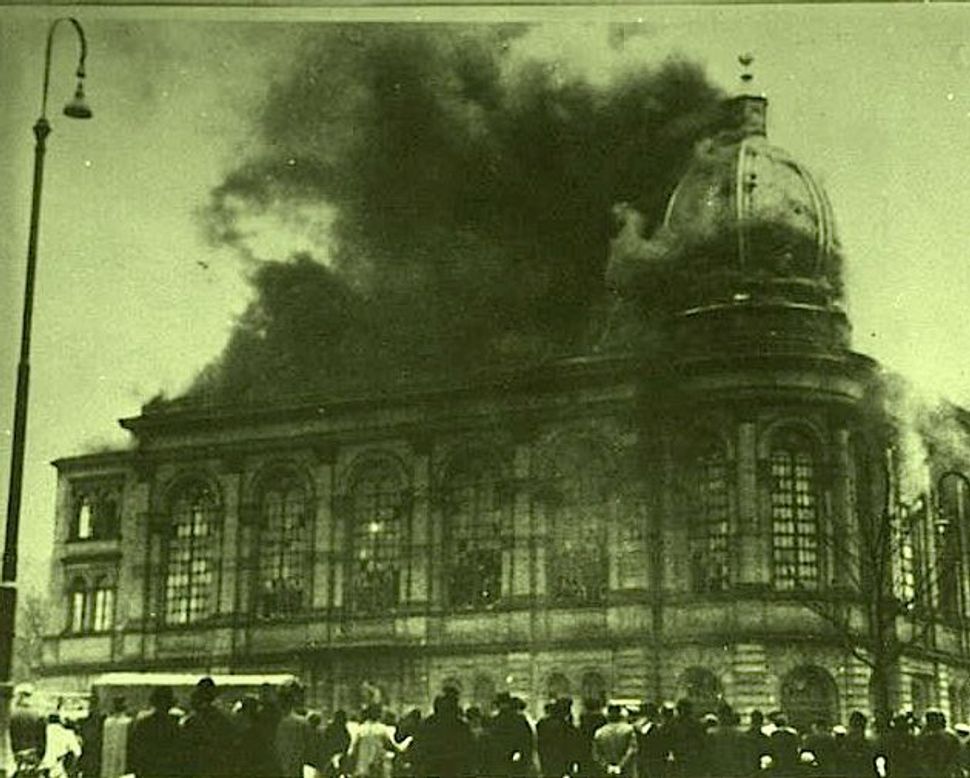 Wikimedia Commons
Broken and Burning: The main synagogue in Frankfurt-am-Main burns in the November pogrom, 1938.

The word Kristallnacht is poetic, alluring: A night of crystal — perhaps in today’s context we might think of Cristal champagne. The name the Nazis gave the violence of November 9 and 10, 1938, is redolent of European sophistication and yet it connotes barbarity. For that reason Raul Hilberg, and a number of other prominent historians, especially German ones, refuse the name, preferring to use variations on the phrase “November pogrom.”

And yet the Nazi name endures in the public imagination.

It’s only when we get to the English “night of broken glass” that we understand that something has been destroyed. And it’s only in the commemoration that we really understand the gap between the Nazi-issued signifier and the violent signified that was perpetrated by the S.A. (Sturmabteilung, storm troops) and the S.S. (Schutzstaffel, special police), with the participation of many ordinary Germans.

The salient facts. In Paris, November 7, 1938 Herschel Grynszpan — outraged by diplomatic chicanery that would relegate his German-resident Polish parents to illegal, stateless, Jewish refugees — shot a minor functionary at the German embassy, Ernst vom Rath. Not held back by any obvious diplomatic necessity (such as the need for the 1936 Berlin Olympics to run smoothly) the Nazis escalated the situation by promoting vom Rath on his death bed and sending Hitler’s personal physician to treat him. Vom Rath’s death was condemned by Hitler and Goebbels as the result of Jewish action and a loose plan of national (for both Germany and Austria since this was after the Anschluss) incitement and focused violence was discussed.

The November 9 date was no accident. It commemorated the failed 1923 Nazi putsch and was celebrated by a gathering of the Nazi Party faithful. Between the afternoon of November 9 and the morning of November 11 1938, 30,000 Jewish men aged 16-60 sent to camps at Dachau, Buchenwald and Sachsenhausen. And the equivalent of billions of dollars of damage to Jewish property stood smoldering or scattered on the floor as broken store and synagogue windows. Damage that the German government insisted that Jews pay for.

Until recently most sources noted that 91 Jews were killed on those days. It’s a sobering number but it’s about the same number as those killed in a 2013 Oklahoma tornado, not so startling in the context of the Holocaust. Until we realize that the number is a Nazi figure, officially promulgated and widely accepted for over half a century. It’s still the figure provided on the Kristallnacht wikipedia page. But Richard J. Evans cites several German scholarly sources in his 2005 “The Third Reich in Power” in his attempts to approximate an accurate figure:

The true number will probably never be known, but it was certainly many times greater, above all when the maltreatment of the Jewish men after they were arrested is taken into consideration, along with at least 300 suicides caused by the despair it engendered; deaths undoubtedly ran into the hundreds and probably numbered between one and two thousand.

So what can we do to deny the Nazis a propaganda victory in posterity, and properly commemorate the November pogrom?

Well, first we can make sure that we remember the events as accurately as possible and that they don’t get lost in the celebration of the end of the Berlin Wall on their 51st anniversary November 9, 1989. But to properly cement this pan-Germanic pogrom into the 21st century memory we need something else.

The dramatic dissonance between the Nazi representation of Kristallnacht and what we know of it would seem to be fertile ground for literature. And yet when I asked whether they knew of any successful literary representations of Kristallnacht — novels, poems or plays in English that dramatize it — Michael Berenbaum (a leading Holocaust scholar who was instrumental in setting up the United States Holocaust Memorial Museum) and Lawrence Langer (the foremost scholar of the Holocaust in the field of literature and testimony) who helped me compile a “Thinking Persons Guide to the Holocaust.” could think of none.

Charlie Chaplin’s “The Great Dictator” includes Kristallnacht in its sweeping satire of Adenoid Hynckel’s Tomania, but that’s the great exception. The list of books at Goodreads about Nazi Germany in fiction includes none. The bibliography about Kristallnacht at the USHMM includes none.

So why is there no literature about this? And by literature I mean something that is concerned with the mode and topics of representation, not a history book on the one hand (of which there several fine ones) or a fictional account that engages with the sensational events on the other. There are recent children’s books that do the latter, as well as some genre books, for example “A City of Broken Glass” by Rebecca Cantrell.

But neither of those genres really address the fascinating issues of what was happening in the German and Austrian Jewish populations at the time, as well as what was happening in the Nazi leadership. Or, at least not in English translation, a consideration of how the German people felt who — even if not participants — witnessed these attacks in their neighborhood and on the main streets of their cities and towns, large and small. 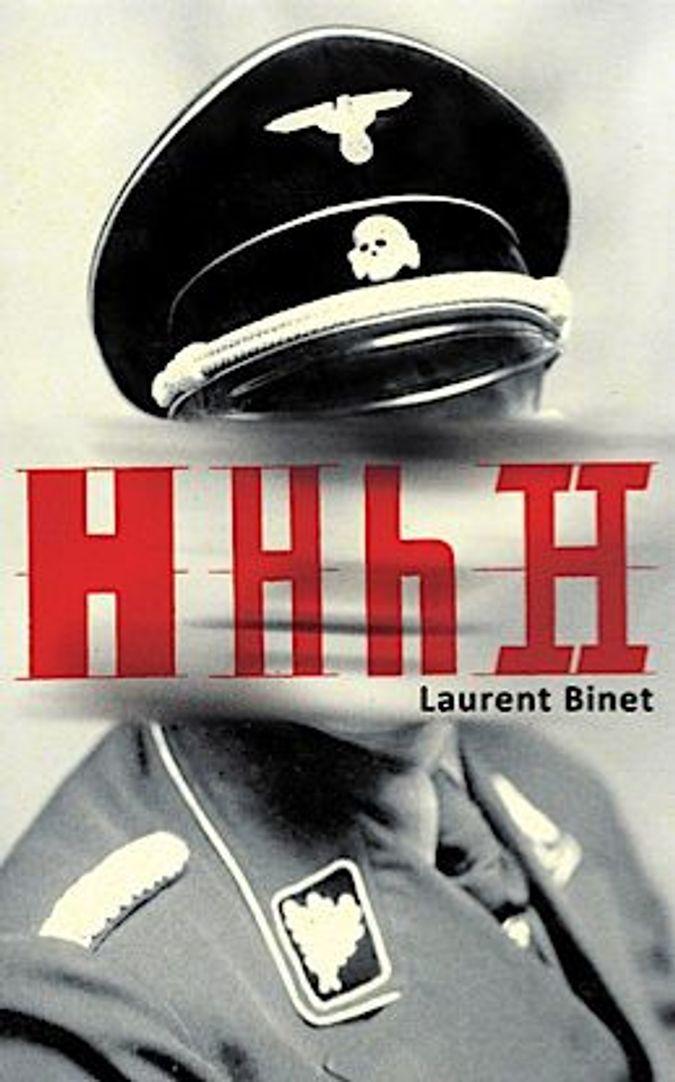 There are two main reasons for this dearth. And both of them are hinted at in one of the few literary books to address Kristallnacht directly. Laurent Binet’s 2012 “HHhH” (short for a wartime German saying “Himmlers Hirn heisst Heydrich,” Himmler’s brain is called Heydrich) is a tortured, fascinating telling of the assassination of Reinhard Heydrich. Binet (at least in Sam Taylor’s translation) is obsessed with the assassination, and weaves into his telling of the story of the assassination his own compulsive attempts to render the action accurately at the same time as giving the reader the real sense of each occasion. He writes at the end of Chapter 40 (his chapters are short): “No, it’s not invented! What would be the point of ‘inventing’ Nazism?”

The first point is that if you experienced Kristallnacht you can tell your own story but, unless you happen to be an excellent writer (such as Primo Levi) it might not be literary. If you weren’t there inventing a story seems almost obscene and you are left with few frames, the most obvious one is telling the story of piecing an account together, which is what Binet does and what Art Spiegelman famously did in “Maus.”

Point two follows on from this. Saul Friedlander, in his foreword to Uta Gerhardt and Thomas Karlauf’s “The Night of Broken Glass: Eyewitness Accounts of Kristallnacht,” explains that Kristallnacht seemed at the time “to be the height of Nazi barbarism.” But then, as history unfolded it became clear that “these events were but the faintest of preludes to what was about to happen to the Jews in Germany and in occupied Europe.”

It’s this dichotomy that leads to the perplexing position of Kristallnacht in the literary imagination. It’s an inflection point at which we see the barbaric worst of human nature in a modern industrialized country — indeed the country that had brought Europe consciousness of enlightenment. But it’s also overshadowed by the appalling tragedy of civilization that followed, where organized brutality was systematized and embedded as an aim of the regime, not just as a strategy to achieve those aims. In short, in hindsight, it appears a prelude.

Pogroms entail violence but not a program of violence. Hilberg differentiates a pogrom from “a destruction process.” The former “results in damage to property and injuries to people, and that is all. It does not call for further action.” But Kristallnacht showed that property and injuries were not enough. It showed the ideological Nazis that there needed to be a plan to dispose of the Jews of Europe. Such destruction could not be haphazard, as the events of the November pogroms had vast economic consequences. Germany expended much needed foreign currency to buy replacement glass from Belgium. And it showed the logistical Nazis that they needed to systematize the disposal away from the economically and socially messy streets of the Reich.

In this way it marked a turning point in Germany’s policy towards its Jews. It also marked the first time that a modern industrial state turned the apparatus of state onto an ethnic minority within its borders. Today’s Jewish, Muslim and Romany populations in Europe have reasons to worry, but state-sponsored violence appears not yet one of them. A canonical novel about such an inflection point would be an appropriate commemoration because it would provide us with the vocabulary to prevent its repetition.

There were still many choices to be made before the Nazi command came to a decision to implement the Final Solution and there were many factors independent of Kristallnacht that played a part in the Nazi extermination of the Jews in Europe, but as a symbolic event, and as an opportunity to see how domestic and foreign audiences would react to the outrage, it was a crucial two days.

Why the Nazis Are Still Winning Kristallnacht