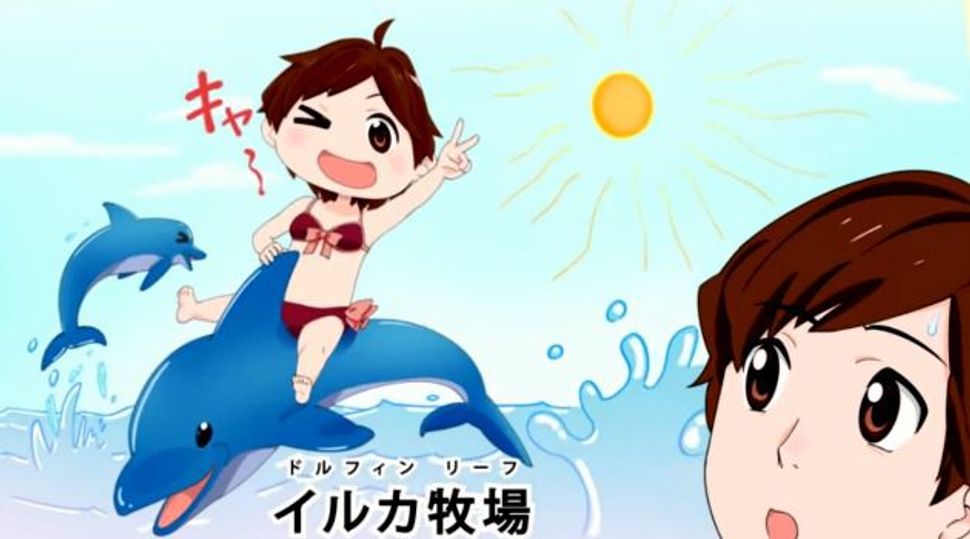 Well, here’s something you don’t see every day. The Israeli Embassy in Tokyo has launched an anime web series to encourage Japanese tourists to visit the Holy Land — and it’s kind of amazing.

“Israel, Like!” is an unusual blend of hasbara and manga — I hereby dub it “hasbaranga” — featuring two Japanese sisters, Saki and Noriki. As they tour different parts of Israel, they get to know each area’s special attractions.

The goal of this unexpected media initiative is to “use anime to reach the Japanese audience, especially youth, and display the Israel beyond the conflict,” Israel’s ambassador to Japan, Ruth Kahanoff, told Ynet. Ronen Medzini, the embassy’s spokesperson, added: “The main goal is to showcase the lighter and original aspects of Israeli society.”

The lighter aspects — check. The weirder aspects? Again, check. I actually found the inaugural episode (there will be seven total) strangely riveting. Allow me to walk you through some of the oddest moments.

This girl’s got her priorities right.

Really? You want all that oil poured on your back?

Under this heading: a mosque. Wait, what? Are there Muslims in this country or something?

5) Noriko: “There is a dolphin reef in the place called Eilat.”

Phew, back to the feel-good tourist stuff.

6) Noriko: “Let’s have some sister quality time! Shall we?”

If my sister said this to me, I’d burst out laughing and/or have her committed.

7) On the flight to Israel, all Saki’s fears about Israel resurface.

“Hey, isn’t it dangerous?” and “Isn’t this a desert country?”

8) When the plane lands, Saki asks: “Why are they clapping?” Noriko: “Many Israeli are cheerful people.”

Israel’s mascot — a white dove who carries around an olive branch — is a walking (bopping?) cliché. But his Star of David bandana is pretty rad.

A few seconds into his lecture on Israeli history, he interrupts himself: “What? You want to see what’s next in the story? Ok, then. See you later.”

11) Saki confesses that Israel is not what she expected.

“Many guys are good looking!”

12) At the hotel, Noriko greets the concierge with “Hello.” Saki is profoundly impressed.

“As always, when you speak English, you look really intelligent.”

13) Shalom-Chan is back! Time for more exposition.

“Official languages of Israel are Hebrew and Arabic.”

14) The girls hit the bar. Saki: “I had no image of Israeli wine, but it is actually delicious!”

“Noriko, let’s cut to the chase. Did you have a fight with your husband!?”

16) Saki was suspicious all along: “A trip of just you and me in such a short notice! And to Israel!”

17) Noriko reminisces about traveling with her husband in Israel. Saki is angry.

“Come on, wasn’t this trip supposed to be fun all alone as sisters? I am just getting more interested in Israel…”

I am just getting more interested in these crazy-weird sisters. Next episode, please!