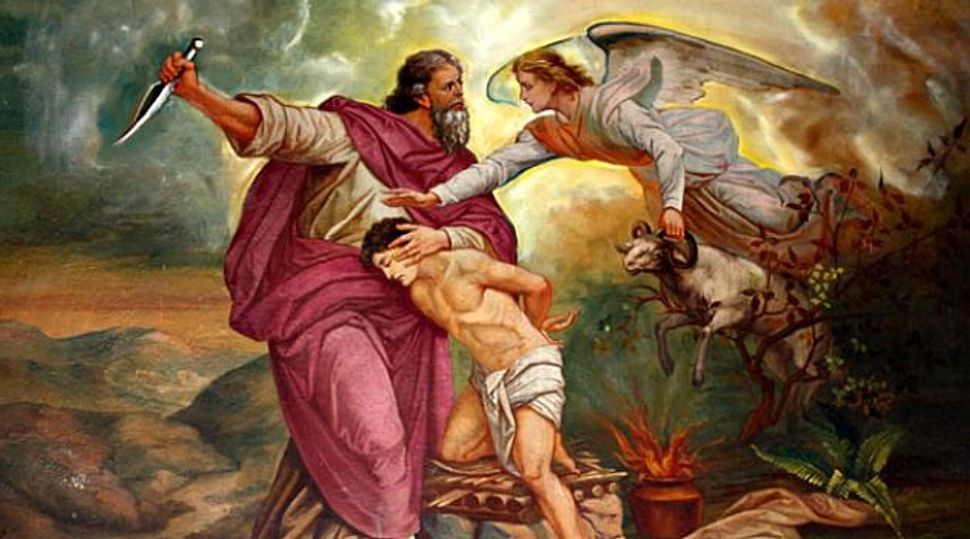 The Binding of Isaac

It’s a question that has puzzled believers, scholars and philosophers for millennia: Did Abraham really intend to kill his son Isaac?

On November 16, Jewish New Yorkers had a chance to decide the question once and for all, when Abraham was put on trial for child endangerment and attempted second-degree murder. Perhaps unsurprisingly, they absolved the father of monotheism of any wrongdoing.

It was a celebrity court case like any other, complete with a packed courtroom, a much-adored defendant, two hotshot attorneys and a highly controversial verdict.

But unlike, say, the O.J. Simpson trial, case no. 5775 was argued in a synagogue, and the crime with which it concerned itself took place over 3,000 years ago.

The trial, held at the historic Reform Temple Emanu-El, was presided over by New York federal judge Alison J. Nathan, who admitted to “having some serious doubts about my jurisdiction here.” Over 1,300 (mostly Jewish) New Yorkers paid $36 for the privilege of serving on the jury to judge their forbear.

Alan Dershowitz, the celebrated and bombastic Harvard law professor, won an acquittal for his client, Abraham, despite a strong prosecution by former Governor Eliot Spitzer, who represented the people of New York.

To convict a defendant of second-degree murder, the prosecution needs to show that the defendant clearly intended to kill, and engaged in conduct necessary to carry out the crime. In Spitzer’s view, Abraham clearly met both of these requirements.

He prepared his instruments of death and whisked his son into the wilderness, “in order,” Spitzer said, “that the act wouldn’t be seen by anyone.”

Abraham had three long days of journeying during which he could have called off the murder, but he didn’t. Nor did he hesitate to lie to his son about the upcoming offering, telling him that “God will provide the sheep for the burnt offering.” He bound his son to the altar and had “picked up the knife to slay his son,” in the Torah’s words. What more proof do we need that Abraham was about to kill Isaac?

Sure, at the last moment the murder was averted by an angel’s cry from heaven, but Abraham’s intentions were clear, Spitzer said.

The divine command complicates the story, however. If God ordered Abraham to kill his son, was he not simply being a faithful servant to the creator of the world and the author of morality?

Spitzer dismissed these concerns as a “mundane defense.”

“’Voices told me to do it, God spoke to me’…Really?” Spitzer asked incredulously, to laughter. “So we have heard from too many defendants over the years.”

Perhaps Abraham invented the whole divine command story as a pretext for killing his son, and God never told him to kill Isaac. Alternatively, Spitzer argued, Old Abe did hear voices, and should plead not guilty by reason of insanity and be remanded to the care of the state.

Even if God did actually order Abraham to kill his son, why didn’t Abe argue with God as he did for the innocent residents of Sodom and Gomorrah?

Well, in most other cases, Abraham shows himself to be a selfish guy. He throws out his son and his concubine and allows his wife to be requisitioned by foreign rulers. “A family man this Abraham is not,” Spitzer said. “Perhaps some family counseling a few years back would have helped.”

Ultimately, Spitzer reminded the jury, motive is irrelevant to the verdict. If Abraham really did believe God had told him to kill his son, his sentence, not the verdict, should be more lenient.

“We might ask for a non-jail sentence and a mere 2,000 years of community service,” Spitzer said, “with the proviso that any future walks with Isaac be in the company of a court officer.”

Dershowitz, however, argued persuasively that Spitzer, his former law school student, had a confused reading of the text. God had already promised Abraham unequivocally that Isaac was to be a great nation, so Abraham must have been certain that God would stop the charade before Isaac died.

God and Abraham both knew that neither would actually condone the sacrifice of Isaac, Dershowitz said; they were simply engaging in a game of “theological chicken,” waiting to see who would blink first.

Spitzer also argued that the Bible’s supernatural account of Isaac’s birth shouldn’t be read literally: Sarah could never have given birth at 90.

This infuriated Dershowitz, who made an unsuccessful motion for a change of venue to an Orthodox synagogue, “where the Torah was written by the voice only of God and where the Midrash is taken seriously.”

“If I were arguing this in [the Orthodox] Park East Synagogue down the block, not only would I win, but they would kick him out,” he said, as the audience roared with laughter.

Spitzer didn’t mind striking his own comedic blows, though; he called Dershowitz “a magnificent attorney, a celebrity as well…the best and last defense for many well known — but guilty — defendants. But that cannot and should not persuade you to buy his books.”

Undeterred, Dershowitz used a post-trial panel to talk up his forthcoming book about Abraham, provisionally titled, “Abraham: The World’s First (But Certainly Not Last) Jewish Lawyer.”

When the ballots were counted, Abraham — and Dershowtiz — were vindicated, barely: 687 jurors voted to acquit Abe of attempted murder, versus 590 who voted to convict. The margin was higher for his acquittal on child endangerment (748 to 529).

And so Spitzer’s losing streak continues — he long since resigned from the governorship and recently lost an election for city comptroller.

But Spitzer remains a consummate politician. Before he stepped into a taxi, I asked Spitzer for his response to the verdict. “We had a wonderful morning of Talmudic discussion,” he said, smiling.

Despite the passage of time, the Binding of Isaac still has the power to stir up powerful emotions…and even voter fraud. As she exited the synagogue, one elderly attendee complained that the trial of Abraham was really a blasphemous suit against God; she unabashedly admitted to stuffing the ballot box with a few extra “not guilty” ballots in order to clear Abraham — and the Lord — of any wrongdoing.