Why Terror Is Different This Time 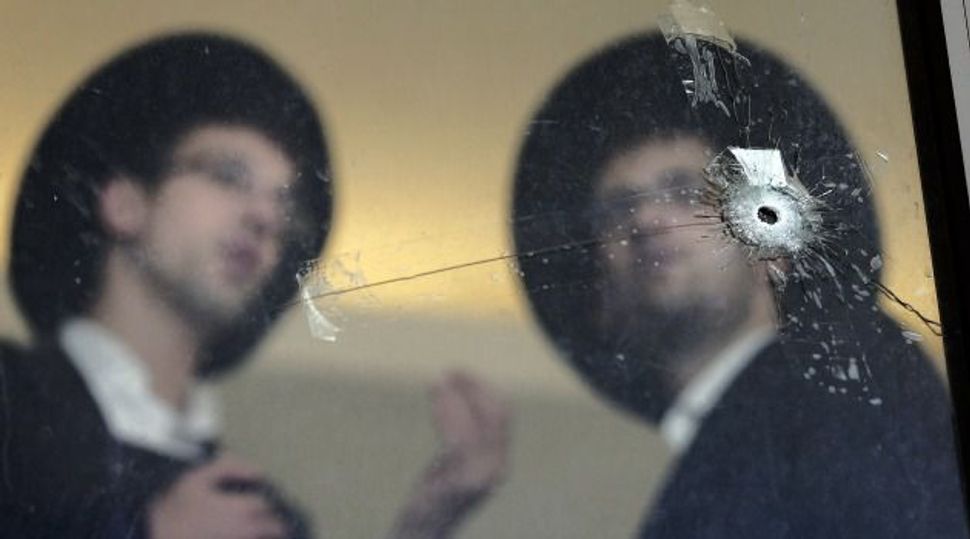 Somehow a line has been crossed. The November 18 attack inside a synagogue in the Har Nof neighborhood of Jerusalem feels different, cuts deeper, frightens me more and even angers me more. It is because it was an attack on Jews. In prayer.

Please don’t misunderstand. I’m not diminishing the pain and injustice caused by other attacks on innocent Israelis, on buses or in pizza parlors, in schools or even at Passover Seders. And I’m not forgetting that many innocent Palestinians have died in unjust ways, too, creating in each people a communal memory of victimhood that can be ironically, tragically parallel.

But to storm a synagogue during early morning prayers, to shoot and stab and hack men to death, elevates this crime to a new level of depravity. Even though the Forward has not published some of the most gruesome images, I must have glanced at some on social media because they remain fixed in my head: prayer books and prayer shawls splattered and stained with blood. Sacred objects, forever defiled. Prayer, interrupted.

I’ve never been to Kehillat Bnei Torah and as a woman, I would not be allowed in the central prayer space, but still I can easily imagine the scene just before the attack. The gentle hum of the opening psalms, coated in a morning sleepiness, rhythmic and awakening. The voices rising to chant out loud, then falling to whispers for the silent prayer, said standing, facing east.

For those who truly know how to pray — and I confess, this ability often eludes me — that is when we are at our most vulnerable. We are shortening the distance between ourselves and God, or the Divine, or whatever being or aspiration we wish to address. I suspect that the men who were murdered recited this prayer service with such frequency that it became a familiar, meditative chant, leaving them open and defenseless.

And then they were attacked from behind.

By targeting an Orthodox synagogue, the attackers knew exactly whom they would kill, and when. Blow up a bus or a restaurant and it’s possible that non-Jews would also lose life or limb, but this brazen slaughter was not that sort of indiscriminate terror. It was not directed at Israel alone; it was directed at Jews. It served no legitimate political purpose. It stabbed at the heart of the Jewish faith.

I’ve just returned from a reporting trip to Poland, and the Jerusalem attack felt eerily reminiscent of the pogroms I heard so much about, and the rank anti-Semitism that unfortunately persists today. But the main instigators of Jewish death in the last century were the Nazis and the communists afterwards, godless people who sought to suppress religious expression.

What’s so frightening about the Har Nof attack is what it might signal: a broader religious war between Jews and Muslims, fueled by the fear, largely unfounded, that Jews are about to “take over” the Temple Mount, the Noble Sanctuary, which the Muslims also deem sacred. Why these two people can’t share that space escapes me — I remember when, on my early visits to Israel, anyone could stroll along the plateau above the Western Wall and soak in its unparalled history.

Yet if separation can bring calm and order, then so be it. I respect that devout Muslims may want their own, pure space. I would hope that they would respect that Jews can enjoy the same privilege elsewhere.

The conceit of American pluralism, honored sometimes in the breach but honored nonetheless, is that people of one faith understand people of another. Clearly the Middle East is convulsed by the opposite reaction, beset by violence between religions and even between those who share the same faith.

No faithful people should have to endure the sight of their prayer objects defiled with blood and their holy places turned into fields of death. It was just as wrong when a deranged Baruch Goldstein massacred praying Muslims in Hebron 20 years ago. We Jews haven’t seen this happen to us for a while. That’s what has made this attack different, and yet so chillingly familiar.

Why Terror Is Different This Time