When I Drifted Off the Path 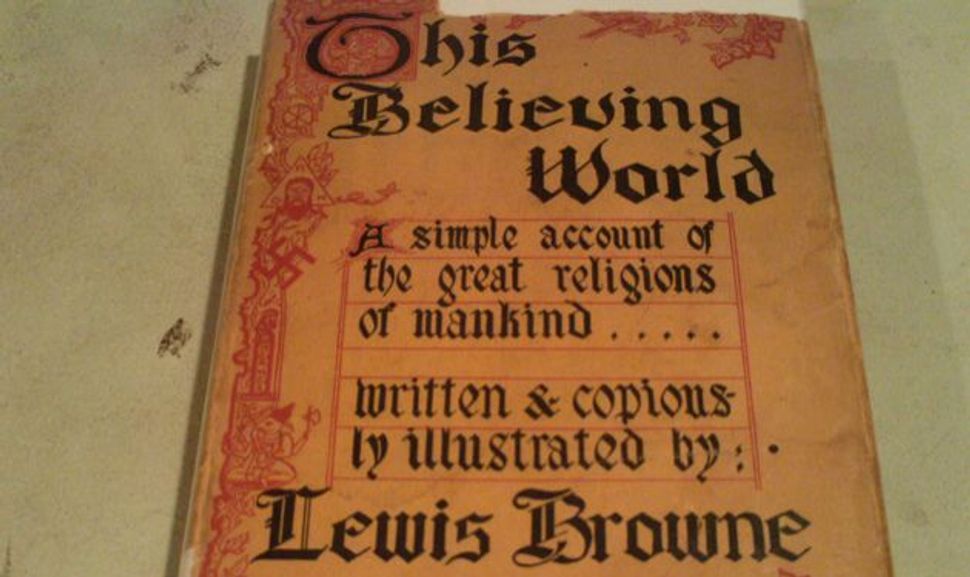 The Heresy: The book that almost changed Avi Shafran’s mind.

A cottage industry of memoirs detailing their writers’ journeys from restrictive “ultra-Orthodox” upbringings into the embrace of resplendent enlightenment and freedom has sprung up in recent years. Reading samples of the genre always reminds me of my own abandonment of the Jewish religious tradition in which I had been raised. I was 12.

My apostasy didn’t last. But some of the same things that pushed the Ortho-leavers in the directions they came to take bothered me greatly, too, at the time: scientific facts, social mores at radical odds with those of the observant Jewish world, non-Jew-centric world events and, more prosaic but no less discomfiting, things like dress codes, in my case it was a looming post-bar mitzvah black hat and jacket.

I would never presume to condemn anyone who has left the Orthodox way of life. Some who have fled their communities have recounted witnessing or experiencing harrowing abuse and, often, others’ denial of the crimes. Judaism requires us not to judge another until you have “reached his place” — that is to say, walked in his or her shoes. Outrages like those some have described would be powerful challenges to any sensitive soul. And so I feel no ill will toward the honest memoirists, only pain — both for their experiences and for what they are missing.

But enough about them. This is all about me.

I remember my first exposure to a resolutely secular perspective, my first brush with illumination. It took the form of a book. I was working summers in my uncle’s Jewish bookstore, which carried not only holy texts but also a broad assortment of literature with only tenuous connections to Jewishness. The store wasn’t a busy one, at least not as busy as my tween mind, and I took the opportunities that my job servicing customers afforded me to peruse some of the volumes. There were Jewish joke books and books about famous Jews. There were even copies of Betty Friedan’s “The Feminine Mystique” (erroneously shipped by a wholesaler from whom we had ordered Ernest van den Haag’s “The Jewish Mystique”).

But what captivated me most was a volume by Lewis Browne called “This Believing World,” a deliciously condescending look at religions, including Judaism, and their evolutions.

The book was just what a cynical kid with a contrarian streak would savor. I lapped it up and realized — or so I thought — that surely the Judaism in which I had been raised and schooled was but a contemporary sort of magical thinking, different from primitive belief systems (and from other religions) in its particulars, but not in its essence.

Christopher Hitchens and Richard Dawkins are Browne’s intellectual heirs (or reincarnations, perhaps, if one subscribes to such things). I imagine that, young or otherwise, uninformed people reading those contemporary writers’ atheistic fare today feel the same sort of heady supremacy that I felt as a 12-year-old enlightened intellectual.

I kept my discovery to myself. What, I reasoned, would have been the point of coming out, so to speak, at so delicate an age? Why not, I convinced myself, just wing it for the time being? Looking back now, I think that, deep down, I was probably more of an agnostic about Browneianism than I consciously admitted to myself. In any event, I soon enough came to entertain grave doubts about some of the ostensible truths my unholy book had offered.

My parents did not overly shelter me. The public library was my intellectual playground, and I played there often. But my diet of books on science and philosophy and psychology (leavened by more novels than I care to recall and by a steady fare of Mad Magazine) was augmented by other books, books that presented a view of history, science and life, based on Jewish tradition. And by my parents’ example, and by that of at least some of my Jewish day school religious teachers. And by meeting religiously observant Jews who truly lived their beliefs. Most of all, though, by doing some good, hard thinking of my own.

I thought about the world, and realized that the vastness of the universe didn’t have to mean that our niche of the cosmos was negligible. Rather, it could be a means of fostering the realization — against humanity’s proclivity to see itself as omnipotent and invincible — that we are but a tiny part of an unimaginably powerful God’s creation.

I realized that the new physics presented a picture more evocative of mysticism than of Newtonian Tinkertoys; that evolution of one species into another is a fascinating idea, but not an obviation of a divine creator; that the mystery of consciousness remained unexplained, and likely unexplainable, by the scientific method. Ditto for the Big Bang, not to mention what engendered it. (I have kept up a keen interest in the sciences since, and have found nothing in legitimate scientific data to challenge my Jewish belief in any way.)

I thought about world history and how no matter how wise and developed some civilizations may have been, the Jewish one was what guided an animistic, polytheistic and murderous world toward monotheism and attendant concepts like law, spirituality, reason and peace.

I thought about the baffling preponderance of Jews among any list one might make of personalities who changed the world, or who most benefitted mankind (that, a main theme of the aforementioned book by Ernest Van den Haag). And about the equally astounding and inexplicable preponderance of anti-Semitism – across both the centuries and the continents, in variegated forms with nothing in common but their hatred of Jews. And about how our religious heritage is still valued and lived today, and how our people, even after being repeatedly decimated, has not only survived but thrived, even returning, at least in part, to our ancestral home.

And most of all, I thought, long and hard, about Judaism’s foundational belief, that the Torah, including its Oral Law component, was transmitted by God Himself to our ancestors at Sinai, through Moses. That thinking, aided by further reading and research, led me to conclude that, for all the similarities among religions, the Jewish claim really is singular. No other faith system has ever claimed a source in a mass revelation of the divine. It’s always a single figure making a claim, a Paul or a Muhammad or a Joseph Smith. And that’s because a mass revelation cannot be fabricated; all the revealed-to mass’s members have to agree on what they collectively experienced, or the claim of the event will be stillborn. The only claim of a mass revelation, and it could persevere only because it happened, is Sinai.

I came to recognize some other things, too. Like the uniqueness of the fact that some of the Torah’s laws are inherently self-defeating (like the laying fallow of all fields in the Holy Land every seventh year, or the convergence of all the nation’s men in Jerusalem thrice yearly — leaving the borders of the land unprotected), things that no man-made system of law would ever sanely propose. And the further anomaly of the Torah’s judgmental descriptions of its “heroes,” their faults as well as their strengths. Not to mention the coming to pass of the Torah’s predictions that the Jews will stray from the Torah and be exiled to land after land, yet maintain (or be forced to maintain) their identity, and that from exile they will eventually return to their ancestral home (a prediction yet to be fulfilled in toto, of course, but that is well on its way).

Each of those singularities, I concluded, might be (and has been) countered with a tailored-to-fit “explanation” to avoid the unthinkable-to-some conclusion that the Torah is true. But at some point, Occam’s razor must be wielded to cut through the confusion, paring down all the astounding oddities to that single explanation that Judaism, as it has existed for millennia, is true.

And so, even before I became a bar mitzvah, I had already come to regard “This Believing World” and the worldview it so eloquently promoted as something that, for all its glitter, wasn’t gold, or even precious in any way.

To be sure, over the decades since my brush with disbelief, I have been severely unimpressed with, at times outraged by, how some ostensibly religious Jews have behaved. But being observant of many, even most, of Judaism’s laws is no guarantee of being observant of them all. All of us, even us religious Jews, have personal flaws, some of us even personal demons — to which we may fall in battle. That indicts us, perhaps, but not Judaism.

With each passing year, though, I came to appreciate more deeply the true exemplars of Jewish observance I have met and known, great rabbis and simple Jews alike, and the truth of the collective Jewish religious tradition. And so I decided to believe, to slightly alter Tom Wolfe’s poignant phrase, the heresy of my own eyes.

When I Drifted Off the Path