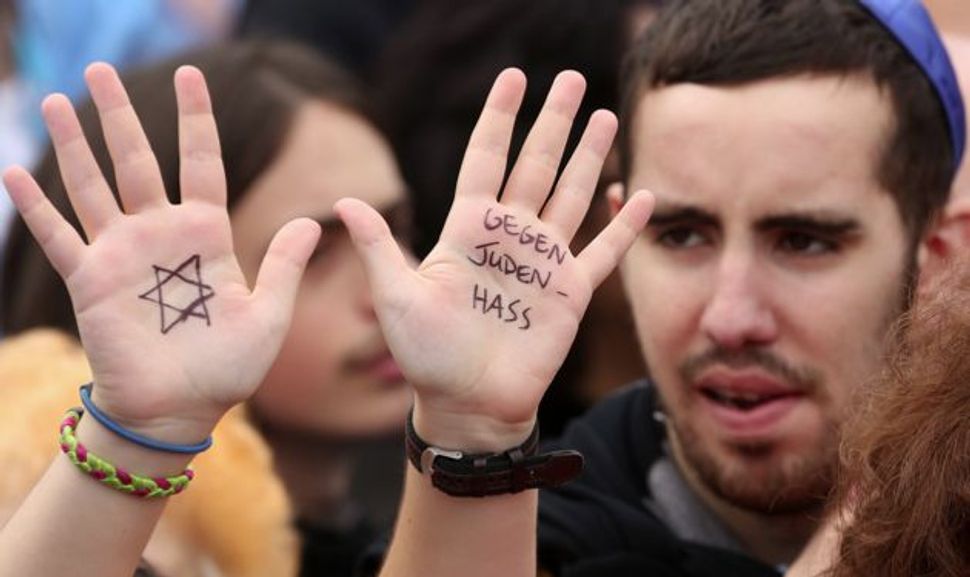 Fighting the Trend: A rally against anti-Semitism in Berlin this past September. Image by Getty Images

Ten years ago the Organization for Security and Cooperation in Europe convened a conference on European anti-Semitism. Last week it met to assess what had happened in the past decade. The signs are not good.

While a good part of the meeting was dedicated to official presentations by the participating nations, it was what one heard in the hallway over coffee that was most significant. At one point the White House delegation, of which I was part, met with representatives of an array of European Jewish communities. What we heard left me shaken.

We knew about the murders in the Brussels Jewish museum, the children gunned down on the Toulouse schoolyard, the fate of Ilan Halimi, a young French Jew who had been lured by a group of Muslims who then held him captive, tortured and eventually murdered him. We were aware of the violent demonstrations, assaults on synagogues, and the aggressive rhetoric — including “Jews to the gas” — that had occurred in various European cities. We anticipated that this would be our informants’ main concern.

While they certainly worried about this type of violence, what weighed upon them more was a “changed daily routine” that leaves them feeling “under threat.” Schools and Jewish institutions are under heavy guard. While this reassured some people, other parents described how, when they deposit their children at the Jewish schools and see the visibly armed guards protecting the site, rather than feeling reassured, they are reminded of the Toulouse schoolyard and the murdered children.

But in addition to the physical assault another attack is occurring. But for the fact that it does not take lives or break bones (no small thing), its long-term consequences may be more profound. Jews face an inner spiritual and psychological assault. Young people described being Jewish as having become a negative, a burden. “We are continuously on the defensive. It’s depressing.” Guy, a young Dutchman, recalled that not long ago a bunch of his Jewish friends gathered to celebrate his birthday. “What,” he asked us with an ironic smile, “do a group of young men talk about when they gather to drink beer and enjoy themselves? The Holocaust, anti-Semitism, and insecurity.”

In certain countries children who attend Jewish schools are warned — if not “forbidden” — from wearing anything that would single them out as Jews. No school insignias on the book bags, no school symbols on their jackets, no kippot. Nothing.

Many Jews feel abandoned by former allies. Jewish groups, both on campus and in the broader community, have long participated in coalitions of human rights organizations. “The problem is,” a young Belgian Jew observed, “that these human rights groups don’t consider Jews to be ‘victims.’ We may not face job discrimination. But we face violence.” Even after four Jews were murdered at the Brussels Jewish museum, some European human rights activists dismissed anti-Semitism as “only words” and of no real importance. Some of their colleagues even suggested that this all happened “because of Israel,” i.e. it was justified. “In short,” one young woman observed, “we have no allies.”

Why is this happening? There are multiple reasons. Much of the overt expressions of hostility come from a growing Muslim population. Their hostility towards Jews is directly linked to their hostility towards Israel. For them Jews, Israelis, and Zionists are all the same. Their hostility has long predated the Gaza conflict. But they are not the only source. There are right wing national parties, such as the Golden Dawn in Greece, which fall back on traditional hostility towards Jews. But there are also the European cultural elites, most of whom have remained decidedly silent as this scourge grows. Situated on the political left, they are critical of Israel and have conflated anti-Israel and anti-Semitic hostility. They seem unconcerned that segments of Europe are on the path to once again becoming Judenrein. One would think that but seventy years after the Holocaust the possibility would horrify them.

Some Jews, unsure that they have a “future” in Europe are leaving countries where generations of their families have lived. They head to Israel, London, the United States, and Canada. Their friends predict: “They will never come back. “

Many will probably stay put — emigrating is not an easy task — but will become “invisible Jews.” Young Jews repeatedly spoke of their contemporaries who “are going underground.” Students feel it increasingly uncomfortable to say “I’m Jewish.” They disengage from campus Jewish life.

Over the past two decades there has been a resurgence of Jewish life in much of Europe. Jewish cultural celebrations, schools, kindergartens, camps, and learning festivals have multiplied. Many are flourishing but, as one American who has lived in Germany for over thirty years observed, “if this atmosphere continues it will undo all these good things.” Recently her eleven-year-old daughter saw a man at a bus stop. His attire made it clear that he was a Jew. Turning to her mother, she announced: “He can’t walk around that way.” When her mother assured her that it was his right to wear whatever he wanted, the daughter insisted that he should not do it because “it’s not safe.”

When your young children understand that it is not safe for them to express who they are, the future is not bright.

Deborah E. Lipstadt is Dorot Professor of Modern Jewish and Holocaust Studies at Emory University. She chairs the US Holocaust Museum’s Committee on Anti-Semitism and State Sponsored Holocaust Denial. She was a member of the Presidential delegation to the OSCE Conference last week in Berlin.