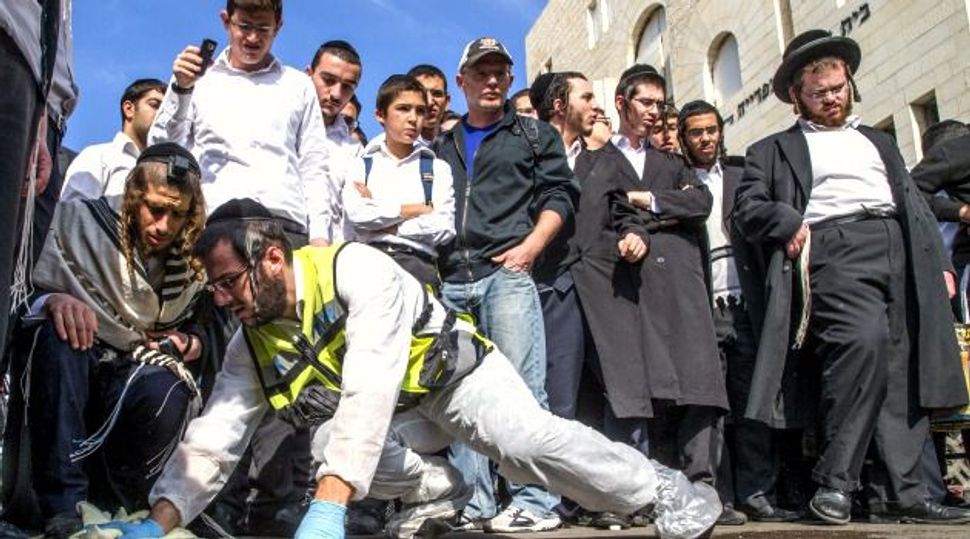 Four ultra-Orthodox Jews at prayer and one Druze policeman, murdered by two Palestinian young men armed with knives, axes and a gun. The heart grieves for the families of the victims and the suffering of the injured.

This past week’s slaughter was the latest development in an escalation of violence in Jerusalem that dates back to the summer, with the kidnapping and murder of three Israel youth in the West Bank, followed by the kidnapping and murder of a Palestinian teen in East Jerusalem. Most of the world ignored the fires burning in East Jerusalem until the flames spread across the Green Line. Two terrorist attacks on the city’s light rail, one attempted assassination of a right-wing activist, several attacks outside Jerusalem, and a horrific synagogue massacre later, the world has woken up to what is turning into a conflagration that threatens to engulf the entire city and beyond.

Following July’s gruesome murder of a Palestinian teenager in East Jerusalem, Israel caught the Israeli culprits and launched legal action against them. This is rule of law. Following this week’s attack, Israel quickly began meting out collective punishment against the families and communities of the Palestinian culprits, including demolishing homes, threatening action against family members, and blocking off neighborhoods. This is not rule of law; this is occupation law, imposed by means that are patently immoral and illegal under international law and under U.S. law (and that should be illegal under Israeli law), and that have proven ineffective and even counter-productive in fighting terrorism.

Some are suggesting that since this week’s heinous attack targeted a synagogue, the crisis in Jerusalem is now transmuting into a religious war. That framing is simplistic. Palestinians in East Jerusalem, unlike their West Bank and Gaza brethren, have always had means and opportunity to attack Israelis; they have done so rarely, and to the extent that such attacks have been rationalized, it has not been in religious terms. Notably, this most recent attack was committed by Palestinians who appear to be associated, at least loosely, not with Hamas but with the Popular Front for the Liberation of Palestine (PFLP), an avowedly secular terrorist organization.

And yet, irrational hatred of Jews offers an attractive framing for those who wish to deny the genuine underlying cause of the crisis. For these deniers of reality, the growing blaze in Jerusalem is convenient validation — even if false validation — of the narrative they have been peddling ferociously in recent years. This is the narrative that says: the problem isn’t occupation, or settlements, or even the campaign to alter the status quo on the Temple Mount; the real problem is Palestinian hatred of Jews and refusal to recognize Israel as a Jewish state.

Even if this past week’s terrorists deliberately sought to exploit the current crisis to catalyze a religious conflict, their effort need not succeed. In 1994, Israeli-American settler Baruch Goldstein massacred 29 Palestinians at prayer, and wounded another 125 Palestinians, in the Cave of the Patriarachs/Ibrahimi Mosque in Hebron. That heinous attack could have sparked a religious war, which may well have been Goldstein’s intent. Instead, Israelis and Palestinians alike rejected framing the attack in religious terms — framing that has little natural traction among either people — and a wider conflict was averted.

Fundamentally, the crisis in Jerusalem, like the broader Israeli-Palestinian conflict, is not grounded in religion. It is grounded in the absence of a political solution that will end nearly five decades of occupation — occupation that for Palestinians in East Jerusalem has become steadily unbearable, in terms of both the humiliations of daily life and the loss of a political horizon for a negotiated agreement. The Temple Mount/Haram al Sharif doubtless adds a potent religious element that has become more important, and problematic, as the site has increasingly become a focus and playground for the most irresponsible forces in Israeli society, some of whom seem eager to spark a religious war, and for their irresponsible counterparts on the Palestinian side and in the region.

Clearly, some people on both sides of this conflict reject a negotiated compromise to the Israeli-Palestinian conflict, preferring instead to view the conflict and its resolution in zero-sum terms. Clearly, some are eager to transform the conflict into an irresolvable religious war. The question today facing Israelis and Palestinians alike is: will they allow fanatics and ideologues to hijack their futures?