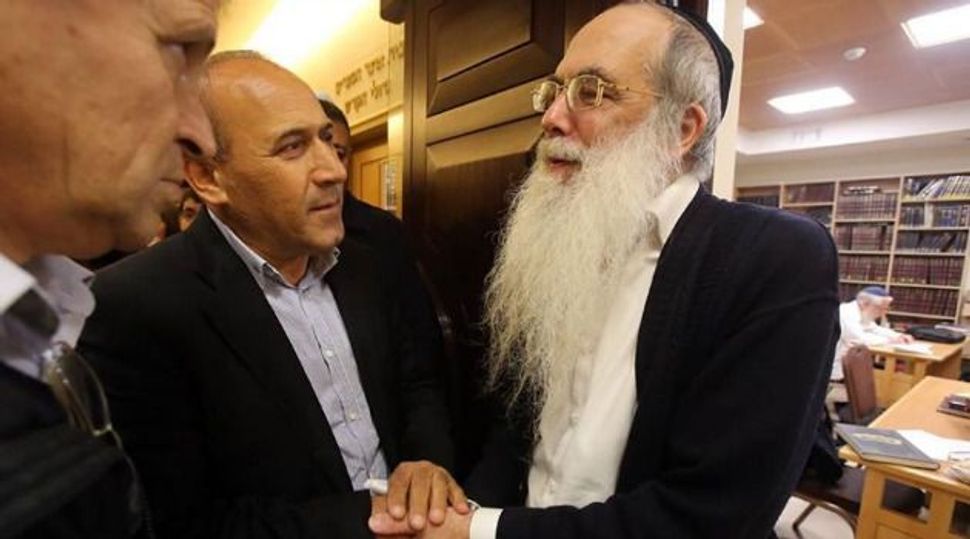 Mirrors covered with drapes, pictures stripped from the walls, and the out-of-style black-and-white modernism of North American Orthodox homes — the shiva (mourning) house of Rabbi Moshe Twersky of Har Nof was overcrowded and warm.

On the men’s side, the mourners were seated on low stools as prescribed by tradition. The condensed sea of black and white undulated in silence, waiting for a male relative to speak before they offered condolences. On the women’s side, Rabbi Twersky’s widow, Miriam — in heavily New York-accented but accurate Hebrew — spoke without pause of her late husband to a group of teary-eyed, similarly black-and-white clad women.

The tragedy and horror of Tuesday’s crime in which two Palestinian men, armed with a diverse weaponry, butchered Jews in the midst of prayer has left all those who follow the Israeli-Palestinian conflict asking: Just how religious is this conflict?

Experts are predicting and op-ed writers are pronouncing that this is a “turning point” in the conflict, shifting its gears into a more religious drive. Israel’s President, Reuven Rivlin, told reporters, “We don’t want to see ourselves as Jews being in a war with Islam — a religious war is a disaster from every perspective.” Ultra-nationalist Israeli Foreign Minister Avigdor Lieberman (unfairly) accused P.A. President Mahmoud Abbas of trying to turn the conflict into a religious war. The Israeli mainstream media, too, has raised this possibility. Nahum Barnea, Israel’s premier journalist for Yedioth Aharonoth stated dramatically that, “A thousand fighters will not be able to extinguish a fire with God as the fuse.” Ben Caspit, another prominent Israeli journalist, made the same point: “The true danger…is that the wave of terror will turn into a true religious war.”

But as I approached the Twersky’s shiva house in the rain-soaked evening, I saw an Arab man walking out the door with an entourage. His name was Ibrahaim Wassim, and he had come to pay his respects to the victims’ families. He was the deputy head of the Palestinian-Israeli village in the north called Baka el-Garbiyye. He told me that they had come, a delegation of Arab citizens of Israel, because he didn’t want “the extremists to drag us into this.” Har Nof’s residents, too, had sent busloads of community members to the Druze police officer’s funeral, the fifth victim of last Tuesday’s violence. The last thing Wassim said to me was, “We came in the rain and in difficult conditions because we have the same grandfather who commanded us to live together.”

Wassim’s visit was organized by Tag Meir, the same group that brought Jewish Israelis to the East Jerusalem mourning tent of the Abu Khdeir family this summer, when Muhammad Abu Khdeir was kidnapped and murdered soon after the same fate befell three Israeli boys from the Gush Etzion bloc. There, too, religious people demonstrated that they can share in each others’ losses.

These well-meaning people give us hope for a future coexistence. But there can be no such thing as coexistence when disparities of rights and power, such as there are in the West Bank and East Jerusalem, maintain their grip. It is in part for this reason that religion has long taken a back seat to the question of sovereignty, borders, and rights. East Jerusalem is aflame not because Islamists are enflaming it, but because life there has become unbearable. The two cousins who armed themselves, made their way to Har Nof early in the morning and then rushed into a synagogue screaming “Allahu Akbar” were allegedly members of the Popular Front for the Liberation of Palestine (PFLP), an organization that, since its founding, has been an avowedly secular organization. The “Allahu Akbar” is, as it has often been, a cultural affect to the drama of their act. No one has proved that these were religious men. Indeed, the only motive whirling around the rumor mill is that they were incensed by conflicting reports regarding the circumstances of the death of a Palestinian Egged bus driver who they believe may have been murdered by Israelis.

Consider the situation in East Jerusalem right now — not as an excuse for violence, but as a motivator for violence. For the last few weeks, there have been clashes in East Jerusalem between Israeli police and Palestinian youth not because the Israeli police officers are Jewish, but because there has been a massive “crackdown” — in the words of one Jerusalem Post opinion writer, “collective punishment”. This includes closures of main roads, arbitrary and excessive use of crowd dispersal methods (tear gas, rubber bullets), and the random spraying of ghastly “skunk” water among houses. Last week in Issawiyya, for example, the police blocked off three of the four main roads in and out of the neighborhood. In a protest against the police action, sixteen protestors were treated for excessive tear gas inhalation, and an 11-year-old boy was shot in the face by a rubber bullet and rushed to the hospital. These kinds of reactions are the rule, not the exception.

This is why comparing these attackers to ISIS, or even to Hamas, is so far off the mark. Aaron David Miller noted recently that most of Jerusalem’s Arab population “is not radicalized.” But it is home to a frustrated, overwhelmingly young and poor population that Benjamin Netanyahu doesn’t know how to deal with. When this all began last month, the head of the opposition, Isaac Herzog, had it right: “Jerusalem is burning and you [Netanyahu] are not taking any significant steps to stop the blaze. You are only adding fuel to the fire.”

This is not to say that there are no religious tensions in Jerusalem — there are. They center on Temple Mount, as always. There is, too, incitement on both sides, as well as lone wolves; the attempted assassination of Yehuda Glick by an East Jerusalem resident should not to be dismissed, and nor should the Jewish “price tag” attacks on churches and mosques, and nor should the synagogue that was found charred in Shoham only a few weeks ago. But these would be called hate crimes anywhere else — and usually a hate crime is an expression of something deeper: a craving for empowerment. When the Jerusalem municipality then demolishes the home of the attempted assassin, rendering a family of 17 homeless, they remind everyone what the conflict is really about: power and powerlessness.

And when Palestinians feel that not only their civil rights are being undermined (or revoked, as the case may be) but that their religious rights are also at risk — many Palestinians will tell you that they fear Al-Aqsa will go the way of the Tomb of the Patriarchs in Hebron and become segregated — it doesn’t mean that, in a moment, the fuse of religious fervor is lit. It just means that it also involves religious rights, as it always has.