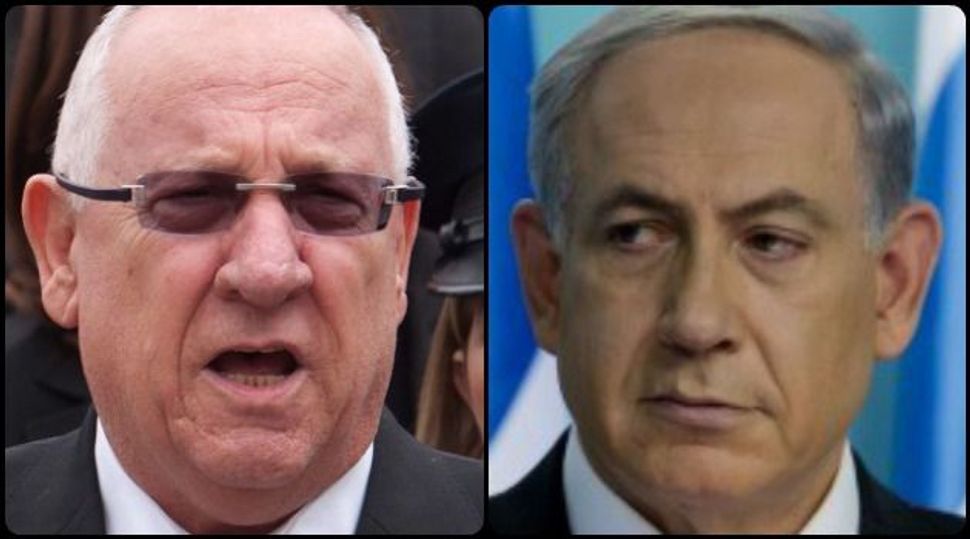 (JTA) Reuven Rivlin just did the one thing Israel’s president — a largely ceremonial post — doesn’t usually do: He publicly, and vehemently, opposed a specific bill endorsed by the government and Israeli Prime Minister Benjamin Netanyahu.

Addressing a conference in Eilat, Rivlin lambasted the controversial Nation-State Law, advanced this week by Israel’s Cabinet and which seeks to enshrine Israel’s Jewish character in law.

Supporters of the law say it merely places the two sides of Israel’s “Jewish and democratic” character on equal footing and reinforces the state’s Jewishness against its enemies. But the law’s opponents say it gives primacy to Israel’s Jewish side. They point to the absence of the word “equality” in the bill and note that the bill fails to guarantee collective rights to Israel’s minorities.

Rivlin made clear which side of the debate he’s on.

“Ladies and gentlemen, such a hierarchical approach, which places Jewishness before democracy, misses the great significance of the [Israeli] Declaration of Independence, which combined the two elements together without separating them,” he said. “This is the beating heart of the State of Israel, a state established on two solid foundations: nationhood on the one hand and democracy on the other. The removal of one will bring the whole building down.”

It’s not surprising that Rivlin opposes the bill; he’s long been a crusader for democratic and minority rights. But it is surprising that he came out against the government so publicly. The president’s job is to welcome dignitaries, represent the state at such functions as funerals, and guide the formation of a new government following elections.

The president is not a political position, per se, and he’s not supposed to get involved in legislative battles. Rivlin himself stressed that point in an interview with the Times of Israel’s David Horovitz before he was elected in June. He was responding to a question about his opposition to a Palestinian state.

“I won’t intervene in Knesset decisions,” he told Horovitz.”The president is a bridge to enable debate, to reduce tensions, to alleviate frictions.”

So why did he intervene here? A source in the president’s office, who wished to remain anonymous, said Rivlin sees this bill as not just any piece of proposed legislation but fears it will affect the core nature of Israel’s democracy.

“The President is committed serving the people of Israel, and as such will of course stand up on any issue that impacts upon their well-being and future,” the source wrote in an email.

The question of a Palestinian state, of course, also impacts Israel’s well-being and future — and it was the prime concern of Rivlin’s predecessor, Shimon Peres. As president, Peres constantly stressed the need for a two-state solution and broader regional reconciliation. The difference with Peres was that those were also the stated goals of the Netanyahu government, so there was no explicit disagreement.

The closest Peres came to explicitly opposing Netanyahu was on the question of whether to bomb Iran’s nuclear facilities. Peres told Israel’s Channel 2 in August 2012, as fears of a srike were heating up, that Israel would have to attack Iran only alongside the United States.

“We can delay the Iranian nuclear plan, but it is clear to us that we need to go with the United States,” Peres said. “President Barack Obama is determined to stop Iran and Israel cannot do it.”

The comments elicited a public debate, and members of Netanyahu’s Likud Party shot back at Peres.

Peres’ statements were “an unabashed and explicit attack on the official policy of the government of the State of Israel, which was elected by the people. The people did not elect the president,” Likud lawmaker Gilrad Erdan, then minister for environmental protection, told Army Radio the next day.

Rivlin’s statement has yet to draw such ire. Perhaps it’s because he’s also a member of the Likud party — whereas Peres once ran against Netanyahu for prime minister. Either way, it’s clear that even being Israel’s head of state doesn’t mean the president is always above the fray.