Not Afraid To Be a Girlie Girl 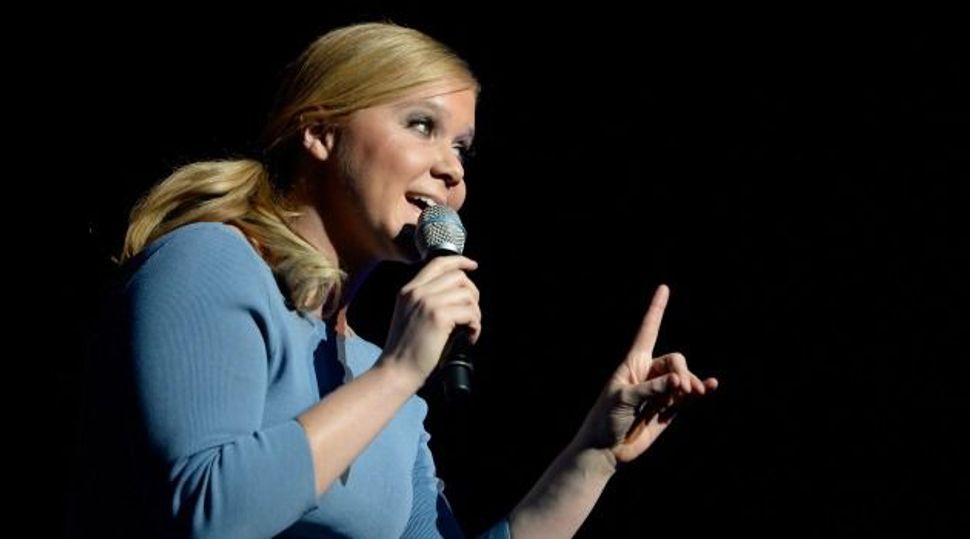 A few weeks ago I saw Amy Schumer, stand-up comedian and star of the sketch show “Inside Amy Schumer,” at Carnegie Hall. She was as hilarious as I had hoped, but the truth is, I didn’t really go to see her for the jokes. I went to feel part of a moment. I wanted to experience firsthand what it felt like to see a feminist comedian in a skirt and heels talk about being a woman today to a crowd of 2,000-plus laughing men and women at the storied venue. To me, that was worth the $54 seat up in the nosebleeds.

If I sound like a slightly nutty Schumer fan girl, well it’s probably because I am. Some of this can be chalked up to the fact that I really love her, and some of it is because of the communal symbolic victory I see in her ascent. For brassy Jewish women, Schumer isn’t just another blow to the idiotic question of whether women are funny, but proof of a tectonic shift in how people see us, and how we see ourselves. For Schumer, the fact that she is a JAP isn’t part of the joke. She isn’t the punch line. The world around her is.

It’s worth noting here that Schumer, who is half-Jewish, doesn’t self-identify as a JAP in her comedy. Really, I am using the term as a catch-all phrase to describe the type of woman who has traditionally been maligned in popular culture for traits that are usually associated with the feminine: gossipy (social), materialistic (cares about appearances) and whiny (expresses disappointment).

Schumer is certainly not the first female comedian to take on the JAP stereotype. In her earliest work, Joan Rivers pointed out the double standards in dating and how a woman could be either funny or sexy, but never both. Sarah Silverman’s done it, too, mostly by way of using a faux-naive entitled princess voice to deliver raunchy and provocative observations. The difference between those two ladies and Schumer is that where Rivers took to exposing our prejudices toward JAPS, and Silverman took to subverting those prejudices through a potty mouth and a tomboy persona, Schumer is exposing them by confidently occupying them, upspeak, glossy lips and all. And her success tells us it’s okay.

When Schumer is onstage or doing sketch comedy, she isn’t telling jokes about how the world sees her, like Rivers largely did, but about how she sees the world. This is what feminists call “reversing the male gaze.” She is so unapologetic about her femininity that she can sometimes come off as indifferent. But it is her lack of indigence, the half-smirks and loose shrugs, that give her observations such heft. What she’s telling us is that she isn’t going to waste any time trying to prove that talking about body image and her vagina matters, because it mattering is something she assumes you should understand before watching her show or her stand-up. If you don’t, well, shucks for you. Shrug.

This isn’t to say Schumer isn’t vulnerable, it’s just that that vulnerability isn’t a product of her fear that what a girly girl like her cares about or thinks might not be interesting. With this edge gone, she has more freedom to go deeper into the insecurities and absurdities endemic to the female experience today.

One of her best-known and funniest sketches features a group of friends who turn to immediate self-loathing in the face of a compliment.

“You dyed your hair! It looks amazing!” says one woman says.

“No, I tried to look like Kate Hudson and ended up looking like a golden retriever’s dingleberry,” her friend replies.

After a number of exchanges in this vein, a friend comes along and accepts a compliment on her jacket. “Thank you,” is her only reply. The rest of them then commit suicide.

Another favorite Schumer sketch is one in which a group of guys praise “cool” girls, the type who earn that title because they can hang like a dude.

“She was crazy hot.” one says. “She could recite all of ‘The Boondock Saints’ verbatim while rebuilding a deck.”

By the end of skit, after gushing about girls who like Xbox, sports and pizza, these guys realize that the kind of girl they seem to want is actually another guy, and so they decide to make out with one another.

Both of these skits work so well because Schumer’s starting point, before she leaps into the absurd, is the subjective experience of women. In one, she takes on the infuriating ways in which women treat themselves, and the other is about how men treat women, but neither betrays her commitment to the female point of view.

The fact is, women are tired of apologizing for being women. We’re tired of being told that we can’t be taken seriously because of the way we talk or the fact that we like fashion, pop music and doing crafts with our kids. We’re even more tired of trying to explain why our points of view matter, too. Schumer, in one of the most masterful elisions in feminist history, takes the fact that lady stuff matters for granted, even when in so much of the world it still doesn’t. The best part is, she’s got all us fans doing so, too.

Not Afraid To Be a Girlie Girl