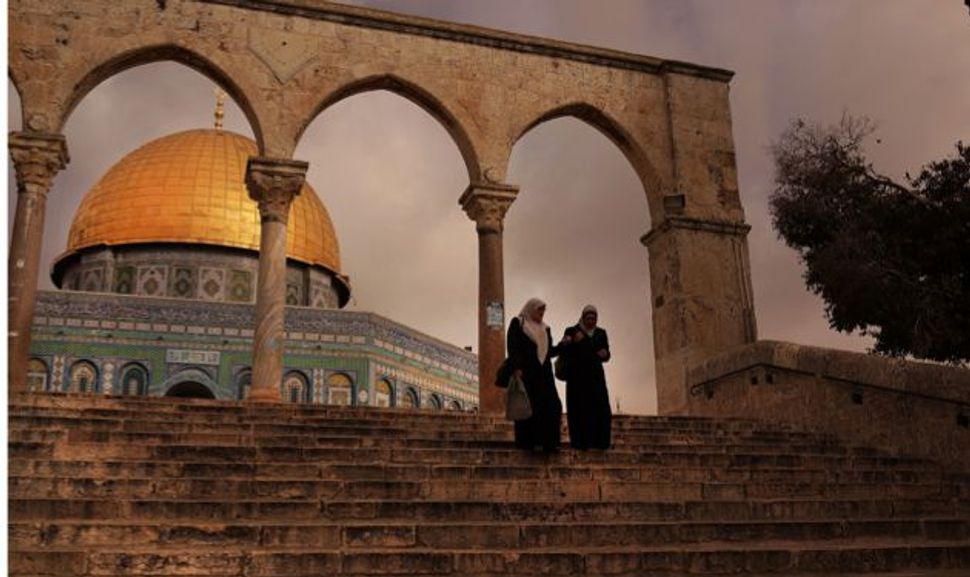 Site of Contention: What is the Noble Sanctuary to Muslims is the Temple Mount to Jews. Image by Getty Images

Muslims and Jews around the world are today facing a fearsome specter, that the Israeli-Palestinian conflict is increasingly turning into a war between our two religions. To prevent a global conflagration that would be a disaster for both faiths and the entire world, we must urgently create forums for Muslims and Jews to connect with each other, with each of us sharing basic facts about our own faith while hearing and internalizing what the Other has to say.

One major problem is that too many of us are almost completely ignorant of the beliefs of the other religion — nowhere more so than on questions related to the meaning of Jerusalem/Al Quds in Islam and Judaism. I came face to face with this reality during a trip I made to Indonesia earlier this month together with my dear friend Imam Shamsi Ali, an Indonesian-born New York imam. There, in the country with the largest Muslim population anywhere in the world, I addressed elite audiences composed of religious scholars, political leaders and university students where I was repeatedly peppered with questions about how I as a Jewish religious leader, could tolerate alleged Israeli repression of Muslim worshippers at the Al-Aqsa Mosque in Jerusalem.

I responded by saying that Jews should certainly acknowledge that Al-Aqsa and the adjacent Dome of the Rock — together revered by Muslims as Haram Al-Sharif or the Noble Sanctuary from which Prophet Muhammad ascended directly to heaven — is one of the holiest shrines in Islam and must be respected as such. By the same token, I said, Muslims need to come to grips with the fact that the hilltop upon which the two sacred mosques stand, known to Jews as the Temple Mount and is the holiest site in Judaism; the place where both the First Temple and Second Temple stood before being destroyed by the Babylonians and Romans respectively.

The response of my interlocutors to what I said about the ancient Jewish Temples was befuddlement. They had themselves never heard about any Jewish connection to the Temple Mount, they told me. All they knew was that evil Zionists had taken over Palestine and are now plotting to destroy Al-Aqsa. When I responded that demonizing Zionism is the equivalent of besmirching Judaism, since our love for and connection to Jerusalem and the Land of Israel stands at the very heart of our faith, it was clear to me that many of my listeners were hearing this perspective for the first time in their lives. I am not sanguine that I convinced all of them, but at least I was able to share a little heard Jewish perspective in a critically important Muslim country.

If we are to interrupt a deteriorating dynamic in which the Israel-Palestinian conflict is morphing before our eyes from a political struggle between two nationalist movements into a religious war, we all have a responsibility to step out of our comfort zones and speak forthrightly to our own community and to the Other about the dangers of exclusivism and extremism, especially with regard to the Temple Mount.

In that regard, I was disappointed in the comments by IDF Chief Rabbi Raffi Peretz last week that that the Temple Mount has no religious significance to Muslims except for the Al Aqsa mosque, that “90 percent (of Arabs) don’t even know what is written in Quran,” and that Quranic parable of Mohammed’s flight to the Haram Al-Sharif and his ascension from there to heaven is merely “a fable.” Rabbi Peretz’s comments are replete with error, starting with his claim that Muslims venerate only Al-Aqsa Mosque; when in fact the entire Temple Mount, together with Al-Aqsa is considered part of the Haram Al-Sharif and sacred to Muslims. In his comments, Rabbi Peretz makes the common mistake by people on both sides of the divide of believing that he knows the faith of the Other better than they do; just as many Muslims are mistaken in asserting that Judaism and Zionism can be separated.

Indeed, even many Jews who acknowledge the sacredness of the entire Temple Mount to Muslims support the demand of some members of Knesset to allow organized Jewish prayer there (something that until now has been by prescribed by rabbinical authorities for fear of inadvertently stepping on the site of the Temple — the Holy of Holies) by arguing that Al-Aqsa is only the third holiest site in Islam, whereas the Temple Mount is the holiest site for Jews. That may be true, but third holiest is quite holy enough, and, as I have witnessed in many Muslim countries I have visited, including those, like Indonesia, which are non-Arab and far from Israel, Muslims universally venerate Al-Aqsa, and believe that they are duty bound to defend it.

At the same time, Muslims in countries around the world need to publicly acknowledge the transcendent meaning of the Temple Mount to Jews and come to grips with the fact that Judaism cannot exist without its connection to Jerusalem and the Land of Israel. As that perspective seems largely unknown in many parts of the Muslim world, Jewish leaders need to travel to as many of those countries as possible to deliver that message in tandem with courageous Muslim leaders like Imam Ali.

Quite clearly, we will never resolve the Israeli-Palestinian conflict without simultaneously bridging the chasm of mutual misunderstanding, fear and yes, hatred, that separates Muslims and Jews worldwide. On the other hand, let us not overlook that during the past seven years, as Israeli-Palestinian relations have steadily deteriorated, Jews and Muslims have indeed been coming together in unprecedented fashion under the aegis of Foundation for Ethnic Understanding and collaborators in many parts of the world. During our annual Weekend of Twinning, thousands of Muslims and Jews have joined together to hold hundreds of Muslim-Jewish festive, educational and social service events in more than 30 countries on six continents.

The growth of this international Muslim-Jewish movement shows that there are many Muslims and Jews out there prepared to take our collective destiny directly into our own hands by reaching across the barricades and encountering each other face to face. When we do that, we discover that the person on the other side of the chasm is a human being very much like oneself; and that our two faiths share numerous commonalities in our rituals, traditions and mindsets, literally going back to our common Patriarch Abraham/Ibrahim.

So we have made a promising start, yet the ominous trends toward religious conflict show that all of us must urgently double, triple and quadruple our efforts to break down the walls separating Muslims and Jews worldwide. Listening to each other’s perspectives can sometimes be frustrating, but it is far preferable to mass violence. For the sake of our children and the future of the world, Jews and Muslims of conscience and clarity of vision must urgently summon the strength and courage to put aside self-righteousness, fear and mistrust, and reach out to each other.

Marc Schneier is president of the Foundation for Ethnic Understanding, and co-author with Imam Shamsi Ali of “Sons of Abraham: A Candid Conversation About the Issues that Divide and Unite Muslims and Jews” (Beacon Press, 2014).