Coming to Terms With Death of the Jewish Mainstream 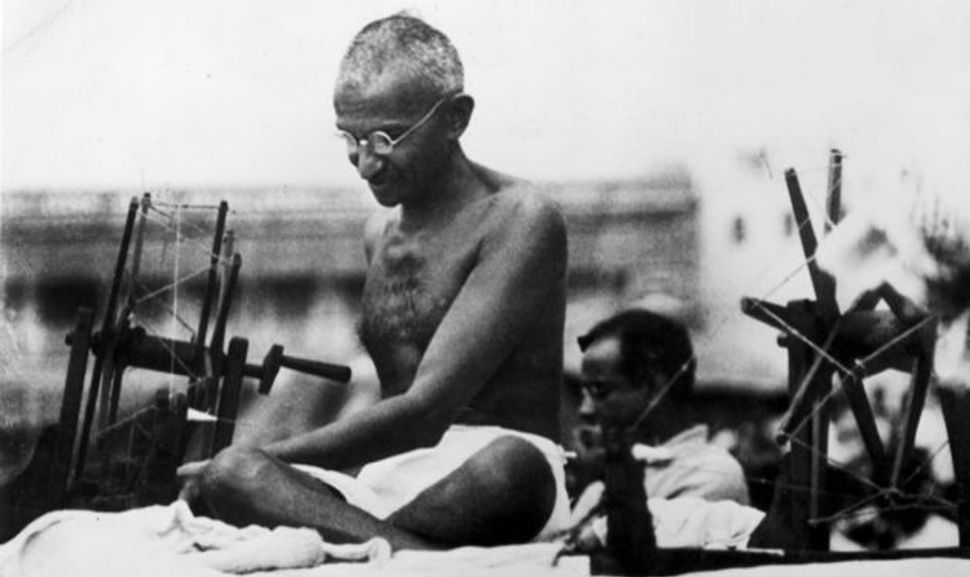 Being the Change: What did Gandhi really say about our ability to make a difference in the world? Image by Getty Images

Reading a Jewish newspaper — and writing for one — is often an exercise in masochism. Of course, the Forward has inspiring pieces on the gefilte fish revival and the first female-majority Forward 50.

But when you look at the “hard news” and follow the trend lines, it’s easy to feel despair.

If you’re a progressive, Israel’s “Jewish State” law is but the latest in a long line of anti-democratic, nativist and thuggish actions by the present government, a government subsidized by American billionaires, one of whom has recently opined that Israel need not remain a democracy. He’s already put his money where his mouth is.

And if you’re a conservative, you likely see Israel as increasingly demonized on the world stage: On college campuses and in European parliaments, the Palestinian narrative seems to be winning.

Meanwhile, here at home, mainstream Jewish denominations are shrinking, like those of Christianity, and no one has a solution. The American Jewish community in 2025 will be disproportionately ultra-Orthodox, with a shrunken base that is increasingly ethnocentric. If you think the Jewish institutional wagons are circled now, just wait until the circle is smaller.

At this point in a piece of this type, most writers would say, “But don’t give up! Don’t despair! Recommit yourself to fighting the good fight, to writing good checks, to being the change you want to see in the world!”

I’m not going to do that. I’m done. I’m in despair mode, and I’m not getting out of it. It’s December, after all. I think it’s better to give in to despair. Admit it. Kick the tires of it. How does it feel? Is everything really so terrible?

It’s a delusion that the microclimates we find ourselves in, at this conference or that social justice event, are really the weather of the world. In fact, the whole notion of “be the change” is highly misleading.

First, Gandhi, the supposed originator of the slogan, never said it. (I’ll return to what Gandhi did say in a moment.)

Second, it’s not accurate. You can be Zoroastrian, pescetarian, or anti-disestablishmentarian, but that will not bring change. Likewise, I don’t care how many vinyl bags you schlep to the supermarket, if we don’t have centralized, government-driven change in the regulation of U.S. power plants, you will not make a dent in climate change. Often, one person simply cannot make a (meaningful) difference.

Third, “be the change” is more than naïve. It’s a cozy way of retreating into our ideological cul-de-sacs, where everyone agrees. As long as everyone in my Facebook feed is “being the change” to support Bernie Sanders for president, then we’re doing our part and we’re done. We don’t need to dialogue with moderates, or support a candidate moderates could support, or look at any of the data on public opinion or voting patterns. Nope! I can just “be the change” and ignore reality.

The Jewish mainstream reality is a sinking ship. There are great, wonderful, fantastic things happening in the American and Israeli Jewish communities: great organizations, great people, great synagogues. There are mini-revivals happening all over the place.

But statistically, they are massively outweighed by demographic flight, conservative philanthropic dollars, and apathy. They’re like that one great art film — which really is great — surrounded by a multiplex of higher-grossing dreck. Most people are not that interested in it.

So, with all this despair, am I closing up shop? Am I giving up on Judaism, Jewish practice, and Jews?

Not at all! I’m headed to Miami to be a scholar-in-residence this week, I’m presenting a paper at the Association for Jewish Studies conference on December 15, and I’m leading a weeklong meditation retreat at the Isabella Freedman Jewish Retreat Center the week after that. Somewhere in there, I’ll even make it to the Forward holiday party.

But I’m doing these things without any delusions that they’re what the majority of American or Israeli Jews are doing — or that I’ll meaningfully impact the trend lines that define them.

Financially, I think there are sufficient resources and momentum in what might be called “boutique” Jewish communities to sustain these enclaves of creative Jewishness for at least a generation. Maybe more, given endowments and boards and buildings.

And creatively, I think ours is among the most fertile periods in all of Jewish history: more innovation; more hybridization; more exchange of the treasury of Jewish cultural, spiritual and communal resources.

I do not think any of these will “save the Jews,” if by this designation we mean the kind of large, multiplex-scale religious and cultural community that most of us have known all our lives. Most of these people don’t need saving; they’re leaving and they’re fine with that. We’re the ones who don’t like it.

But there are enough stewards of the Jewish heritage that it will not disappear from the earth. Even if Israel continues its spiral into moral bankruptcy, it’s highly unlikely that a nuclear power will simply cease to exist, even if its character is forcibly changed by an international community exasperated with a racial non-democracy.

And even if some large synagogues can no longer afford the upkeep of their edifices, there will be a vibrant, diverse shearit yisrael, a remnant of Israel, that, like the talmudic academy at Yavneh, will keep the fires burning for those of us still interested in them.

It’s an interesting spiritual practice to hold both sides of this equation — the renaissance and the ruin — simultaneously. Mass-market American Judaism, and mainstream political Zionism, have lost much of their integrity. And yet at the same time, the alternatives to both are exciting.

Here’s what Gandhi actually said: “If we could change ourselves, the tendencies in the world would also change. As a man changes his own nature, so does the attitude of the world change towards him… We need not wait to see what others do.”

Coming to Terms With Death of the Jewish Mainstream