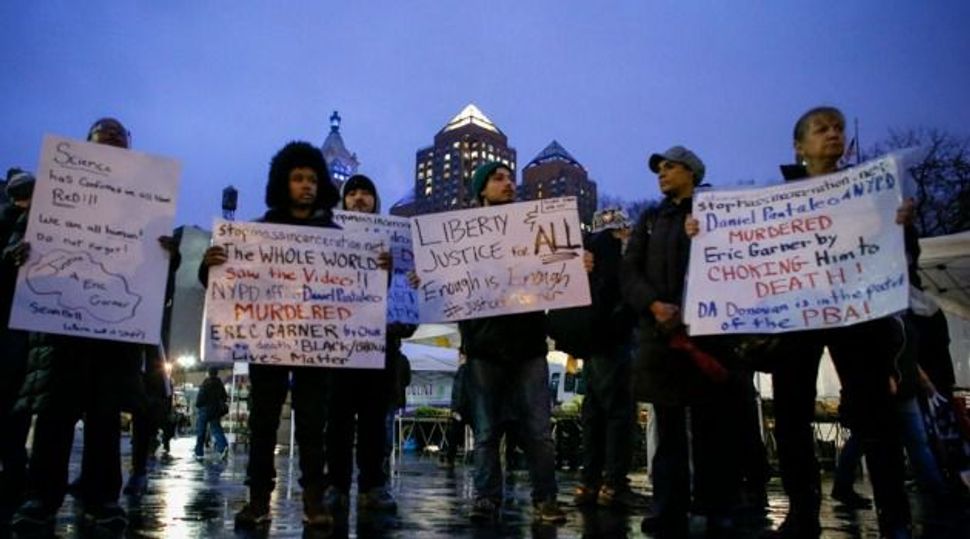 No Justice, No Peace: Demonstrators protest a grand jury’s decision not to indict a New York police officer in the chokehold death of Eric Garner. Image by getty images

My hands are quaking with rage right now, but I will choose to write rationally. I can’t believe this has happened again, and happened here, in my own backyard.

“This” being a grand jury failing even to indict a white police officer for killing an unarmed black man. Not even a trial. Not even a public hearing of the evidence.

And this time with a video of the entire incident, which is your moral responsibility to watch.

But I fear that my own city is soon to be engulfed in violence, and the violent people are right. So for that reason, I will try, if I can, to take refuge in reason, and in law.

But I want to focus on law, because it’s something we can do something about. Right after the Ten Commandments on Mount Sinai, after all, the Bible famously goes into a thousand tiny details of mishpatim, laws. By detailing everything from rules of evidence to the damages for a stolen lamb, the book of Exodus makes a strong claim: that the lofty moral imperatives of Sinai only have meaning if they are translated into just laws. The God is in the details.

American law, however, helped kill Eric Garner – and it will kill more black men like him in the future. Specifically, there is a lethal nexus between judicial deference to police officers on the one hand, and the expansion of police power on the other. Each alone is problematic, but together, they make justice nearly impossible.

First, courts have held for decades that the rules of engagement change in the context of an arrest. For example, police officers need a warrant to search your car – but if they’re arresting you, they don’t. They perform a “Search Incident To Arrest” (SITA), and are given wide latitude by the courts.

This doctrine makes sense, at its core. If a criminal has a shiv in his pocket, a cop shouldn’t need a warrant to pat him down. But the courts have expanded the doctrine so that all kinds of searches, not merely those protecting the safety of police, are now allowed.

Likewise the use of violence. So far at least, cops can’t just beat up anyone they see on the street. But once they make an arrest, and a suspect resists in any way, then most rules get tossed out the window. Chokeholds, for example, have been banned for 20 years by the NYPD, but that’s just a department policy, not a legal rule.

Legally, it’s very difficult to convict a police officer acting in his official capacity. As we saw in Ferguson and now again in Staten Island, the standards are all out of whack. If there’s some objectively-cognizable reason that an officer might feel in danger, s/he’s off the hook.

That is true, apparently, even in Staten Island. Watch the video again, and it’s painfully obvious that Pantaleo should at least be tried for his misconduct. Yes, Eric Garner is yelling and gesturing – although at a respectful distance from the police officers, before they try to cuff him. His only act of force is putting his hands up, shouting “don’t touch me.” The time from first bodily contact (0:34) to chokehold (0:38) is four seconds.

There is no way that Pantaleo’s chokehold isn’t at least manslaughter. But because of the structurally broken laws surrounding police conduct, disproportionate force that you can see with your own eyes isn’t even prosecuted.

Add to that the structural disincentives for prosecutors to go after police officers. As Rev. Al Sharpton said today, “we have no confidence in the state grand juries, whether in Ferguson or in New York, because there is an intrinsic relationship between state prosecutors and the police; they depend on the police for their evidence, they run for office and depend on the unions for endorsements.”

We certainly saw this in Ferguson, where prosecutor Bob McCulloch departed from accepted practice and, basically, didn’t prosecute at all, opting instead to lay out all the evidence and let the grand jury reach its own conclusions.

Can you imagine that on a Law and Order episode? “Ladies and gentlemen of the jury, I’m not going to make a case. Here is the evidence. Reach your own conclusions.”

So far, we have no inkling of what Daniel Donovan, the District Attorney, said or didn’t say to the grand jury. But we do know that Sharpton is right about the structural incentives in place. District attorneys need police cooperation to do their jobs – law and order, after all – and to keep them. The conflict of interest is obvious, even without race playing a role.

That’s the first jaw of the trap: wide deference to police officers, and a justice system incapable of holding them accountable.

The second jaw is “Broken Windows.”

When police were given such wide latitude by the courts, they were mostly arresting dangerous people. But since the 1990s, police tactics have changed. “Broken Windows” policing, first described in a 1982 article but pioneered in New York in the 1990s, rests on the theory that cracking down on small crimes, especially those that set a disorderly tone in neighborhoods, helps prevent big ones.

The evidence suggests that this practice doesn’t work. But whether it does or not, it unquestionably catches more small fish in the law enforcement dragnet.

As we should all know by now, Eric Garner was arrested for selling cigarettes on the street. Not entirely legal, but hardly a serious crime. It shouldn’t even be an arrestable offense – it should be a simple citation.

But then, “Broken Windows” wouldn’t achieve its real goal, which is to get people like Garner off the streets entirely. People like Garner: big people, loud people, slightly ‘off’ people, black people. Can anyone really search their hearts and say that race was not part of why Eric Garner was targeted? And why Officer Daniel Pantaleo so obviously overreacted?

“Every time you see me, you want to mess with me,” Eric Garner said to the police, a few minutes before they killed him. “I’m tired of it.”

Garner was right, of course.

So, add the two pieces together. Thanks to ‘Broken Windows,’ cops are arresting nonviolent, disproportionately black petty criminals all the time. And thanks to the laws governing police conduct, they then get wide latitude to beat the hell out of them, even kill them.

I’ve focused on these two elements, rather than race, because we can fix them. ‘Broken Windows’ policing must end, full stop. Even if it does marginally reduce the crime rate (which it appears not to), the costs – loss of life, perpetuation of racism, increased violence – are not worth the benefits.

And the legal standards of review for police conduct must change as well. All cops should wear cameras – even though clearly that didn’t help in Garner’s case. Legal rules with little common-sense meaning must stop giving carte blanche to those meant to protect and serve.

Let me add that this should be done for the benefit of police officers as well as those they police. Most cops aren’t bad cops. They deserve the trust of the neighborhoods they police. But they won’t get that trust when the legal decks are so stacked in their favor.

Having gone through this legal exercise, I now find it lacking. I don’t feel any less angry than I did at the beginning. I’m supposed to feel a sense of Jewish purpose now – we can fight for these changes, and be prophetic, tikkun olam, and all that. Here’s how we put our values into laws, and bend our laws toward justice.

But actually, all I feel is rage.