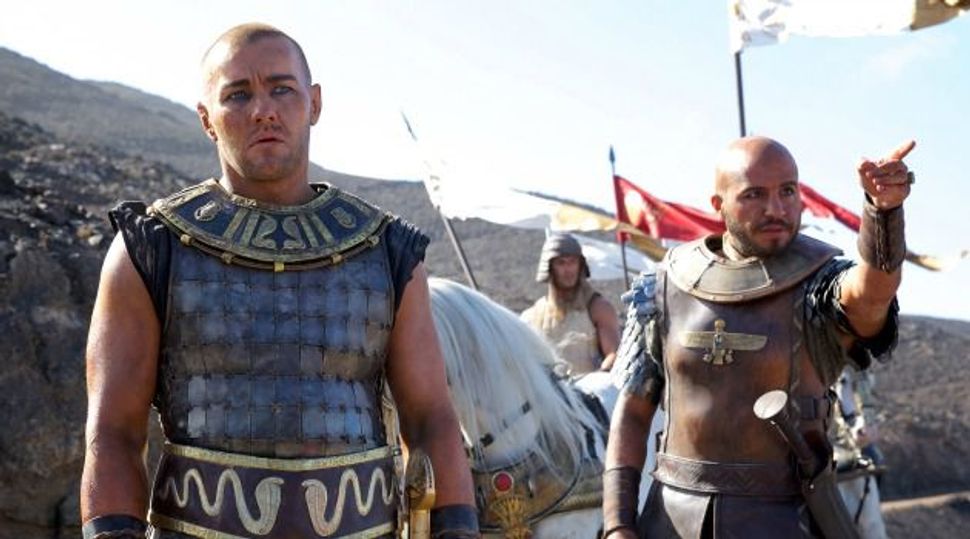 Joel Edgerton as Ramses in the upcoming “Exodus.” Image by getty images

Charlton Heston as Moses. Johnny Depp as Tonto. Mickey Rooney as Mr. Yunioshi. Laurence Olivier as Othello. Elizabeth Taylor as Cleopatra. All white actors who have played non-white characters on the big screen.

But don’t worry, there are some non-white actors in this movie — which is, after all, set in Egypt (part of Africa, last I checked). They have the honor of playing such roles as “Egyptian Lower-Class Civilian,” “Assassin,” “Thief” and “Servant.”

If you’re thinking, charitably, that perhaps Scott just never got the memo about how people in ancient Egypt weren’t exactly alabaster-skinned, think again. He’s fully aware that he whitewashed his movie — and he’s not even sorry about it. Not one bit.

Here’s what he told Variety in a November 25 interview: “I can’t mount a film of this budget, where I have to rely on tax rebates in Spain, and say that my lead actor is Mohammad so-and-so from such-and-such. I’m just not going to get it financed. So the question doesn’t even come up.”

I don’t buy this for a second, and neither should you.

Scott is not exactly making his directorial debut here. Between “Gladiator” and “G.I. Jane” and “Thelma & Louise” and “Alien,” he’s been around the block a few times. I’m pretty sure that just stating his own name at this point would be enough to get a movie financed — handsomely.

Of course, there is racism ingrained in Hollywood (and everywhere else), and so it’s easy to fall prey to a self-fulfilling prophecy: Directors assume people will be thrown off by a movie with black actors in lead roles, and so those actors don’t get cast, and so the cycle continues. That’s probably why so many people have spoken out in favor of Scott’s casting. Some have expressed reasonable arguments; others, like media magnate Rupert Murdoch, took to Twitter with gems like: “Since when are Egyptians not white? All I know are.”

Scott Foundas, chief film critic at Variety, stuck up for the director, mentioning that people are already up in arms about the movie’s whitewashed casting “no matter that the same could be said of ‘The Passion of the Christ,’ ‘Noah,’ ‘The Ten Commandments’ and virtually any other big-budget Bible movies.”

But the fact that whitewashing is so prevalent in Hollywood is not a justification for whitewashing. If anything, it’s the reason why a director like Scott — an established voice, not a novice still desperate to burnish credentials — has the responsibility to buck that trend.

That responsibility is thrown into even greater relief at a time like this. Scott’s comments to Variety were published only a day after the Ferguson grand jury announced its decision not to indict officer Darren Wilson for the fatal shooting of African-American teenager Michael Brown, sparking a national outcry over race relations in this country. The many protests since then have largely emphasized that racism is a systemic problem, built into the basic machinery of our society. That machinery, of course, includes Hollywood — and so Scott’s self-justification reads, right now, as particularly tone-deaf.

Considerations of race matter even more when doing a movie based on the Bible, the book humanity has long looked to for cues about how to shape society. Historically, the argument for taking the Bible literally has often been used to suppress people — think of gay and lesbian folks, for example. That makes it all the more striking when we’re faced with a case where being faithful to the historical record can actually be uplifting and revolutionary. What would it have meant to the black community if, say, Chiwetel Ejiofor — who won an Oscar for his lead role as Solomon Northrup in “12 Years a Slave” — had been cast as Moses in “Exodus”? We’ll never know, because instead of taking a built-in opportunity to correct Hollywood’s representation gap, Scott has gone out of his way to ignore it.

So, as much as I love a good Bible movie, I’m going to go ahead and boycott this one. And I invite my fellow Jews to join me. I mean, do we really want to watch an epic film in which Moses is played by Christian Bale? Hollywood can do better — and so can we.

Sigal Samuel is deputy digital media editor at the Forward.