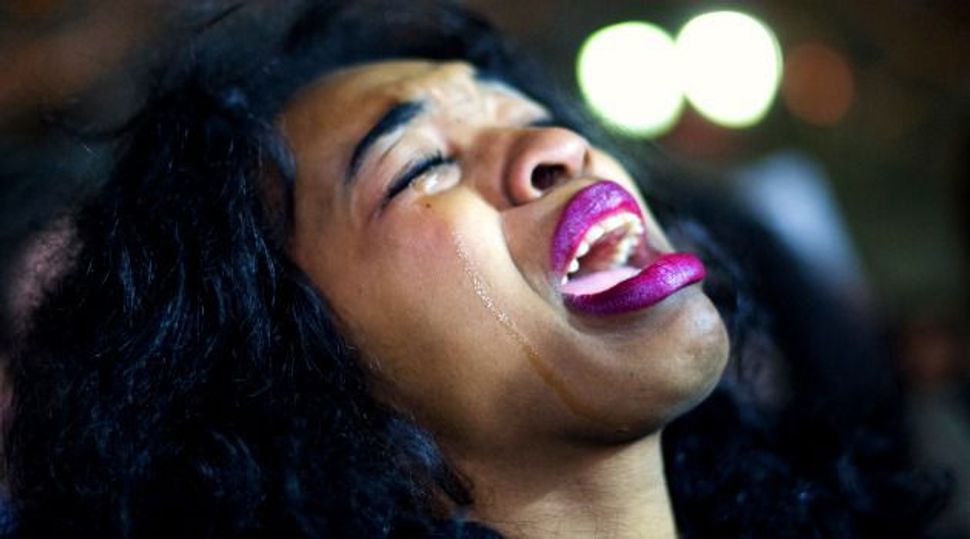 (JTA) — The words of Leviticus (19:6) admonish us not to “stand idly by while the blood of your neighbor is shed.” These words should sting our ears and shock our conscience in the wake of a Staten Island grand jury’s decision not to indict a New York City police officer who killed Eric Garner after using a chokehold, a long-prohibited technique, in attempting to arrest him for a simple misdemeanor — selling single, untaxed cigarettes.

Garner’s fatal encounter with police, including his cries for help, were documented on video. The medical examiner ruled his death a homicide. Can we imagine the likelihood of a similar outcome had Eric Garner been white? If he had been Jewish?

As a New Yorker and a rabbi, I believe the unfolding of these tragic events should disturb us on three levels. First, for the failure of justice in the grand jury decision. Second, for the discriminatory application of the system of “broken windows” policing, which led to the altercation that ended Eric Garner’s life. Third, because as Jews, we know what it means to walk in fear because of who we are, and we must empathize with anyone who faces discrimination today.

Broken windows policing is based on a theory that punishing minor quality-of-life infractions may help prevent more serious crimes. But whatever its merits, the policy is enforced with dramatic inconsistency in white neighborhoods and neighborhoods of color.

“There shall be one law for all of you,” insists Leviticus (24:22). Yet as applied by the NYPD, broken windows policing endangers many New Yorkers of color in the name of protecting others.

Longtime residents of my gentrified Manhattan block like to reminisce about when drug sales happened frequently on our corner and their kids’ friends weren’t allowed to come over because the neighborhood was so dangerous. Broken windows policing is intended to protect people who look like me, so we can safely walk home from the subway at night and feel good about our neighborhoods. But the policy led to the death of Eric Garner, a father of six, and has not made safer the lives of the many New Yorkers of color who have been victims of police violence and discriminatory police policies.

I love raising my children in New York City. My kids ask big questions about the complexity of their city every day and play happily on the sidewalk in front of our building. I have never been stopped and questioned by police while simply walking down the street or taking the subway. But is our illusion of safety coming at the price of the lives of people like Eric Garner?

According to a Quinnipiac poll in August, 72 percent of all New Yorkers and 96 percent of black New Yorkers believe police brutality is a serious problem. Yet 56 percent support enforcement of quality-of-life crimes. This case should open our eyes to the reality that this enforcement comes at a high cost in human dignity and human life, mostly to African-American men. Will those of us who benefit from this system stand idly by? Will we tolerate a dual system of justice?

Most white American Jews know both privilege and oppression. We experience the societal benefits of skin color and class, but also the fear of historical and rising anti-Semitism. We must not be complicit in a system that criminalizes people of color like Eric Garner but not the police officer who killed him.

Broken windows policing is actually deeply broken policing. We have a moral responsibility to oppose this injustice in solidarity with those who are most harmed by this policy — people of color, transgendered women, homeless people — both within and without the Jewish community. Passing the Right to Know Act, which is currently before the New York City Council, will strengthen police accountability and transparency, an important step toward ending broken windows policing and police brutality.

As I teach my children to be proud Jewish New Yorkers, I do so with the words of Deuteronomy (4:9) in mind: “Do not forget the things that you saw with your own eyes and so that they do not fade from your mind as long as you live. And make them known to your children and to your children’s children.”

Rabbi Ayelet S. Cohen is the director of the Center for Jewish Living at JCC Manhattan; co-chair of T’ruah, the Rabbinic Call for Human Rights; and a member of the Rabbinic Cabinet of Jews for Racial and Economic Justice.