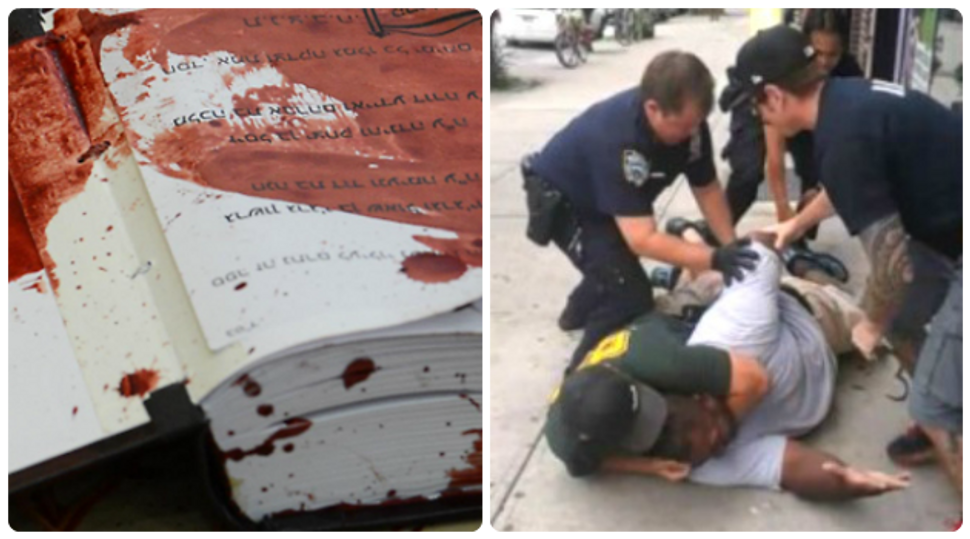 As I sit at my desk in a modern office building in lower Manhattan, the chants of angry protestors below grow louder. “I — can’t — breathe,” they shout, echoing the haunting final words of Eric Garner, whose death by asphyxiation I saw on video the day it occurred.

It was in that very spot, just over two weeks ago, in front of the same computer screen, that I learned of the horrific massacre in Jerusalem’s Har Nof neighborhood. The same spot where, also on the day of attack, I saw the photographs of men in blood-drenched prayer shawls sprawled across the reddened floor of a synagogue.

And as the shouts grow stronger, I realize just how similar we are. It has become a cliché in this country to note the disintegration of black-Jewish relations, not to mention its causes, and perhaps even more so to lament it. Gone are the days when Jews and black folks suffer the same discrimination, prohibited from entry to the same restaurants and public pools. But the images of recent weeks trigger the most terrifying episodes in our respective histories, reminding us that it is in the imagery of our past that we have often found commonality.

While the two events are not the least bit similar, the memories they evoke are. For black America, the image of an unarmed black man dying at the hands of a white cop evokes the burning highways of Mississippi and the streets of Alabama, where the bodies of black men would dangle for hours on makeshift gallows and mob-stitched nooses. Hundreds of years of terror and injustice.

To Jews, a photograph of murdered rabbis in Jerusalem, tefillin still tightly wrapped about their arms, is never just a photograph of one event. It is a flashback to Kovno, to Slobodka, where rabbis were beheaded as they poured over their last page of Talmud. And the flashbacks go back further, to Kishinev, to the Juderia of Spain, and of course right back to the destruction of Jerusalem.

Students of Talmud could scarcely see the face of Rabbi Moshe Twersky, a worthy descendant of two rabbinic dynasties, without being reminded of that most famous of Talmudic stories from Menachot 29b. Moshe asks God why He is placing so many calligraphic adornments on the letters of the Torah. And God says that after many generations, a certain man, Rabbi Akiva, “will interpret piles of laws upon each and every jot.”

Intrigued, Moshe asks to see this man, and God says, “Look behind you.” Moshe finds himself in the back row of Rabbi Akiva’s classroom, mesmerized and lost in the complexity of his analysis. Humbled by Akiva’s brilliance, Moshe asks what great reward Akiva receives for his toils in Torah. “Look behind you,” God says again, and Moshe “sees them weighing his flesh [Akiva’s] in the meat market” after it has been combed off by Roman occupiers.

In horrified dismay, Moshe, ever the Egyptian vigilante pursuer of justice, turns to God. “Master of the Universe, this is Law and this is its reward?!”

The elusiveness of justice is woven into the fabric of Jewish and black history alike. And the story of the Talmud is our heritage declaring that injustice will always occur. I can just as soon see Rev. King, who also gazed from the mountaintop, turning to the founders and saying, “This is Law and this is its execution?”