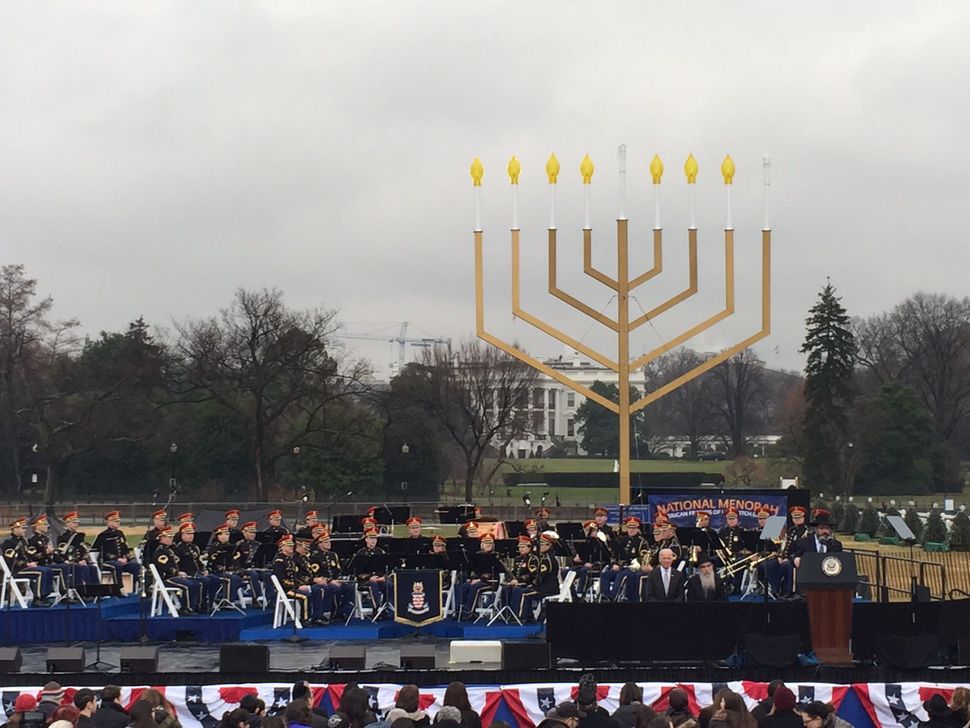 Why did sitting in my father-in-law’s Chicago hospital room two weeks ago crystallize the meaning of Hanukkah?

Because so many rabbis had talked to me about light, and I saw it there.

How to say this without treacle?

My husband’s mother and his twin sisters never left. Or barely left. They just sat and read, worried and chatted, knitted and parsed blood pressure readings and dialysis cycles. They didn’t flag; they just stayed.

When my husband and I visited with our children, we all camped out, too.

And suddenly all these rabbinic metaphors became very concrete: The darkness lifts simply because we keep each other company. The oil defies the odds because it once did and you believe it can again.

Each person who showed up at the hospital — each niece, each brother-in-law — seemed like another candle. The room grew palpably brighter with each arrival.

My mother-in-law, Phyllis, leaned over to me at dinner one night and said, “I could see the difference; it infused Milt with energy, being with you all.”

Indeed, Milt was soon regaling us with jokes about his military dreams and a deconstruction of the American folk ballad “Oh My Darling, Clementine.”

He was discharged from the hospital a few days after we left, back on his feet for the first time in weeks, starting physical therapy and marking his 57th wedding anniversary.

I’ve read so many teachings about adding light on this chag urim, or Festival of Lights — how we illuminate the darkest time of year and trust there will be a brighter day.

“Jews light lights not to banish the darkness,” Reconstructionist Rabbi Barbara Penzner writes in “A Guide to Jewish Practice,” “but to be reminded of the miracles of everyday life.”

Last Friday, Rabbi Melissa Weintraub posted on Facebook: “The greatest revelation of Godliness is the light that emerges from darkness.” (Zohar 3:47b)

Light despite the unlikelihood of light.

Rabbi Mychal Springer, Director of the Center for Pastoral Education at the Jewish Theological Seminary, invited me to sit in on one of her classes, during which a student recounted a recent bedside visitation. He described a patient who was so delusional that he insisted on preposterous events being true. Springer gently nudged the student to worry less about setting the record straight: “Think about whether you were making him feel heard or judged in that moment,” she advised.

The power of comfort — from strangers or the people closest to us — came up again when I asked Springer to expound on the Talmudic debate between the rabbis Hillel and Shammai as to how to properly light a menorah.

Hillel’s approach, which obviously carried the day, adds one more candle each night. But Springer finds great resonance in Shammai’s way: lighting all eight candles the first night and decreasing one each day.

“Shammai reminds me that we treasure that light for as long as it remains, without needing to pretend that it’s going to last forever,” Springer said.

She added that Shammai’s approach can prompt a conversation about the power of community — the same power I glimpsed at Milt’s bedside. “The ritual of lighting the menorah brings people together to do it, right?” she asked me.

“Every night we’re witnessing that there’s less light, but the people are still together, night after night, and the diminishment of light is possible, or tolerable, because of the people being together. There’s a commitment to not walking away that brings light. As the light is dimmed, the people keep coming back. And by the time you get to the eighth day, you’ve been coming back a lot, and it builds intimacy; it builds community.”

Those two words — intimacy and community — were in my head last Wednesday evening, December 17, as I waited in the cold on the long line to get into the White House Hanukkah party. I’d been invited by Matt Nosanchuk, who directs outreach to the Jewish community on behalf of the President, and I brought my teenage daughter, Molly, who came on the train straight from school without a proper sweater. The line extending down Washington’s 15th Street was like a cocktail party by itself, with people spotting friends or meeting line mates, marveling at how this event would have been unimaginable to our grandparents and their parents.

Once through security, the proverbial Hanukkah light was felt (at least by me) not just in the buzzy excitement of being in the White House, but, ironically, in the White House’s Christmas decorations. I didn’t feel excluded by the multiple Christmas trees, wreaths and garlands; on the contrary, they dramatized even more clearly that there were 500 Jews milling among them — many in yarmulkes, some in sheitels — eating latkes and lamb chops from a White House kitchen made kosher for the occasion.

When my congregation’s Asian-American senior rabbi, Angela Buchdahl, stood alongside the African-American president and led us in the Hebrew blessing over the candles, there was a moving magnificence both in that unlikely tableau and in the sound of a Jewish prayer filling The People’s house.

The menorah for the occasion was created out of olive wood, clay and iron by the children of Yemin Orde Youth Village, in Israel, a residential program for at-risk children, which my family visited three years ago.

There was light in the White House that night.

We all know the many ways that people personally experience darkness: as doubt, despair, loneliness, regret, illness, grief. This Hanukkah I’ve become hyper-conscious of when that darkness eases, when light creeps in or even blazes.

I felt it when I held my father-in-law’s hand and he asked, “What’s shaking, baby?”

I felt it watching my mother-in-law monitor his care more vigilantly than any doctor.

I felt it on the first night of Hanukkah, when I stood on Washington’s rain-soaked Ellipse lawn and watched Chabad Rabbi Levi Shemtov ascend in a cherry picker to light the first candle atop the giant National Menorah. The sight of Vice President Joe Biden in a yarmulke and the White House glowing behind the massive hanukkiah, brought home — in the most visceral way — how far we’ve come. As Shemtov told me before the ceremony began, “It’s an unfettered practice of faith on America’s front lawn.” 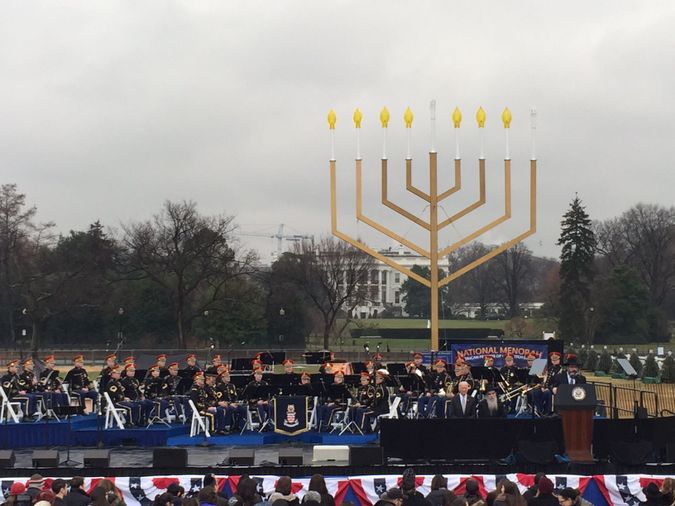 I felt it in Obama’s remarks to all of us: “The Hanukkah story teaches us that our light can shine brighter than even we could imagine.”

And I felt it earlier this month, when I co-moderated an event called “Hanukkah Reignited” at JTS, hearing representatives from nearly every branch of Judaism dissect the holiday, and then listening to 20 cantors from New York-area synagogues sing Peter Yarrow’s “Light One Candle,” led by Yarrow himself. It is a song I learned young, which now raised the roof in a luminous moment of musical unity.

Call it sappy, but at this time of year, I’m pro-sap.

Abraham Joshua Heschel wrote, “We are called to bring together the sparks to preserve single moments of radiance and keep them alive in our lives, to defy absurdity and despair, and to wait for God to say again: Let there be light. And there will be light.”