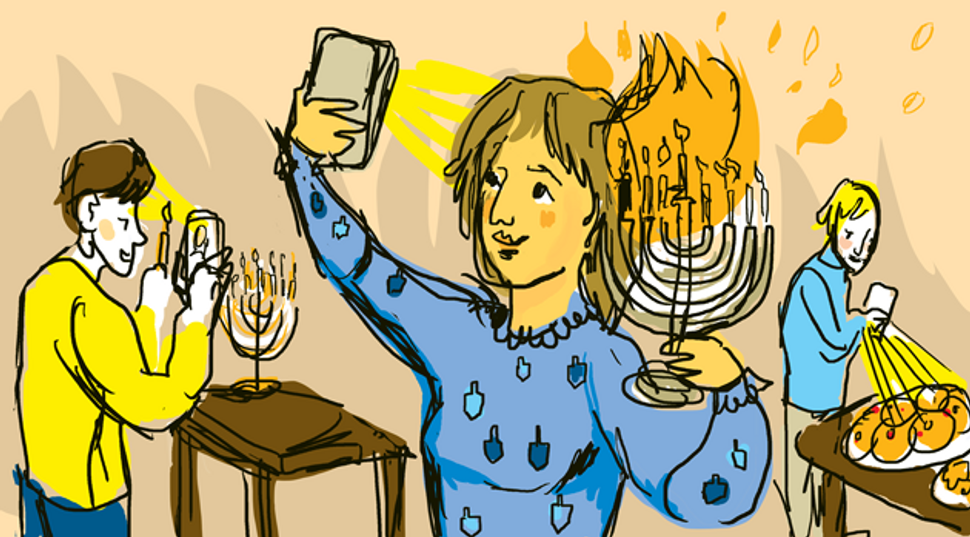 A friend of mine on Facebook joked, “Can you fulfill pirsumei nisa (the commandment to publicize the Hanukkah miracle) by posting pictures of your menorah online?”

It’s a fun, quasi-halachic question that juxtaposes an ancient commandment with contemporary technology. But it’s also a reflection of how much amateur photography has become part of our lives. In that same Facebook feed, I must’ve seen a dozen snapshots of candles blazing, over tin foil and glass, all oddly alike.

The ubiquity of camera-enabled smartphones, coupled with the information technology to instantly share their productions, has revealed (or created) a widespread human need to capture and share everything that happens to us. Along with menorahs, my Facebook feed included thoroughly uninteresting pictures of sufganiyot, latkes, dreidels and gelt. The Hanukkah miracle has been extended: the holiday seems like it only lasts eight days, but there’s enough bandwidth to preserve it well into the next century.

Unlike others of my generation and those older than me, I come here not to bash selfie culture, but to query it. There is something moving, really, about the human desire to share moments in our lives with those who are dear but not near. The lighting of the Hanukkah menorah is often a sweet, transitory occasion, marking the season, the solstice and the passage of another year of our lives. It is the quintessentially Jewish fusion of linear time and cyclical time: in the recurring cycle of holidays, the progress of linear time is experienced.

At the same time, to grab on to these fleeting moments and preserve them is to fight the passage of time they reflect. We know this is futile, but we do it anyway. I have photographs of Hanukkah past, and although the menorah may be the same, there are usually enough details that I can remember where I was in 2004, 2007.

Of course, I can remember those Hanukkahs without visual prompts as well, but it’s nice to have the images in my computer’s Pictures folder, I suppose.

There’s also a social element to the culture of snapshots and selfies — as the term “social media” itself implies. If I share my sacred moment with you, I am not alone. Especially for friends and family scattered across the country, social media bridges the gap, even if it doesn’t fill it.

Here, I’ve noticed, the desire to share turns into compulsion. Is it not sufficient that I experience this moment, perhaps by myself, and then it is gone? What gaps, exactly, am I trying to fill? Many of us have been with people (often teens or millennials) who constantly, even addictively, text, Vine, and Tweet every meal, sunset and night on the town. It’s as if a moment isn’t real unless it is shared. We become like the stereotypical Japanese tourists, seemingly more interested in documenting an event than experiencing it.

Incidentally, the truth behind the stereotype is that showing off one’s photographs, in some Japanese cultures, is indeed a form of conspicuous consumption. I’ve been here, I’ve been there. The photos themselves are a kind of evidence.

Just recently, I was on a train heading back to New York through a light rainstorm. At the point in Maryland where the train tracks cross the upper reaches of the Chesapeake, a fog enveloped us. Suddenly, we were gliding ghost-like through a mysterious landscape of greys and whites.

I reached for my phone, already frustrated that I probably couldn’t get the shot in time. Fortunately, that realization allowed me to put down the device and sink into the visual experience itself. This moment would not be shared; it is mine alone — except for whoever else on board was paying attention, of course. It will only last a few seconds. And I will not remember it forever.

That moment felt well-lived. It was, perhaps, what Virginia Woolf called a “moment of being” at which the various conceptions and contexts in which we all live paused for an instant, and the bare experience of life could be felt. Like a sacred season, like many works of art, like our lives themselves, it was real because it was transitory. Already, I am recounting it to you from incomplete memories. The moment itself cannot be retrieved or recreated.

Hanukkah observance itself pushes against the value of the transitory. We increase the light, not decrease it. We are encouraged to make the miracle known to others. We give gifts that hopefully will not be thrown away.

These acts, though, seem to be acts of resistance, like the kindling of light (Christmas, Hanukkah, Diwali) itself, to the reality of winter and the passage of time it connotes. The resistance is human — like the urge to preserve and share moments of solitary evanescence. In a quiet way, we are raging against the dying of the light.

But as I have encountered life’s passages in particularly vivid relief this year, I also find a blessing in acquiescence. Time passes, and things pass away. Moments of beauty arise and vanish. So do seasons, and so do lives.