How To Be a Modern Maccabee Without Getting Arrested 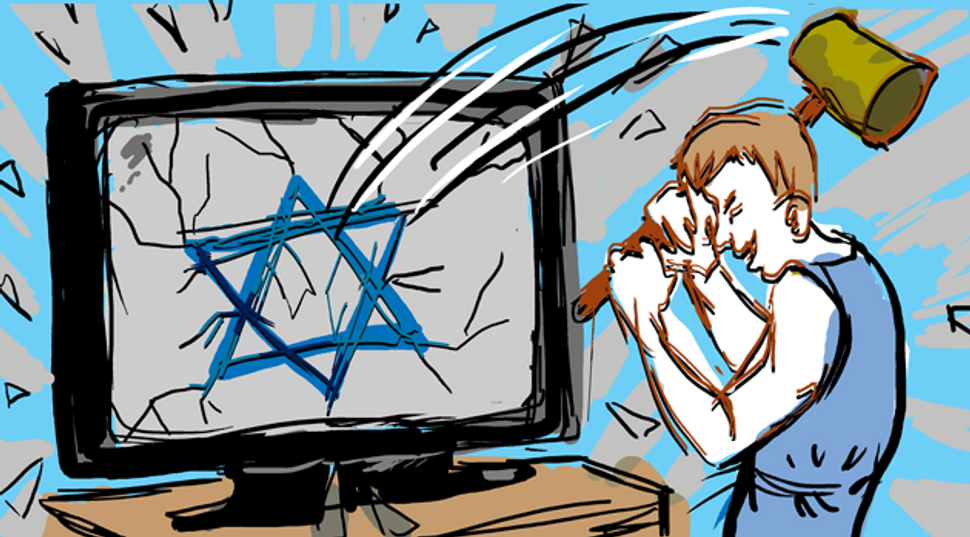 Despite having nearly no religious significance, Hanukkah stands out as an important cultural event for American Jewry. American gentiles view it as the quintessential Jewish holiday, mostly due to its calendar proximity to Christmas and its inclusion on holiday TV programs. Jewish symbols featured in ads are used to get the Jewish population to participate in “holiday season” consumerism. This is a part of TV’s much broader role in assimilating Jews and other minority groups into America’s capitalist culture. Which is a great irony, because the Hanukkah story is about a revolt against those attempting to acculturate the Jewish people.

My religious upbringing, one typical of a Conservative Jewish family in America, included joyous celebrations of Hanukkah filled with community, bonding and gifts. We sat around the table eating traditional home-cooked meals with lit candles in our menorahs. My brothers and I particularly enjoyed the celebration, since it did not include any dense prayer sessions like other holidays. On occasion we were told the story of Hanukkah: Long ago, Jewish people led by a group known as the Maccabees, whose name is taken from the Hebrew word meaning “hammer,” re-gained control of our holy Temple. Those Hebrew people found one day’s worth of oil that burned miraculously in the Temple’s candelabra for eight days.

The cute oil miracle narrative is a common, child-friendly alternative to the graphic version of the story about the seven-year Maccabean Revolt against the occupying Seleucid Empire. According to Jewish texts, a significant portion of the Jewish population in Jerusalem had become Hellenistic and sympathetic to the occupying power after many years of acculturation. A decree was supposedly given that forbade Jewish religious practice and all were forced to worship Greek gods. This sparked a guerrilla revolt led by the rural Judah Maccabee and his militants. These Jewish heroes attacked not only the occupying force, but Hellenistic Jews as well. The Maccabees smashed the public Pagan altars of acculturated Jews and even forcefully circumcised their boys.

The Jew-on-Jew attacks in Maccabean times are fascinating because Jews corrupted by outsiders were seen as just as deserving of violent retribution as the oppressing force. I do not accept these stories without criticism, of course. Why is it that Jews have made legends of those who forcefully circumcised children? Even if restoring the basic tenets of Judaism required violence against our own people, the Maccabees were not without what most would now consider crimes against humanity.

Hanukkah was not the only time I heard stories about warrior-heroes in my Jewish upbringing. My grandmother, an Auschwitz survivor, often told me stories of Jewish struggle in the Shoah, including tales about my great-uncle, a Nazi-killing Partisan fighter who also survived the war. I have long identified with stories of Jewish resistance and, growing up, I sometimes imagined myself as a righteous Jewish freedom fighter in a dystopian future where society may once again attempt to eradicate Jewish people by means of mass-murder or forced cultural assimilation.

As I grew older, I began to realize that Jews are living in a time when there are great efforts to strip our cultural identities from us. Many Jewish people have been corrupted by a capitalist society that promotes war, inequality and obedient homogenization. Finding inspiration in the story of the Maccabees, as well as questioning their transgressions, I wonder what truly subversive and righteous act parallel to smashing Pagan altars and circumcising young boys could be done in order to help transition acculturated American Jews to a life based on Jewish ethics.

One of my first thoughts was to break into countless Jewish homes and smash their contemporary altar of acculturation. All of their TV sets would be imbued with a sledgehammer-sized hole, accompanied by a signed note from the Modern Maccabee containing information on the exploitative elements of American society and encouragement to participate in righteous activities to fill the void of free time that TV once occupied.

If I were to act on this fantasy (I am not going to and am not encouraging others to try), I don’t have a doubt in my mind that I would be pulled out of my home by the police, shackled, brought up on hate crime or terrorism charges, and shunned by the Jewish establishment. An action like this would probably have little impact. It might come up in conversation around a few Hanukkah tables — right after they tell the story of the Maccabees (of course, forgetting to mention that their heroes violently took knifes to countless baby’s genitals) and right before they give their children $25 gift cards.

Instead, I’ll just encourage you to be a modern Maccabee and smash your own TV this holiday season. It might be one of the greatest gifts you could give to yourself and your family. With all the extra time you will have previously spent watching TV, you can dream of more constructive actions inspired by the Maccabees and work towards bringing them to fruition.

How To Be a Modern Maccabee Without Getting Arrested